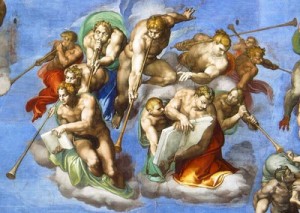 Today, Jesus describes a cataclysmic future event in a very old way.  Why?

To understand today’s reading, we must set it within its context in St. Mark’s Gospel.  In Mk 13:1-2, we see that as Jesus and His disciples left the Temple one day, one of His disciples said to Him, “Look Teacher, what wonderful stones and what wonderful buildings.”  All Jews revered the Jerusalem Temple.  It was the one place on earth where God and man could meet.  Thus, it was the focal point of their national identity as God’s chosen covenant people.  Surely the disciples expected Jesus to echo the sentiment about its great beauty and worth.  After all, on one of His visits to the Temple He had, Himself, cleansed it of desecration (see Jn 2:15).  Jesus must have surprised them with His response:  “Do you see these great buildings?  There will not be left here one stone upon another, that will not be thrown down.”  What did He mean?

When asked privately by several of the apostles (read Mk 13:3-23) about the details of His pronouncement, Jesus began to describe for them the coming destruction of the Temple, which took place in 70 A.D. at the hands of the Roman army (about one generation after this conversation, so many in the group lived to see it).  It was to be a time of terrible suffering.  The disciples’ own fates would be intertwined with this turmoil and transition in Jerusalem.  The Temple, amidst horrific conflict, would be destroyed (never to be rebuilt), but the Gospel, through the preaching of the disciples, would be triumphant, announcing the Good News not only to Jerusalem but also “to all nations” (see 13:10).

In today’s reading (13:24-32), Jesus describes what lies ahead using words and phrases from many Old Testament prophecies.  His reference to cosmic fireworks (“the sun will be darkened, and the moon will not give its light”) is not a literal description.  The prophets frequently used these phrases to describe God’s judgment on and the downfall of powerful pagan nations (see Isa 13:9-10; 34:4; Ezek 32:7-8; Joel 2:10, 31; Amos 8:9).  The coming judgment on Jerusalem for refusing to believe in the Messiah and for emptying the covenant of its true meaning was going to be a world-shaking event.

The destruction of the Temple, however, was not just the end of a beautiful building.  It brought to a conclusion the long history of animal sacrifice for sin in Israel’s worship.  When Jesus made His own sacrifice on the Cross and rose victorious over death, He became the fulfillment of all that had come before Him.  To emphasize this, Jesus says that at the conclusion of the cosmic upheaval (the judgment on Israel and the destruction of the Temple), the disciples will see “the Son of Man coming in the clouds with great power and glory.”  These are words from the prophet, Daniel, who had seen in a vision the ascendancy of “one like a Son of Man” over defeated earthly powers.  After the tumultuous defeat of a succession of pagan kingdoms, the Son of Man was seen coming “with the clouds of heaven” to receive an eternal kingdom from “the Ancient of Days” (see Dan 7:13).  Jews listening to Jesus that day would have been very familiar with Daniel’s vision and terminology.  It was a prophecy of God’s ultimate victory over all earthly powers and the establishment of a new, everlasting kingdom of God’s people.  That is precisely what began when the Temple in Jerusalem was destroyed.  The “Son of Man,” Jesus, is God’s new Temple.  He is the new and definitive meeting place of God and man.  The “beautiful stones” in this Temple are believers, “the elect from the four winds, from the end of the earth to the end of the sky” (see 1 Pet 2:5).

What began within history—the destruction of the Temple and the establishment of the Church—will also have its consummation within history.  That is what we await in the Second Coming of Jesus.  The full manifestation of what has already happened and is already taking place will finally be revealed for all to see.  We are, of course, always curious about the details of this final event in salvation history.  In this, we do well to heed the wisdom of Pope Benedict XVI:

“… we can understand the significance of Jesus choosing not to offer a description of the end of the world, but rather to proclaim it using words already found in the Old Testament.  Speaking about things to come using words from the past strips these discourses of any temporal frame of reference… It becomes clear that the word of God from the past illumines the essential meaning of the future.  Yet it does not offer us a description of the future:  rather it shows us, just for today, the right path for now and for tomorrow.  Jesus’ apocalyptic words…are intended to deter us from mere superficial curiosity about observable phenomena (cf. Lk 17:20) and to lead us toward the essential:  toward life built upon the word of God that Jesus gives us; toward an encounter with Him, the living Word; toward responsibility before the Judge of the living and the dead.”  (Jesus of Nazareth, Part II, Ignatius Press, pgs 51-52)

Possible response:  Lord Jesus, please help me remember that speculation about Your return is a distraction from my vocation to holiness.  Doing Your will is what matters.

Here is one of the apocalyptic visions given to Daniel by God while he was living in exile in Babylon.  He foresaw a time of great tribulation and suffering for God’s people, but he also saw hope.  This is always God’s message to His people!  Daniel sees Michael, “the great prince,” acting as guardian of Israel.  After their trials, he describes a future that includes resurrection and judgment.  “The wise” shine brightly, “like the stars forever.”  This offer of hope sustains God’s covenant people, then and now.  St. John uses similar terminology to describe his heavenly vision in the Book of Revelation.  It helps us understand the real world in which we live—a world of sorrows, troubles, trials.  We cannot allow ourselves to be overcome by these realities.  Jesus reminded us of this when He said, “In the world, you will have tribulation.  Be of good cheer; I have overcome the world” (see Jn 16:33).

Possible response:  Heavenly Father, thank You that hope is always Your message to Your people.

The psalmist, David, writes about his confidence in God during times of great distress:  “I set the Lord ever before me; with Him at my right hand I shall not be disturbed.”  He writes prophetically about God not abandoning his soul to the netherworld or suffering His “faithful one to undergo corruption.”  He is speaking here not of himself (see Acts 2:29-36), but of Jesus, the Son of David, Who slept “in the dust of the earth,” as Daniel prophesied, but Who awoke to “live forever.”  For those who hope in God, no matter what life brings, their confidence can rest in the “fullness of joys” they will know in God’s presence.  The world wants to make us believe that this life, with all its difficulties, is all that is.  We know better, so today we sing our antiphon, “You are my inheritance, O Lord!”

This reading helps us put the destruction of the Temple and the reign of the Son of Man into biblical perspective.  The author of Hebrews shows us the shortcomings of the sacrificial system of the Old Covenant.  The blood of animals “can never take away sin.”  The ritual practice of animal sacrifice was always meant to be a “tutor” for God’s people (see Gal 3:23-29), preparing them for its fulfillment.  Jesus made “one sacrifice for sins,” Himself.  Now, He is at God’s right hand as “He waits until His enemies are made His footstool.”  We are now in that time.  As the Gospel spreads out to all the nations, conquering sin and death, Jesus’ enemies are being vanquished.  At some point, this work will be completed, and Jesus will return to usher in the life of the world to come, where we will find that “by one offering He has made perfect forever those who are being consecrated.”  May we wait with patience and joy.

Possible response:  Lord Jesus, You are, even now, making Your enemies Your footstool.  Increase my faith to believe that!

One thought on “Thirty-third Sunday in Ordinary Time—November 15, 2015”