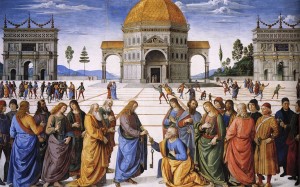 The disciples tell Jesus that people don’t know His true identity, but Peter, who did, was told not to tell them. Why?

St. Mark describes a conversation Jesus had with the disciples about His identity. He asked about the buzz on the street: “Who do people say that I am?” The answers were all wrong. Pressing the point, He asked them, “But who do you say that I am?” Peter got it right: “You are the Christ.” One might think Jesus would be eager to get the misperceptions cleared up. Why not commission Peter, on the spot, to go out and spread the good news? Instead, “He warned them not to tell anyone about Him.” Curious.

If we wonder why the time had not yet arrived for broadcasting Jesus’ identity, the next few verses help us understand. Jesus began to describe, in great detail, His Passion, Death, and Resurrection. St. Mark emphasizes for us how clearly Jesus said these things: “He spoke this openly.” Look at Peter’s response. In a tender way, Peter “took Him aside and began to rebuke Him.” Although Peter knew Jesus to be “the Christ,” or Messiah, did he really have a clue about what that meant? Imagine taking the Messiah aside to correct Him. Peter was in way over his head. In fact, this appeal to Jesus to turn away from the path of suffering smacked of the temptation Jesus had faced in the wilderness, when Satan tried to divert Him from God’s way of winning salvation for the world.

“Get behind Me, Satan. You are thinking not as God does, but as human beings do.” What a sharp rebuke! Jesus is not suggesting that Peter has now become the property of Satan. See how He says, “Get behind Me,” rather than, “Be gone.” Jesus wants Peter to follow Him, not to try to lead Him away from His destiny, even though it includes great suffering. He is using the word, “Satan,” for the sake of its meaning, which is “adversary.” All men naturally shrink from physical pain and death. It is no surprise that Peter tried to talk Jesus out of His dangerous plan. God, on the other hand, desired His Son to pass through suffering—and lots of it—in order to conquer it, then to hallow it. Once Jesus completed His work on the Cross, He sanctified for all time the loss of life that leads to saving it. He not only embraced His Cross, but He also called all His disciples to do likewise: “For whoever wishes to save his life will lose it, but whoever loses his life for My sake and that of the Gospel will save it.”

Why wasn’t Peter ready to go out and spread the news about Jesus? Peter had only known Jesus as the miracle worker, the healer, the One whom even the wind and seas obeyed. He needed to learn that Jesus was also the Suffering Servant prophesied by Isaiah, the One who would be like a sheep led to the slaughter. The Messiah would accomplish His plan in both strength and weakness. Until we are ready to follow Jesus wherever He leads (not trying to suggest an alternate plan that does an end run around suffering), we don’t really know Him—yet.

Possible response: Lord Jesus, in honesty, I never like to be reminded that following You means losing my life. Forgive me for when I’ve tried to be like Peter, looking for a different way.

Isaiah’s prophecy, so many years before Jesus was born, reminds us that the Messiah God promised to send to Israel was always destined to suffer. In chapters 50-55 of his book, Isaiah describes Israel’s “Suffering Servant.” The descriptions are so graphic that we cannot fail to see that they point to Jesus. The reason the Jews in Jesus’ day stumbled over His identity was because they expected (and wanted) a Davidic Messiah—a great king who would restore the glory of Israel. They did not expect Isaiah’s Suffering Servant. Even Peter, in our Gospel reading, can’t abide the idea of the Messiah’s suffering. And it got him into trouble.

Here, we see Isaiah describing one who stays the course of God’s plan, even in the face of physical brutality: “I gave my back to those who beat me, my cheeks to those who plucked my beard; my face I did not shield from buffets and spitting.” How can this man endure such treatment? His confidence in God conquers any fear or temptation to turn back: “The Lord God is my help, therefore I am not disgraced; I have set my face like flint, knowing that I shall not be put to shame.” It was, indeed, the confidence of the Son in His Father’s love that enabled Jesus to endure His Passion and Death. That explains His flinty rebuke to Peter in the Gospel, warning him not to think as humans do. Jesus knew Himself to be both Davidic king and Suffering Servant, not one without the other. In the end, on the Cross, He was the only One, apart from Mary, to know this. After His glorious Resurrection, the words of Isaiah would be most appropriate on His lips: “See, the Lord God is My help; who will prove Me wrong?”

Possible response: Heavenly Father, help me set my face like flint toward You today, not turning back out of self-indulgence or distraction or fear.

This psalm helps us see why we should not fear the suffering that comes to all servants of the Lord: “I love the Lord because He has heard my voice in supplication, because He has inclined His ear to me the day I called.” The psalmist prophetically speaks of a time when one of God’s “little ones” would be “brought low.” Jesus was that “little one,” Whom “the cords of death encompassed” and “the snares of the netherworld seized.” Jesus knew that beyond His death was the Resurrection, as He told His followers “openly” in our Gospel today. He could pass through death, because the psalmist’s words were His own: “I will walk before the Lord, in the land of the living.”

St. James asks a pointed question: “What good is it, my brothers and sisters, if someone says he has faith but does not have works?” What good would it have been to Jesus (or us) if He had faith in His Father but was unwilling to go to the Cross? Our faith will always cost us something in action. Practically speaking, St. James tells us that our faith in God will mean acting on behalf of the needy who appear in our lives. We demonstrate our faith by our willingness to sacrifice ourselves (our convenience, our money, our energy, etc.) on behalf of others. This is simply doing on a small scale what Jesus did on a cosmic scale. Seeing our need for salvation, He left Heaven so that He could, in Himself, provide “the necessities” for our bodies—clothing us in His righteousness and feeding us on Eternal Bread.

Jesus has demonstrated His faith from His works; He calls us to do the same.

Possible response: Lord Jesus, help me keep my faith alive by keeping it active. Help me act for others as You have acted for me.

One thought on “Twenty-fourth Sunday in Ordinary Time, Year B—September 13, 2015”