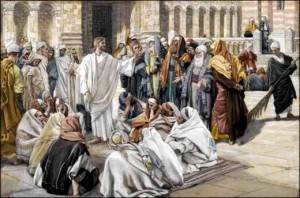 The Pharisees ask Jesus a question about hand washing before meals and wind up being called hypocrites. What happened?

St. Mark tells us that some Pharisees and scribes came out from Jerusalem to observe Jesus (He was ministering in Galilee, to the north). He had been curing many people and was attracting significant crowds (see Mk 6:53-56). However, rather than being impressed by this miraculous work, “the Pharisees and scribes questioned Him, ‘Why do your disciples not follow the tradition of the elders but instead eat a meal with unclean hands?’” It’s an odd question, considering all the others they could have asked Him. They were focused on the “tradition of the elders” concerning ritual washing—not just hands, as St. Mark tells us, but “cups and jugs and kettles and beds.” We need to understand that this “tradition of the elders” was not part of the Law of Moses. The Pharisees placed heavy emphasis on separation from Gentile culture as the only way to maintain ethnic identity while they lived under foreign domination. The elaborate washing rituals intensified this separation and need for purity, and, in Jesus’ day, had been elevated to the same status as the Law.

Still, why did Jesus erupt with His charge of hypocrisy when they asked about their tradition of hand washing? What does He see behind the question? He must have seen their hearts. That is why He quotes Isaiah: “This people honors Me with their lips, but their hearts are far from Me.” What did He mean? In verses not included in our reading, Jesus describes how the Pharisees had developed a way of “rejecting the commandment of God in order to keep [their] tradition.” He goes on to describe an example. Even though the Law of Moses required Jews to honor their parents, the Pharisees had figured out a way to piously avoid obeying that law with one of their “traditions.” They could simply declare that any assets they might have used to help care for their parents were “corban,” or dedicated to God’s service. It is wonderful, of course, to dedicate money to God’s service, but that can’t be done instead of caring for elderly parents. In that case, their “tradition” had allowed them to “disregard God’s commandment” and “cling to human tradition.” Jews who lived that way may have honored God with their lips and with other external pious rituals, like washing, but their hearts were far from Him.

Jesus used this opportunity to remind the Jews of something they should have known. “Nothing that enters one from outside can defile that person, but the things that come from within are what defile.” The Law of Moses always aimed at the heart and the behavior that issued from it. Jesus made that clear in the Sermon on the Mount. All their laws of ritual purification (dietary, contact with blood, etc.) were meant to teach them the difference between holiness and worldliness. They needed to be willing to separate themselves from the world so they could be witnesses to the world (a “kingdom of priests”) of a new kind of life. Keeping the external laws of purification did not excuse them from obedience of the heart. Whenever the religion of the Jews lapsed into keeping only the external ritual and ceremonial laws, their worship became “vain.”

Were these Pharisees guilty of that? It seems so. Their fault-finding and preoccupation with their own sectarian doctrines about ritual washing lifted the veil on hearts that Jesus perceived to be empty of true love of God. Nothing in the Gospels irritated Him more than people going through the empty motions of religion.

Possible response: Lord Jesus, I always want to think I don’t go through “empty motions of religion,” but I need to know I am susceptible to it. Please show me whenever it happens.

We can understand some of what provoked Jesus to anger in the Gospel when we read these words of Moses. He was speaking to the people of Israel after their long sojourn in the wilderness as they made their way to the Promised Land. He warned them not to “add to what I command you nor subtract from it.” In Jesus’ day, that is what the Pharisees had done. God gave the Law to His people to enable them to be witnesses “to the nations” of how near He is to His people and how wise and just His ways are. God’s law enabled those who carefully observed it to practice love of God and love of neighbor, the true path to happiness. The Ten Commandments still serve as our guide to this good life. No tinkering is necessary!

Possible response: Heavenly Father, thank You for the goodness of your Law. Help me to always embrace it in both its letter and its spirit.

Our psalm gives more elaboration on the completeness of God’s Law to lead to happiness for the one who lives it from the heart. See that keeping the law is not simply a matter of external ritual purity. It involves “walking,” “doing,” and “thinking.” The one who observes the Law keeps his tongue in check, doesn’t harm his neighbor, and loves God’s covenant people. He is generous and honest in his dealings with money. The psalmist tells us “whoever does these things shall never be disturbed.” Our responsorial refrain explains why that is true: “The one who does justice will live in the presence of the Lord.”

St. James assures us that God doesn’t change—what He gave to His people through Moses as a wise, just Law still works that way. The difference between then and now is that, because God “willed to give us birth by the Word of truth that we may be a kind of firstfruits of His creatures,” we are now able to keep the Law in the strength and grace of our Lord Jesus Christ. He is the Word Who “has been planted in [us] and is able to save [our] souls.” The emphasis, of course, remains on being doers of the word, “not hearers only,” so that we don’t delude ourselves. Self-delusion was what had overtaken the Pharisees. St. James tells us that “religion that is pure and undefiled before God” is that which cares for the needy (“orphans and widows”) and seeks to live the virtues of heaven, not the vices so available from “the world,” the way of life that excludes God for the sake of self. It is a matter of keeping our hearts clean, washed in our baptismal grace, rather than worrying about hands, cups, jugs, kettles, or beds.

Possible response: Lord Jesus, help me look for ways today that I can practice “religion that is pure and undefiled before God.”

One thought on “Twenty-second Sunday in Ordinary Time, Year B—August 30, 2015”