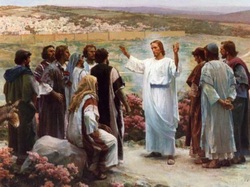 Today, after repeatedly insisting that His disciples must eat His flesh and drink His blood, Jesus asks, “Does this shock you?” Well, yes.

In the Bread of Life discourse, Jesus has been speaking to a mixed crowd. There were “the Jews” who had tracked Him down after the feeding of the five thousand. There were also His “disciples,” people who had already started to follow Him. Among these, of course, were the Twelve. It was common for rabbis in Judah to attract disciples; recall that John the Baptist also had disciples. These were men eager to learn and very probably spiritually hungry. At this particular time in the history of Judah, Messianic expectations were very high. Because of His remarkable and very public miracles, it is not surprising that Jesus had many “disciples.” What is surprising is how hard He made it for them to follow Him.

Our Gospel begins with a question from “many” of Jesus’ disciples: “This is a hard saying; who can accept it?” They are referring to His statements about eating the “true food” of His flesh and drinking the “true drink” of His blood in order to have eternal life. His refusal to explain more fully what on earth He was talking about pushes them to the limit. They call it a “hard saying,” which is a muted way of describing how outrageous it was. They just couldn’t swallow it (pun intended).

Jesus, aware of the “murmuring” about this among the disciples, has a question for them, too: “Does this shock you?” By asking this question, Jesus does not retreat at all from the truly alarming nature of His words to them. It is worth pausing here to note that if Jesus had been speaking metaphorically to them, suggesting that the eating and drinking were to become occasions of remembering Him and trusting in Him, there would not be any “shock” element in what He has told them. The Bread of Life discourse can only shock the disciples if they assume He is speaking literally. It helps to know that the Greek verb St. John uses here (trogo, see Jn 6:54) is one that means “chew” or “gnaw.” It is used four times in the second half of John 6, only once in the rest of the New Testament. This particular verb is used in Greek literature to describe the feeding of animals and cattle, and in some cases for human eating. Earlier in the discourse, St. John uses the more common verb for eating, esthio. The change in vocabulary marks a shift in focus, an intensification of literal eating. No wonder “many” of the disciples were shocked.

Rather than retreat or explain, Jesus responds with another enigmatic question: “What if you were to see the Son of Man ascending to where He was before?” It’s getting worse! Jesus is now claiming to be the heavenly figure described by the prophet, Daniel (see Dn 7:1-28), whose ascension to His throne in heaven will be visible to human eyes. If His disciples were bothered by His strange insistence on a meal of His flesh and blood, they would surely be undone by this new suggestion. Why? Jesus tells them: “It is the Spirit that gives life, while the flesh is of no avail. The words I have spoken to you are Spirit and life.” The reason they are struggling is because they are relying on reason alone to figure Jesus out. Apparently, their discipleship arose from their belief in Jesus as a strictly human rabbi. He now presents them with a challenge. Are they willing to follow Him without putting rational limits on Him? Can they accept what He says, as strange and impossible as it sounds, because of Who He is?

Jesus knows where this is going; He “knew from the beginning the ones who would not believe.” It was just as He had warned everyone much earlier in this discourse: “No one can come to Me unless it is granted by My Father.” Human, rational assessment will fall short in the decision to follow Jesus. The moment will inevitably arrive when only God’s help can move the disciple from the natural to the supernatural, from doubt to faith.

“Many of His disciples” did not make it through this moment. They “returned to their former way of life and no longer accompanied Him.” They were not willing to follow this kind of rabbi, making these wild statements. The next question Jesus asks, in light of all this, was reasonable: “Jesus then said to the Twelve, ‘Do you also want to leave?’” Don’t we wish we could see the expressions on their faces when He turned to them with this painfully penetrating question? Were they staring at the ground, afraid to make eye contact? Were there small nervous coughs and throat-clearings, as they waited to see how each other would answer? Finally, Peter speaks up: “Master, to whom shall we go?” Without minimizing the difficulty of Jesus’ statements, Peter tells Him they are willing to stay because they are convinced He is “the Holy One of God.” They are willing to suspend judgment on whatever Jesus says, no matter how preposterous it sounds, because they believe He is Divine. They trust Him.

As it later turned out, Jesus completely fulfilled the “shocking” statements that turned many of the disciples away. At the Last Supper, He transformed bread and wine into His Body and Blood; the disciples consumed Him that way. At the Ascension, they watched as He returned to His throne in heaven, just as He foretold. Their eyes of faith gave them the vision they needed to see this fulfillment. The Bread of Life discourse teaches us not to turn away from the impossible promises Jesus has made. If He said it, He means it. The Church always plants us in the response Peter made to Jesus: “You have the words of eternal life.” Amen.

Possible response: Lord Jesus, I want to trust Your promises, no matter how impossible they sound. Please strengthen me to do that in Your Eucharistic grace.

In this Old Testament reading is a moment of decision similar to the one we saw in our Gospel. Joshua, the great leader of Israel who followed Moses, is addressing the people after all their battles to regain the Promised Land. It was time for them to renew their covenant with the Lord. He put their choices clearly before them: they could worship the gods their fathers had known in the pagan lands where they lived before coming to the Promised Land, or they could worship the pagan gods of the people they had conquered, or they could “serve the Lord, “ as Joshua and his household would.

The people acknowledge that God had more than proved His love and care for them. On the strength of what God has already demonstrated, they are willing to serve Him, “for He is our God.” The response that Peter gave to Jesus when asked about whom the Twelve would follow has an echo of this kind of faith. Just as Israel was convinced that God was with them, so too were the Twelve convinced that Jesus was God’s “Holy One.” The Israelites cried out: “Far be it from us to forsake the Lord.” Peter, speaking for the Twelve, said, “Master, to whom shall we go?”

When the Lord presents us with moments of decision, what will be our choice?

Possible response: Heavenly Father, sometimes my circumstances make me think I have no choices. Help me see I can always choose You.

We continue to sing from Ps 34 in our responsorial, as we have done all this month. The refrain has been a steady invitation to “taste and see the goodness of the Lord.” The psalmist reminds us of God’s deliverance in times of distress, His ultimate victory over all evil, and His tenderness to those who are “brokenhearted” and “crushed in spirit.” This reading ends with a Messianic foretelling of “the just one,” Who will know God’s full deliverance without a single bone being broken. Jesus on the Cross is that “just one.” Why does the psalmist suggest that no harm will come to Him, even though we know the agony of Christ’s Passion? He prophesies this way because of the Resurrection. Pain and suffering didn’t have the final word. Jesus rose victorious, unscathed by His bruising battle with sin and death. It is this glorious Body that Jesus offers to us in the bread and wine of the Eucharist. Truly this meal gives us the same eternal life that raised Him from death. “Not one” of our bones will be broken, either.

Why does the Church give us this reading as we conclude the Bread of Life discourse? St. Paul is writing about marriage and its sacramental reality. He makes a special point to emphasize the “one flesh” nature of marriage. This was God’s original design for marriage, as noted in the quote from Genesis. This physical, emotional, and spiritual union of man and wife was always intended to represent God’s own relationship with His people, fulfilled in Jesus. St. Paul describes marital union in a unique way: “Husbands should love their wives as their own bodies. He who loves his wife loves himself. For no one hates his own flesh but rather nourishes and cherishes it, even as Christ does the Church, because we are members of His body.” This is an astounding unity! When we understand it, we begin to see why Jesus left us a miraculous meal that enables us to take Him into our own bodies to nourish and cherish us.

He is our Bridegroom, ever inviting us to the marriage feast. He loves our bodies as His very own.

Possible response: Lord Jesus, the Eucharist is Your nuptial pledge to us, to me. I know I am not worthy; I know You are healing me for eternal life, a promise You have made. Thank You.

One thought on “Twenty-first Sunday in Ordinary Time, Year B—August 23, 2015”