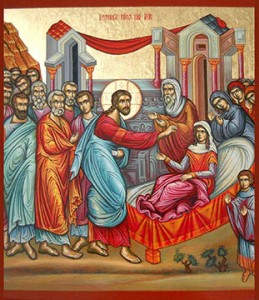 In today’s Gospel, Jesus gives life to the living dead and to the literally dead. What is common to both healings?

St. Mark gives us a story within a story in this account of Jesus and two people for whom He worked miracles of healing. The story begins with a desperate father, Jairus. His daughter was gravely ill, to the point of death. Casting all propriety aside (he was, after all, a “synagogue official”), he fell at Jesus’ feet and “pleaded earnestly with Him.” Jairus was confident that if Jesus would only lay His hands on the child, she would “get well and live.” Jesus, along with a large crowd of onlookers, “went off with him.”

Then begins another story. In that large and pressing crowd was a woman “afflicted with hemorrhages for twelve years.” She had wasted all her money on doctors who could not cure her. In fact, she “only grew worse.” Her condition also meant that she was ritually unclean (see Lev 15:25-30). This would exclude her from full participation in the covenant life of Israel. Knowing this, we understand why she resolved to quietly touch the hem of Jesus’ garment in her hope to be healed. She feared ritually contaminating Him, so she did not touch His skin. She likely never dreamed of asking Him to touch her. This woman—sick and getting sicker, impoverished, and living as an outsider among her own people—was as good as dead, even though she was alive. Imagine her hollow, empty existence. It must have been a daily struggle for her not to give up hope. Was she already at that point when “she heard about Jesus”? At this time in His public ministry, Jesus was drawing great crowds. Something in what the woman heard in the buzz about Him made her seek Him out. When Jairus approached and fell as Jesus’ feet, she must have been close enough to hear their exchange and see the compassion that set Jesus on His way to the dying child without delay. In spite of all the years of sickness, all the dashed hopes, and the general impossibility of the situation, this woman had faith. She believed that Jesus was the answer to her problem.   She trusted that He could restore life to the shell of existence she lived. She acted on her faith; just touching His cloak healed her.

To her great shock, Jesus knew immediately “that power had gone out from Him.” The woman thought she could be a nameless face in the crowd, an anonymous recipient of some life force that emanated from Jesus. Not at all! He wanted to meet the person who had such faith in Him. He wanted the crowd to know her, too. So, ignoring the ridicule of the apostles (“You see how the crowd is pressing upon You, and yet You ask, ‘Who touched me?’”), Jesus sought her out. She was terrified, fearing that her willingness to break the ritual law against contact with a woman like her would now be exposed. Nevertheless, instead of bolting from the scene, “she fell down before Jesus and told Him the whole truth.” The confession did not lead to condemnation. On the contrary, Jesus restored her, cured, to the covenant community. Calling her “daughter,” a term that referred to her covenant status as God’s beloved child, Jesus announced before everyone that her faith had now made her clean and given her the peace she surely had not known for twelve long years. Although physically not dead, this woman received true life from Jesus. She is an icon of all of us who, for whatever reason and for whatever length of time (twelve years or twelve hours), feel that we are the living dead. Our only hope is Jesus. To reach out and grasp at Him—a glance toward heaven, a loving touch of a crucifix, a request of prayer from a friend, the recitation of a Scripture verse—puts us in the same place of faith as this frightened woman. She teaches us that our best response to a deadening numbness that can overtake us is to fall down before Jesus (as Jairus did, too) and tell Him the whole truth. At that instant, our lives can be restored to us. Jesus wills it.

So, what about Jairus during all this hubbub? Can we imagine his impatience and growing anxiety in this delay? Then word comes that his greatest fear has come to pass: “Your daughter has died.” How this father’s heart must have shriveled upon hearing these dread words. Jesus immediately addresses the father’s temptation: “Do not be afraid; just have faith.” The woman with a flow of blood feared what Jesus would do (expose her to the crowd); the father feared what Jesus wouldn’t do (heal his daughter). Jesus got to the bottom of their fears: have faith.

When they arrived at Jairus’ house, Jesus announced that the “commotion and weeping” over the child’s death was inappropriate: “The child is not dead but asleep.” Again He had to endure ridicule—this time from the crowd, not the apostles. Ignoring it again, He went in to the child and took her hand. Earlier the woman had broken the ritual law against contact with her; now Jesus breaks it by touching the dead. Then, He commanded her to “arise” (a term so suggestive of resurrection). The twelve years of exuberant child-life were restored to her (as the twelve years of lost life were restored to the woman). This left the crowd “utterly astounded.”

We can’t miss the meaning of these two intertwined stories. Whether it our own life that is ebbing away, for whatever reason, or the life of someone we love, our only hope is faith in Jesus. He came to give us life: “I have come that they might have life, and have it abundantly” (Jn 10:10). “Abundant” life, of course, means eternal life, a life that begins now, by faith in Jesus; it is life that not even death can destroy.

What can these stories teach us today about that life?

Possible response: Lord Jesus, please help me meet the fears that will taunt me today with the faith that can conquer it.

“God did not make death.” The Book of Wisdom reminds us that God designed us for life—real life. “For God formed man to be imperishable; the image of His own nature He made him.” No wonder Jesus performed so many life-giving miracles! God does not want us to be either the living dead or the eternally dead. We need this bracing straight talk from time to time, don’t we? We allow our circumstances—our real pain and suffering—to frighten us into thinking that God somehow “rejoice[s] in the destruction of the living,” when this Scripture clearly tells us that He does not. How foolish! In the Gospel, Jesus demonstrates that He is on our side. He is for us. It is only the devil’s envy that whispers death into our hearts. It is only when we join the devil’s “company” that we “experience it,” too.

What can Wisdom teach us today?

Possible response: Heavenly Father, thank You for designing us to be imperishable. Forgive me for the times I have suspected You are against me.

The psalmist rejoices in God’s good gift of life: “O Lord, You brought me up from the netherworld; You preserved me from among those going down into the pit.” He knows that in life there is often real suffering and sorrow, but these are only temporary: “At nightfall, weeping enters in, but with the dawn, rejoicing.” It is joy, not grief, which is eternal. When the psalmist writes, “You changed my mourning into dancing,” he sounds like Jesus in the Beatitudes: “Blessed are those who mourn, for they shall be comforted.” Through His work on the Cross for us, we know that suffering can never have the last word over our lives. Therefore, we can confidently sing, “I will praise You, Lord, for You have rescued me.”

To understand this reading, we must know its context. St. Paul here is writing to the troubled Corinthian church. It was a community born as a result of his preaching, but, although the various members had many charismatic gifts, they were bogged down in controversies, divisions, and even immorality. Their spiritual growth in virtuous love had been stunted. These problems were occasions for St. Paul’s several epistles to them.

In our passage today, St. Paul writes about an earlier intention they had formed to make a material donation to the impoverished church in Jerusalem (where there had been a famine) but had not yet done. The Corinthians could actually afford to follow through on their intention. St. Paul seeks to motivate them by reminding them that Jesus, “though He was rich, for your sake He became poor, so that by His poverty you might become rich.” Jesus left the glory of Heaven that was His, making Himself humble and small in His humanity, for our sakes. He returned to that glory, of course, but He took us along with Him. St. Paul hopes the generosity of Jesus in spiritual things will be an example to the Corinthians to be generous in material things as well.

How does this passage relate to our other readings? St. Paul uses the example of Jesus’ selfless love for others to spur the Corinthians on to love as He did. In our Gospel, Jesus is an example of how God’s love is for us, not against us. Even in the midst of some ridicule, Jesus offered life and healing to those in desperate need of it. Can His example help us to do likewise? Can our faith in Him help make up what is lacking in the faith of others? Can we make a deposit of trust in God’s love in the bank accounts of those whose faith is fragile or impoverished? Perhaps our “abundance at the present time should supply their needs.”

Possible response: Lord Jesus, I know You desire me to follow Your example of generosity, both spiritually and materially. Help me watch for opportunities to live that way today.