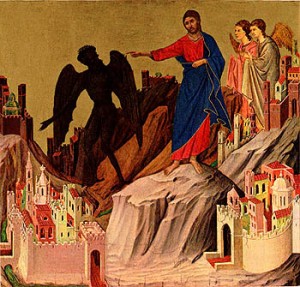 Today, we hear Jesus announce the familiar call of the Church during Lent: “Repent, and believe in the Gospel.”

In one of the lectionary’s shortest Gospel readings, St. Mark describes the beginning of Jesus’ public ministry. Right after His baptism by John in the Jordan, “the Spirit drove Jesus out into the desert, and He remained in the desert for forty days, tempted by Satan.” St. Mark, unlike the other evangelists, doesn’t give us details of the temptation. His focus is on the forty days and on Jesus’ contact with both fallen and ministering angels. Why is it important to know that this was a forty-day event?

To the Jews, the number forty had a long association with times of testing and probation for God’s people. In the days of Noah, when “the LORD saw that the wickedness of man was great in the earth, and that every imagination of the thoughts of his heart was only evil continually” (Gen. 6:5), He sent a rain that flooded the earth for forty days and nights. The Flood was a judgment on the rampant wickedness that had spread through the earth, but it was also a time of grace, in which God preserved life, both of humans and animals, through the righteousness of one man, Noah. Later, when God delivered His people from bondage in Egypt and made a covenant with them at Mt. Sinai, He tested them by keeping Moses in a fiery cloud on the top of the mountain for forty days and nights, leaving them without a visible leader (see Ex. 24:18). They failed that test, creating for themselves a golden calf, a god they could see. However, God had mercy on them, through Moses’ intervention, and He agreed to continue with them on their journey to the Promised Land. As penance for the sin of the people, Moses fasted forty days and nights on Mt. Sinai, as he waited for God to write His commandments on stone tablets for a second time (see Ex 24:28). When the Israelites finally arrived at the border of Canaan, they refused to go in to possess the land; they were not willing to trust God for the conquest. God gave them what they wanted, so the people wandered in the wilderness for forty years as the rebellious generation died off. It took that long to purify the nation of its hard-heartedness.

Even just this brief (and not complete) history of the number forty in the Old Testament helps us see that when St. Mark tells us simply that Jesus was in the desert for forty days, he was saying quite a lot. When he tells us further that Jesus was “tempted by Satan,” we understand that Jesus entered into what many others in the history of man had faced without success. Certainly the nation of Israel, God’s chosen people, had not been able to resist the Tempter’s call to disobedience and covenant unfaithfulness. Their long history proved that. For Jesus to follow the Spirit into the desert and face down Satan meant He was the true Israel, the righteous “first-born” of God, as Israel was frequently called in Scripture (see Ex 4:22). Jesus did for them what they could not do for themselves.

Notice that St. Mark also tells us, “He was among wild beasts, and the angels ministered to Him.” This description takes us all the way back to Adam in Eden, who named all the animals and lived among them. He was the first victim of Satan’s seduction. Adam’s original love of God, given to him at Creation, had to be tested in order for it to be truly his own. His probation ended in original sin; angels drove him out of Eden and blocked the way back in. So, Jesus in the desert for forty days, resisting Satan without capitulation, becomes the true Adam, doing for all mankind what we cannot do for ourselves. As a result, angels ministered to Him—a tender reversal of the Fall.

At His baptism, Jesus had publicly identified Himself as a man living in a fallen world, like all of us. His immediate battle with man’s great enemy, Satan, prepared Him to fight to the end, even to death on a Cross. That is why, when John the Baptist’s public ministry ended with imprisonment, Jesus was ready to announce, “This is the time of fulfillment. The kingdom of God is at hand. Repent, and believe the Gospel.”

Possible response: Lord Jesus, I am so thankful You are well-acquainted with temptation. Help me remember that about You.

In these verses, we find the words God spoke to Noah after the Flood ended, and Noah was once again on dry land. The great purification of the earth through water had taken place. There had been much death, of both men and beasts, but there had also been a kind of rebirth and renewal. In particular, we see how God desired to establish a covenant with Noah, his descendants, and “every living creature.” God promised never to repeat the Flood: “There shall not be another flood to devastate the earth.” As a sign of this promise, God set the rainbow in the sky. In this beautiful element appearing in nature, we can see the first outline of sacramental grace. God associates Himself and His love with a concrete, tangible reality. When men see it, God Himself will act, which is pure grace: “I will recall the covenant I have made between Me and you and all living beings.” We understand that a sacrament is also a guaranteed encounter with Jesus, in which His life flows into us, by means of water, oil, bread, wine, etc. Pure grace.

The great value of reading this passage on the first Sunday in Lent, which is our own forty days of purgation and purification, is that it vividly reminds us that times of testing and trial have a purpose, a goal. We can see God’s eagerness to establish Noah within the safety and provision of His covenant, once the Flood had ended. So it is with us. The journey through Lent leads us to the joy of Easter, to the victory of the New Covenant. We might wonder why God promised never to purge the earth with another flood. Didn’t great wickedness appear again on the earth, even in Noah’s own day? Did the Flood really work? It certainly worked to teach the world that wickedness must eventually be judged. However, it would take a different kind of “bath” to wash the human heart clean of sin. God would never need to send another Flood, because it had already served its purpose, pointing beyond itself to the waters that would definitively wash the earth clean—baptism, the water of new life.

Possible response: Heavenly Father, please help me keep the goal of covenant joy with You ahead of me in my Lenten journey this year.

This psalm is an excellent Lenten prayer, because it is a simple plea for God to teach and guide us, creating in us open hearts. When we think about the story of man, beginning with Adam and all through Israel’s history, we see it as a story of man’s struggle to obey God, to keep covenant with Him. Jesus came to heal us and make us able to obey. So, now, we can, in all sincerity, pray: “Your ways, O LORD, make known to me; teach me Your paths.” This can become our heart’s desire in Lent. In the simplicity of prayer, fasting, and almsgiving, we seek to cut away distractions and burdens that harden our hearts and make us dull to God’s love. The psalmist knows that God’s compassion and love “are from old.” He has ever been bending down to be kind and good to us. In Lent, we can confess with the psalmist: “Your ways, O Lord, are love and truth to those who keep Your covenant.”

This passage contains two verses that have baffled exegetes for centuries, and the debate about their meaning has not been definitively resolved. The danger for us is to bog down and miss the reading’s main message and its connections to the other readings. Let’s try to avoid that.

St. Peter tells us, “Christ suffered for sins once, the righteous for the unrighteous, that He might lead you to God.” This summarizes all of salvation history—all the failed testings and probations of all men, from Adam to now, have been overcome in Christ’s suffering and obedience on our behalf. Jesus’ death and Resurrection have powerfully accomplished God’s loving will for man.

The difficulty comes in vss. 19-20. We do not have the space to examine the many different interpretations that have appeared over the years in which Christians have read them. The most recent scholarship suggests that the verses describe Jesus’ descent into Hades, the abode of the dead. He went there to liberate those who had sought to live righteously and died before His appearance within history. The text says He “preached to the spirits in prison, who had once been disobedient while God patiently waited in the days of Noah.” These “spirits” are not the unrighteous (because there is no opportunity for repentance after death). Instead, according to Jewish tradition in Jesus’ day, they refer to fallen angels who tempted and tormented mankind in Noah’s day. It was thought that, being angels, the Flood could not destroy them, so they were shackled in Hades, awaiting their fate. When Jesus descended into Hades on Holy Saturday, “in addition to liberating the righteous dead of the Old Testament for entrance into Heaven, He also proclaimed (“preached”) Himself Conqueror of evil to the infernal spirits whose power had just been shattered by His redeeming death.” (Ignatius Catholic Study Bible, pg 456)

The real thrust of this passage, however, is to help us see that the Flood was a foreshadowing of baptism, by which we can have a “clear conscience” before God. The obedience of Jesus has won this for us. In Lent, we aim to enter more fully into this gift of life to us. Once, Jesus did battle with a fierce, hateful enemy. Now, He has “gone into heaven and is at the right hand of God, with angels, authorities, and powers subject to Him.”

King Jesus, lead Your Church through this Lent to the victory of Easter.

Possible response: Lord Jesus, please open my eyes during this Lent to the ways the Enemy subtly tries to shackle me to himself.