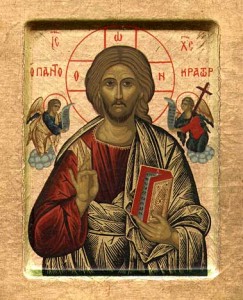 Right after Jesus’ baptism, He tangled with the devil. In St. Mark’s account of His first teaching mission, an unclean spirit confronts Him. Why this assault from the forces of darkness?

After Jesus assembled His disciples, He began His itinerant life of preaching the Kingdom of God.   Today, we read about His visit to the synagogue in Capernaum. The impact of His teaching was immediate: “The people were astonished at His teaching, for He taught them as one having authority and not as the scribes.” The people recognized that there was something unique in the way Jesus spoke about the Scriptures (which is what happened in synagogues). Surely the townspeople, at this early point, could not have much of an understanding of who Jesus was. However, there was one man in the crowd who did—“a man with an unclean spirit.” We might wonder why this man was in the synagogue at all. Was he a regular participant in this pious Sabbath observance, even though he was demon possessed? That seems unlikely. Had word gotten out that Jesus would be present? Even if the townspeople didn’t know much about Jesus, the unclean spirit clearly did: “What have You to do with us, Jesus of Nazareth? Have you come to destroy us? I know who you are—the Holy One of God!” How did the unclean spirit get this information? We have to assume Satan, who had already had a personal encounter with Jesus in the wilderness, spread the news throughout his minions—the other fallen angels whom we call “demons.” Many times throughout the Gospels, the demons know and fear Jesus. They are never permitted to speak about Him, just as we see here: “Quiet! Come out of him!” Why did this man, in the grip of a demon, make his way to the synagogue where Jesus was teaching? Why did he disrupt what must have been an exquisite experience of hearing Jesus speak?

When we see this early and persistent contact between Jesus and the fallen angels, we are reminded of God’s promises in the Garden of Eden. When His enemy, the serpent, tempted Adam and Eve to the disobedience that shattered the joy and harmony of all Creation, God pronounced a judgment on him immediately. “The woman” and “her seed” would someday do battle against him and defeat him (see Gen 3:15). When Jesus shows up in a synagogue in Capernaum and casts out an unclean spirit, we know that the battle has begun. Our enemy must be defeated if we are ever to live free of the fear of him. In Capernaum, Jesus showed Himself to be both an authoritative teacher and a man powerful enough to command obedience from demons. No wonder “His fame spread everywhere throughout the whole region of Galilee.” Israel—indeed, the whole world—had waited a long time for this One.

Possible response: Lord Jesus, help me live this day in the victory You won over my Enemy.

In this reading we learn that not only was Israel waiting for a Warrior to do battle with God’s enemy, she was also waiting for another prophet like Moses, and that is saying a lot! Moses was the leader God appointed to deliver His people out of bondage to an enemy who enslaved them. He spoke for God, performed miracles, fed the people supernatural food and drink, gave them God’s Law, and guided them to the brink of the Promised Land. Near the end of his life, Moses spoke these words to the people of Israel: “A prophet like me will the LORD, your God, raise up for you from among your kin; to him you shall listen.” This was a treasured promise throughout all the centuries of their history, right up to the appearance of Jesus. Moses had been the definitive voice of authority when the tribes of Abraham’s descendants formed a nation at Mt. Sinai. In fact, the people there preferred Moses’ voice to God’s. When God came down on the mountain to meet with His people, speaking to them with thunder, lightening, and earthquakes, they were terrified and said to Moses, “Let us not again hear the voice of the LORD, our God…lest we die.” God then promised to send another prophet like Moses to them, putting His words in the prophet’s mouth. Surely they would listen to a man speaking God’s own words! This helps us understand why Jesus so often made a point of saying that He spoke only what the Father wanted Him to say: “For I have given them [the apostles] the words which You gave Me, and they have received them and know in truth that I came from You” (Jn 17:8). Jesus wanted His kinsmen to know that God’s promised prophet had arrived. Mary, too, knew that her Son fulfilled this much-loved promise of a new Moses. At the wedding at Cana, she told the servants, “Do whatever He tells you,” just as Moses had once said about the prophet-to-come, “to him you shall listen.”

The people in Capernaum heard in Jesus that wonderful authority that had once belonged only to Moses. What they likely didn’t know was that a New Exodus was about to begin as well.

Possible response: Heavenly Father, thank You for sending us Your Son to speak to us in words we can understand and a voice that does not terrify us.

The psalm highlights for us the fact that hearing God’s voice should be met with two responses: joy and obedience. To know that God speaks to His people in Jesus, the Scriptures, the sacraments, the liturgies and magisterium of the Church—this should produce the joy of thanksgiving: “Let us joyfully sing psalms to Him.” However, men have always had the freedom to disregard God’s voice. The psalmist (like Moses) warns against this: “If today you hear His voice, harden not your hearts.” How long God has been speaking His love to His Creation, which began with His words, “Let there be light!” Now, He speaks to us in His Son, a Voice kept alive through the charism of the Church. How foolish we would be to cringe in fear from His words (like the unclean spirit did), or, worse, be indifferent to it. Instead, “let us bow down and worship…for He is our God, and we are the people He shepherds.”

If we wonder what these verses have to do with our other readings, we must remember their context. They come from a portion of St. Paul’s epistle in which he is answering questions about marriage from the Corinthian church. St. Paul anticipated a difficult time for Christian converts as the Greco-Roman world was evangelized. He was writing primarily to suggest that those not yet married would be better able to have undistracted devotion to the Lord if they remained unmarried. He speaks realistically about husbands and wives, by the very nature of marriage, having more “anxieties” than the unmarried. See that he gives this as prudential advice, “not to impose a restraint upon you … but for the sake of … adherence to the Lord without distraction.”

What lies at the heart of St. Paul’s instruction here? It is his conviction that Jesus, the One about whom Moses said, “to Him you shall listen,” the One about whom the psalmist said, “If today you hear His voice, harden not your hearts,” and the One about whom the people in Capernaum said, “What is this? A new teaching with authority”—this Jesus deserves our undivided attention. St. Paul is making a practical application of a Gospel truth. He is explaining how to best live something God said on another mountain, at the Transfiguration: “This is My Beloved Son, with whom I am well-pleased; listen to Him” (Mt 17:5).

Possible response: Lord Jesus, distractions clutter my every day. Grant me Your grace to listen to You instead of them.

One thought on “Fourth Sunday in Ordinary Time, Year B—February 1, 2015”