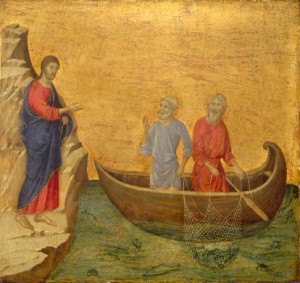 In Ordinary Time, we hear “the preaching of the kingdom of God” through all the lectionary readings. Today, we find a dramatization of what that means for some of us.

In last Sunday’s Gospel, we reflected on Jesus’ first meeting with Andrew, John, and Simon Peter. These men were very interested in the new Rabbi whom John the Baptist, their teacher, had called “the Lamb of God.” Today’s reading describes how they, along with John’s brother, James, moved from being interested in Jesus to becoming His intimate companions and co-workers. How did this happen?

We see that our episode takes place “after John had been arrested.” John’s public ministry had come to an end. His arrest, as well as the appearance of the One for whom John had prepared them, certainly must have deeply stirred his disciples. They had a lot to think about. They returned to their livelihood—fishing. Perhaps quiet times on the water gave them opportunities to mull over all that was happening. Into this setting steps Jesus, preaching in Galilee as the Baptist had once done at the Jordan River: “This is the time of fulfillment. The kingdom of God is at hand. Repent, and believe in the Gospel.” Such a startling message! Words like these could only mean one thing in Israel: the long wait for the Messiah had finally ended. Something new was about to begin.

Jesus passed by Simon and Andrew as they were casting their nets into the sea. He recognized them, of course, and called out over the water: “Come after Me, and I will make you fishers of men.” What a strange invitation to men who caught fish for a living. Why would fishermen want to catch men instead? We can assume that these dramatic words to the men in the boat, coming at a time when their heads must have been full of all the hope and expectation they had received as the Baptist’s disciples, were simply irresistible to them. The invitation answered a desire that was likely already forming in them. Recall that when Andrew first met Jesus, his immediate impulse was to go get his brother and bring him to “the Messiah.” Andrew already gave evidence of wanting to be a “fisher of men.” The Good News about Jesus was meant to be shared.

In response to the call of Jesus, Simon and Andrew “abandoned their nets and followed Him.” They instantly recognized their new vocation in this direct and personal invitation. John and his brother, James, likewise got this specific call to start a new life with Jesus, so they left their father and the other workers in answer to it.

We can’t miss the meaning here. These ordinary fishermen were not simply going to join the crowds that began to gather around Jesus, hearing Him preach and coming to believe in Him. Rather, theirs was a specific call to a specific vocation: to be apostolic “fishers of men.” They would no longer ply their trade in boats on the sea. They were the first of so many, both men and women, in all the centuries that have since passed, for whom the call to discipleship is a call to radical abandonment of all worldly occupations. For them, “to repent, and believe in the Gospel” means singular service, as priests and religious.

What about the rest of us?

Possible response: Lord Jesus, thank You for calling men and women to You in this remarkable way. May many today hear this call read at Mass as the fishermen heard it in their boats.

Jonah, a prophet of Israel in about 780 B.C., was called by God to preach a message of repentance to the very wicked Assyrian city of Nineveh. The people of Israel were terrified of the Assyrians, because they were ruthless and cruel in their victories over conquered peoples. They had a vicious policy of deporting anyone who survived their attacks, and because the Israelites knew their land to be a holy land, a gift from God, they hated the thought of ever being sent away from it. Jonah did not want to preach repentance to them; he didn’t think God should offer them that kind of mercy.

Nevertheless, three days in the belly of a fish convinced Jonah he couldn’t avoid the mission. He eventually went to Nineveh and announced, “Forty days more and Nineveh shall be destroyed.” What was the reaction to the reluctant prophet’s message? When the people heard it, “they believed God; they proclaimed a fast and all of them, great and small, put on sackcloth.” Here we have a picture that helps us begin to answer the question about what happens to those of us who hear God’s call to repentance and belief but do not get a particular call to drop everything for a new vocation, as did the apostles. The people of Nineveh took action to demonstrate their willingness to turn to a new way of life. God’s call to man, all through our history, requires a concrete response, a willful changing of our minds (“repentance” in Greek literally means “change of mind”) about Him and ourselves. Even when we are not asked to “abandon” our vocations, we are asked to make a radical turn away from ourselves and toward God. Surely the Ninevites continued their fishing, their trading, their pottery-making, their parenting. Yet, they were willing to make a clear break from their pride by fasting and wearing sackcloth. They recognized the darkness of their previous way of life and were ready to listen to God.

Happily, we have in our other readings more direction about how those of us not called to a religious vocation can live our lives as disciples of Jesus.

Possible response: Heavenly Father, help me be as resolute as the Ninevites when I hear Your call to repentance and belief.

The psalmist gives all of us, invited to a religious vocation or not, an excellent way to respond concretely to God’s call to repentance and belief. These verses form a heartfelt prayer for God’s guidance into the life He has for us: “Your ways, O LORD, make known to me; teach me Your paths…for You are God my Savior.” The first mark of repentance’s true humility is a willingness to be taught and directed by God. This is the difference between remorse over sin, which is largely emotional, and true repentance. The psalmist reminds us of something we saw in the story of Jonah. God desires to extend His forgiveness to sinners, even the worst of us: “Good and upright is the LORD; thus He shows sinners the way.”

Whenever we hear God’s call to repentance and belief (as both the Ninevites and apostles did), our first step is to pray, “Teach me Your ways, O LORD.”

How can these verses help us understand how to live our lives in this world, especially since St. Paul says, “For the world in its present form is passing away”? Well, there’s the key. Those of us not called to a religious vocation must understand what St. Paul is teaching us here. The context of these verses is quite important. In this part of his letter, St. Paul is answering questions sent to him from the Corinthian church. There had been some confusion about whether marrying was sinful or not. In vs. 26 (not included in today’s reading), St. Paul says, “in view of the impending distress it is well for a person to remain as he is.” He likely was expecting an outbreak of persecution against Christians from a hostile pagan city. In that case, starting a family would be imprudent. However, he goes on to say that marrying is not a sin. He also gives a universal maxim for how to live in the world, yet not be of it: hold lightly to everything. Our marriages, the events that cause tears or laughter, our possessions, our occupations—none of these are eternal. Some of us, answering God’s call to repentance and belief in the Gospel, will need to abandon these for Jesus’ sake. In doing so, the religious become for us a foreshadowing of heaven, where God is all to all. The rest of us will answer God’s call while remaining in our worldly lives, but we must live them in the light of what the others, called to religious vocations, teach us. We don’t abandon our vocations; we abandon our attachment to them, never allowing them to become ends in themselves. Even in our marriages, God comes first.

Possible response: Lord Jesus, please give me the grace to recognize my attachments and to loosen my grip on them.