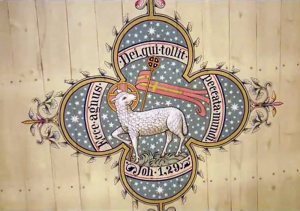 “What are you looking for?” Jesus asked this question of two men who had begun following Him. Did He already know the answer?

Today, St. John the Apostle, describing the beginning of Jesus’ public ministry, tells us that John the Baptist made a comment to two of his own disciples as Jesus walked by them: “Behold, the Lamb of God.” We are used to hearing Jesus spoken of in this way, but it would have been very odd in that day. Jews knew lambs as sacrificial animals. Occasionally, they thought of themselves metaphorically as God’s sheep (as in “The LORD is my shepherd,” Ps 23). However, for John the Baptist to speak of a particular man in this particular way—well, we can see what effect it had: “The two disciples heard what he said and followed Jesus.”

Jesus, aware of the men, “turned and saw them.” Notice that Jesus doesn’t ask, “Who are you?” The question He does ask goes much deeper than a request for their names: “What are you looking for?” These men had been disciples of the Baptist; they had responded to his call to repent in preparation for the coming of the Messiah. Recall how often, in our Advent lectionary readings, we heard John explain that Someone was coming. The people of Judah who flocked to the Jordan, who desired a fresh start as God’s people, were on the alert. The Baptist assured them he was not the One they sought—he baptized with water, but Someone Else was coming to baptize them “with the Holy Spirit and with fire” (Mt 3:11).

We are not surprised, therefore, that when two of the Baptist’s disciples heard him say, about Jesus, “Behold, the Lamb of God,” they were eager to find out more. It is noteworthy that in response to Jesus’ question, they did not quiz Him about His own identity. They did not ask for a sign. “Rabbi…where are You staying?”   Something happened to them during this face-to-face encounter with the One whom John called the Lamb of God. The question they asked was not for a geographical address. In asking it, they revealed their desire to identify with this new Rabbi. They wanted to hear what He had to say, not as curiosity seekers but as His new disciples. Jesus gave them an invitation that would change their lives forever: “Come, and you will see.” In this, we are reminded of what happened to man’s eyesight in Eden. The serpent suggested to Adam and Eve that through disobedience, their eyes would be “opened.” In reality, of course, they were struck blind to the truth about God and themselves. How remarkable that when Jesus began His public ministry, He said, “you will see.”

It didn’t take long for these two men to realize that Jesus was the Someone for whom they had been preparing. The very next day, Andrew, one of the two (tradition tells us the other one was St. John, the author of this Gospel) searched out his brother, Simon, and must have astonished him by saying, “We have found the Messiah.” It is quite probable that Simon had also responded to the Baptist’s preaching. Perhaps that explains his willingness to go with his brother to meet Jesus. When Simon approaches, Jesus seems to know him already! “Jesus looked at him and said, ‘You are Simon, the son of John; you will be called Cephas’—which is translated Peter.” What was in that look? Was it the same kind of look that, years later, reduced Peter to tears after he betrayed Jesus (read Lk 22:61)? How did Jesus know that Simon would become the Rock of His Church? What is going on here?

In St. John’s beautiful telling of Jesus’ encounter with His first disciples, we cannot miss one simple truth: God had already been calling these men to Himself before they decided to follow the new Rabbi. They were on a mission to find the Messiah, but this was, itself, a response to God’s call to them, His search for them, His loving knowledge of them. Jesus asked Andrew and John, “What are you looking for?” He knew the answer to this question before they did. Eventually, they, like us, would realize: Lord, we are all looking for You.

Possible response: Lord Jesus, I need to hear often the question You asked Your first disciples. I am prone to look for what I don’t need.

Our Old Testament reading gives us a wonderful example of how God calls us, even when we don’t realize it. Samuel was a miracle child born to his barren mother, Hannah, in answer to her anguished prayer (about 1000 B.C.). She, in turn, “lent” him to the LORD out of gratitude for the gift of his life (read 1 Sam 1:27-28). In this episode, he is only a youth, living with the priest, Eli, as his helper. While he was sound asleep (our most profound state of doing absolutely nothing!), the LORD called him, but since “at that time Samuel was not familiar with the LORD,” he assumed it was Eli calling him, a perfectly reasonable assumption. Eli eventually realized that it was the LORD calling Samuel, so he gave the boy a response should he again hear his name called. While Samuel slept, “the LORD came and revealed His presence, calling out as before, ‘Samuel, Samuel!’” This time, Samuel responds directly to Him, using words that would become his vocation as the last of the judges of Israel and the first in the office of prophet: “Speak, for Your servant is listening.”

God’s persistent call preceded Samuel’s pledge of service. So it was with the apostles; so it is with us.

Possible response: Heavenly Father, help me hear and listen when You call my name.

This psalm is an interesting combination of a man’s desire to obey God, and God’s work enabling him to do it. See how, in response to a cry for the LORD, the psalmist says “He put a new song into my mouth.” In addition, God, not desiring “sacrifice or offering,” gave him “ears open to obedience.” By a remarkable back-and-forth flow, the psalmist, in response to God’s work in him, is able to say, “Here am I, LORD; I come to do your will.” We saw this in Samuel, as well as in the apostles. Jesus was, of course, the definitive expression of this communion between God and man. The writer of Hebrews quotes this psalm to describe the obedience of Jesus to His Father’s will, “and by that will we have been sanctified through the offering of the body of Jesus Christ once for all” (Heb. 10:5-10).

Because of what Jesus has done in response to His Father’s initiative, we can now say with the psalmist, “to do Your will, O my God, is my delight, and Your law is within my heart.”

In this epistle reading, St. Paul gives us the reason why we must understand that God’s call and search for us precede our search Him. We are not initiating communion but only responding to His initiative. Why is that? St. Paul tells us: “you are not your own… you have been purchased at a price.” We are not autonomous creatures who may or may not begin a search for God! We are made in His image and likeness, and God has redeemed us, body and soul, at a very high cost. He is always calling us—and why wouldn’t He? As St. Paul said once, when he preached in Athens, “in Him we live and move and have our being” (read Acts 17:28).

In other words, God is always inviting us to “come” and “to see,” to listen for His call, and to understand that our bodies are “for the Lord, and the Lord is for the body.” What are we to make of this glorious truth? St. Paul tells us: “Therefore, glorify God in your body.”

Possible response: Heavenly Father, how little I understand that I am not my own! Please help me learn and live this more deeply.