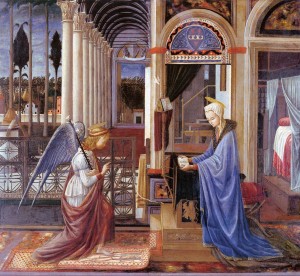 On this last Sunday in Advent, an angel startles a young woman in Nazareth. What was old, and what was new in his message to her?

How many times have we heard this Scripture read? If it is very familiar to us, we should make the effort to hear it now with fresh ears. Perhaps we can do that by trying to imagine what it was like for Mary to have this conversation with Gabriel as it happened in history.

First, we need a word about Mary. Pope Benedict XVI once described her as a woman deeply imbued with the Word of God in Holy Scripture. Reflecting on her Magnificat, he wrote: “Here we see how completely at home Mary is with the Word of God, with what ease she moves in and out of it. She speaks and thinks with the Word of God; the Word of God becomes her word, and her word issues from the Word of God” (Deus Caritas Est, 41). It is good for us to think about what the Pope says here about Mary. She knew the Old Testament inside and out! To understand her reaction to the visit from Gabriel, we will need to understand how many Scriptural promises are being fulfilled in this one humble scene in Nazareth. None of this would have been lost on Mary, but if we don’t know our Old Testament, it might be lost on us. To avoid that, consider these points:

(2) Gabriel greets Mary in an unusual way: “Hail, full of grace!” The last woman on earth to be “full of grace” was Eve, “the mother of all living” (read Gen 3:20). No wonder Mary was “greatly troubled…and pondered what sort of greeting this might be”! When Adam and Eve disobeyed God, the supernatural grace they received when God created them died. From that moment on, mankind’s only hope would be the appearance of “the woman” and “her seed” (read Gen 3:15) through whom God promised to defeat His enemy, the serpent. Mary knew, from Scripture, that a grace-filled woman and son would make all the difference in human history. She hears from Gabriel that she is that woman.

(3) Gabriel tells Mary that she is to have a son who “will be called Son of the Most High and the LORD God will give him the throne of David his father…and of his kingdom there will be no end.” Mary would have recognized this as an almost word-for-word fulfillment of the covenant promises God made to David, king of Israel, about nine centuries earlier (more on this as we reflect on our First Reading). It had taken a long time, but Gabriel’s message assures Mary that God was now keeping those promises.

(4) Mary is puzzled about the “how” of this event, as described by Gabriel. If she had simply been a young woman betrothed to a man of David’s lineage (as Joseph was), there is nothing to stump her here. However, it appears that Mary had vowed her virginity to God and did not intend to have conjugal relations with Joseph. Early in the history of Christianity, it was suggested that Mary had indeed vowed herself to God at a young age, probably planning to devote herself to prayer at the Temple, like the prophetess Anna in the New Testament (read Lk 2:36-38). She would have needed a protector to care for her needs but who was also willing to honor her vow of virginity. Joseph was that man. If this was the scenario into which Gabriel appeared, Mary’s question makes perfect sense. It also suggests that up to this moment, Mary had a plan for how she would live out her deep and unusual life with God. With the angel’s announcement, that plan was turned inside out (the list of Old Testament characters for whom this was also true is too long to mention here). Hers was to be a physically fruitful virginity.

5) Gabriel explains to Mary that the power of the Most High will “overshadow” her, and she would conceive a Child who would be the holy Son of God. “Overshadow” is exactly the word used in the Greek version of Ex 40:35 to describe how Yahweh “overshadowed” the Tabernacle, making it His dwelling in Israel. This language would surely have made Mary incredulous. A son would be conceived in her body by the Holy Spirit? God’s own Son? See that Gabriel reads her incredulity: “Nothing will be impossible for God.” Being a woman of Scripture, Mary would have been put in mind of Sarah and Hannah by these words, women of great faith in the Old Testament who also conceived children miraculously. Mary would have known by heart the words of an angel about Sarah’s “impossible” conception, nearly 2000 years earlier: “Is anything too hard for the LORD?” (read Gen 18:14)

(6) Look at Mary’s response: “May it be done to me according to your word.” Here she chooses to submit to God’s plan for her life with Him, letting go of her own. In doing so, she had to embrace the possibility of misunderstanding and even shame associated with seemingly breaking her vow of virginity. In Eden, Eve listened to the fallen angel’s lie about God, as he made her feel weak and duped if she believed God’s Word. Not wanting the shame that he suggested comes with dependency on God, she chose to disobey. Mary’s “yes” opened her to a world of complications! However, when she chose God’s way over her own, on the spot she became the new Eve—“the woman” whose “seed” would crush the head of the serpent, once for all.

Think about this amazing scene. How much it fulfills and foretells! Yet all of it reminds us of this one great fact: God keeps His promises. What good news to people like us, who are waiting in Advent to see the Lord, Who has promised to come to us and not leave us orphans. He will not disappoint.

Possible Response: Blessed Mother Mary, pray that I will trust that surrendering to the Father’s will is the whole point of my existence this day.

These verses describe the occasion upon which God made a covenant with David, King of Israel. David was “a man after God’s own heart,” as he is described in Scripture. When he took the throne (about 1010 B.C.), he wanted to build a “house,” or permanent resting place for the Ark of the Covenant. God had other plans, however. God wanted to build a “house,” or dynasty, for David. Remember that when the people of Israel begged for a king to rule over them, their desire actually represented a lack of faith. They already had a king—God Himself. The covenant He made with them on Mt. Sinai was to be their rule of life, and God agreed to be their protector and defender as long as they were faithful to that covenant.

The people, however, insisted on having a king like all the other nations around them. After one false start, with King Saul, God found in David a man who loved Him above everything. So, here God makes outrageous promises to David that would ultimately lead to Him dwelling in flesh and blood in the midst of His people. Israel would indeed have God as their king—in Jesus, a descendant of David. See that these words describing the king as God’s own Son and His rule as eternal are the ones Gabriel used in his message to Mary. This promise from God about the throne of David hung in Israel’s air for hundreds of years.

On a day in Nazareth, it finally reaches fulfillment.

Possible response: Heavenly Father, let me never forget Your great desire to live as King among Your people, the Church. You want to be with us as much as we want to be with You!

The psalmist here extols both the promises and faithfulness of God, because He is One whose “kindness is established forever” in the covenant He made with David. It is God Who will “confirm” and “establish” the throne of David “for all generations.” Jesus ascended to that throne at the Ascension. He rules in kindness now and forever. These words were written in anticipation of a king who would call God “My Father.” We now live in its reality, and, especially in Advent, we await its fulfillment. As we wait, let the words of the responsorial be our song of praise: “For ever I will sing the goodness of the LORD.”

These verses come toward the end of St. Paul’s epistle to the Romans, and they describe something vitally important for us as we wait for the fulfillment of God’s promises. See that St. Paul tells us that the Gospel of Jesus Christ is being proclaimed now “according to the revelation of the mystery kept secret for long ages but now manifested through the prophetic writings.” This means that God, from the beginning, always had a surprising plan for His Creation, but “for long ages” it was kept secret (like the “secret magic” of Narnia). God was pleased to reveal it very slowly, through the prophetic writings of Holy Scripture and their eventual fulfillment. God is not afraid of time. Even when millennia pass by, and no one can figure out what He is doing, God is at work moving everything forward to completion. What is the point of all this forward motion? St. Paul tells us that the Gospel is being preached “to all nations” in order to “bring about the obedience of faith.” God’s plan is for us to obey Him because we trust Him (just as it was for Adam and Eve). He knows that obedience that comes from faith is the true source of our own happiness.

So, today, when we ponder Mary’s act of obedience that comes from her faith in God, we know we are on the brink of great joy. When the Son promised to her here eventually enters another Garden (Gethsemane) and obeys His Father because of His faith, our joy will know no bounds.

For now, however, we must patiently wait. The Secret is about to be born!

Possible Response: Heavenly Father, I am not a patient person. Please teach me to wait for Your work with joy instead of anxiety or a blank mind.