Feast of the Dedication of the Lateran Basilica—November 9, 2014 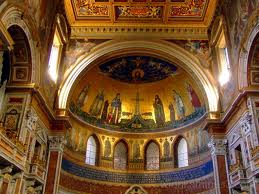 If we are pondering the question posed above, we will find that each of our readings offers a unique contribution to its answer. Once we have read them all, we will see the summary of their teachings stated most eloquently in the Catechism of the Catholic Church. May all of us be helped by this today.

St. John recounts for us an episode that is reported in all four of the Gospels. Usually, this is a big hint to us: pay attention, this is important. It was Passover in Jerusalem, and Jesus, being a good Jew, went up to the Temple there, as all adults were required to do in the Law of Moses. When He got there, He found two disturbing things that made Him incredibly angry.

First, animals meant for sacrifice were being sold to the worshippers in the Temple area known as the Court of the Gentiles. The Temple was constructed with this special place for Gentiles to pray and worship the God of Israel. Only circumcised Jews were allowed in the inner precincts of the Temple, but the Gentiles who were drawn to their God were welcomed into this Court. It was always the mission of the Jews to announce to the whole world the goodness and love of God. However, the sale of animals there made it impossible for anyone to pray. The whole purpose of the Court of the Gentiles was thoroughly corrupted.

Second, the moneychangers were charging exorbitant rates for the service they rendered. Worshippers at Passover came from all over the Greco-Roman empire, so they needed their currency changed into local coins so they could pay the Temple tax (another duty of all Jews). The high rates of the moneychangers amounted to extortion. No wonder that in St. Matthew’s Gospel, Jesus calls them “robbers” (see Mt 21:13).

In His most aggressive act recorded in Scripture, Jesus “drove them all out of the Temple area” with the admonition, “Stop making My Father’s house a market place.” Why was Jesus so angry? He was infuriated by how empty the religion of the Old Covenant had become. Commerce replaced worship. The door to the Gentiles had been effectively shut. He was full of righteous indignation on behalf of His Father’s Name and character. Later, His disciples would think back on this episode and see in Him what the psalmist described in Ps 69:9, the suffering of the righteous who are pained by the insults that sinners heap upon God: “For zeal for Thy house has consumed me, and the insults of those who insult Thee have fallen on me.”

The Jews watching all this fury must have been shocked. They asked, “What sign can You show us for doing this?” The answer He gave them surely baffled not only them but His apostles as well: “Destroy this Temple and in three days I will raise it up.” What an outrageous thing to say! The Jews tried to do the math: “This Temple has been under construction for forty-six years, and You will raise it up in three days?” Nobody could make any sense out of a statement like that. The apostles themselves would only understand it after the Resurrection. Then they realized that “He was speaking about the Temple of His Body.” His Resurrection made all the difference. St. John then gives us the key to understanding this episode: “When He was raised from the dead, His disciples remembered that he had said this, and they came to believe the Scripture and the word Jesus had spoken.” What does this mean?

After the Resurrection, the apostles understood that Jesus had come to establish a New Covenant, with a new way to worship God. When He drove the animals out of the Temple, He signified the end of animal sacrifice, because it was always meant to foreshadow the only sacrifice that can pay man’s debt of sin—a human, not animal, life. Jesus was the Lamb of God, Who takes away the sin of the world. In Him, all mankind, both Jews and Gentiles, have access to the Father to worship Him in spirit and in truth (see Jn 4:23). The Temple of the Old Covenant and its worship were never meant to be permanent. They were to prepare Israel and the whole world for the coming of the Savior. The building in Jerusalem would be surpassed by the Risen Body of God’s own Son.

Are buildings now insignificant? Why are we celebrating the dedication of a building today? We must press on in our readings.

Possible response: Lord Jesus, empty religion insults the Father. Keep me vigilant not to practice it myself.

Ezekiel was a prophet who had been among the first inhabitants of Jerusalem to be carried into exile by the Babylonians in the 6th century B.C. When he proclaimed his prophecies, the city and its Temple had not yet been destroyed. His difficult prophetic work was to announce to the Jews that their complete destruction was inevitable. God’s justice required that His people would lose everything because of their constant, intractable covenant infidelity. However, his message was also to be one of hope. When God’s judgment had been executed, His people would finally come to love and appreciate what they had lost. In exile, they would long to worship God as He deserved once again. The Lord, in His love, would make this possible. So, Ezekiel was given a vision of a new Temple, one that was dramatically different from the old one. This Temple would have life-giving water flowing from its foundation. The water would miraculously make salt water fresh, create an abundance of fish, and enable fruitful trees to grow, providing food and healing. What sort of Temple could this be?

Here is a vision of Jesus as the New Temple of God’s covenant people. The water flowing from this Temple is the life-giving water of baptism, the work accomplished by the Holy Spirit, Who heals sinners and enables them to bear the good fruit of virtue, God’s own life in them. Jesus spoke of this living water in St. John’s Gospel: “He who believes in Me, as the Scripture has said, ‘Out of his heart shall flow rivers of living water.’ Now, He said this about the Spirit, which those who believed in Him were to receive; for as yet the Spirit had not yet been given, because Jesus had not yet been glorified” (Jn 7:38-39).

So, now we see that the New Temple of Jesus’ Body is not just about His Body. The Holy Spirit, Who flows out from this Temple, changes the bodies of all who believe in Him. Are we ready to connect all this to an ancient building in Rome? Not yet.

Possible response: Heavenly Father, thank You for the gift of living water in my life, the Holy Spirit. Forgive me when I ignore Him, preferring thirst to Your refreshment.

This psalm celebrates a most remarkable phenomenon, “the astounding things [God] has wrought on earth.” What is the cause for such jubilation? It is the knowledge that “there is a stream whose runlets gladden the city of God.” The psalmist sees, prophetically, God dwelling in the midst of a city, a city made joyous by that living “stream” of water. His presence with His people in this way means that nothing shall ever disturb them: “We fear not, though the earth be shaken and mountains plunge into the depths of the sea.” So, where is this city, whose people cry out, “The waters of the river gladden the city of God, the holy dwelling of God Most High”? Where does God dwell with His people this way?

“Brothers and sisters: You are God’s building.” At last! St. Paul helps us make all the connections. He explains that Jesus is the foundation of God’s building (the New Temple promised in the Gospel) and that the Spirit of God dwells in us (the prophetic vision of Ezekiel), making us “the Temple of God.” God dwells on earth in His city, the Church (the joy celebrated in our psalm). Not only is Jesus God’s Temple, but by baptism into Him, so are we, both as individual believers and as members of His Mystical Body. All the intimations of Scripture—a new Temple where all mankind can worship in spirit and truth, where the Holy Spirit bears fruit and healing, where God dwells on earth—these are all now realized in Jesus and all who live in Him through the living waters of baptism, the Church.

Having gathered all the threads, we are now ready to read how the Catechism helps us understand today’s Feast. We are taking the time to remember the very first basilica dedicated in Rome (not in Jerusalem of the Jews but in Rome, the center of civilization at that time), now under the care of the Pope, successor to Peter whom Christ Himself appointed to care for His Church until He returns for us:

“In its earthly state the Church needs places where the community can gather together. Our visible churches, holy places, are images of the holy city, the heavenly Jerusalem, toward which we are making our way on pilgrimage. It is in these churches that the Church celebrates public worship to the glory of the Holy Trinity, hears the word of God and sings his praise, lifts up her prayer, and offers the sacrifice of Christ sacramentally present in the midst of the assembly.” (1198-1199)

Why wouldn’t we celebrate this day?

Possible response: “This is the day the Lord has made; let us be glad and rejoice in it.”

One thought on “Feast of the Dedication of the Lateran Basilica—November 9, 2014”