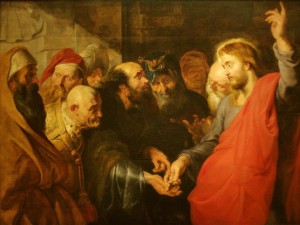 Jesus’ enemies try to set a trap for Him. A coin buys Him freedom from it.

For the last several weeks, our Gospel readings have shown us that Jesus used parables to help the religious elites of Jerusalem hear a call to believe in Him as their Messiah. They fell on deaf ears. We find today that “the Pharisees went off and plotted how they might entrap Jesus in speech.” They were unable to recognize themselves in the many stories Jesus told them. Instead, they sent “their disciples” to put a question to Him that they were sure would force Him into trouble. A measure of their “malice” is that “the Herodians” went with them. The Pharisees and Herodians were as different from and as opposed to each other as Republicans and Democrats are today. The Pharisees believed that the Jews needed to live as separately as possible from Gentiles in order to preserve their religious identity and power. The Herodians were Jews who believed that their nation was best served (and their own positions of influence best protected) by cooperating with their Roman governors. Theirs was a policy of assimilation, not separation. Why did the Pharisees want the Herodians to go along to the confrontation with Jesus, temporarily setting aside their radical differences? As much as they despised the Herodians, they were even more threatened by Jesus. They were ready to do anything to silence Him.

Reading through the extravagant and insincere flattery from this little entourage is uncomfortable, isn’t it? “Teacher, we know that You are a truthful man and that You teach the way of God in accordance with the truth.” They didn’t believe this, of course, but they wanted to sound respectful, perhaps out of fear of angering those gathered around Jesus who did believe it. Then they pop their trick question: “Is it lawful to pay the census tax to Caesar or not?” If Jesus said the tax should be paid, the Pharisees could have discredited Him in the eyes of the people, who resented Rome’s control. If He said it was unlawful, the Herodians would have been able to denounce Him to the Roman authorities.

Jesus saw through this sham: “Why are you testing Me, you hypocrites?” Why was Jesus so harsh with them? If their question had been an honest inquiry from people who truly cared about His opinion, surely His response would have been quite different. Wherever we see insincere religion in the Gospels, we see this anger in Jesus.

Then Jesus asks for a coin, and He turns the questioning back on His interrogators: “Whose image is this and whose inscription?” By His question, He requires them to identify the coin as Caesar’s. They could not possibly have imagined the trap would be sprung for them instead of Him! Once they identify the coin as belonging to Caesar, it was easy for Jesus to give them a reasonable, satisfying answer: “Then repay to Caesar what belongs to Caesar.” Where’s the controversy? Where’s the “gotcha” line? No one can question Caesar’s right to receive back what is actually his. Paying the government’s tax represents paying back what the government has, in fact, paid out in the way of services. It is a fair exchange and does not present a conflict for religious people.

However, Jesus then presses on, getting to the heart of what His questioners should actually be concerned about: “Repay…to God what belongs to God.” A coin stamped with its maker’s image clearly belongs to him; a human being, made in the image and likeness of God (see Gn 1:26), likewise belongs to God. The men who sought to trap Jesus out of malice, trying to hide it with insincere pious talk, had a much bigger debt to pay than their tax bills!

Possible response: Lord Jesus, I know You can see through insincere pious talk. Please keep my lips from speaking it.

Our reading from Isaiah helps us understand better why Jesus saw no inherent contradiction between the Roman government and the national life of God’s people, the Jews. Isaiah, writing in about the 6th century B.C., foretells of Cyrus, the LORD’s “anointed.” Cyrus was the Gentile king of Persia who conquered Babylon, where the Jews had been held captive for seventy years. As we can see from the prophecy, Cyrus was allowed by God to become king and ruler over Babylon “for the sake of Jacob, my servant, of Israel, My chosen one.” We see that Cyrus, although he did not know the LORD, nevertheless did the LORD’s work. He was the one who allowed the Jews to return to the Promised Land. He even helped to fund the re-building of their beloved Temple in Jerusalem. This prophecy reveals the reality that kept Jesus from falling into the Pharisees’ trap. God is much greater than all earthly powers. In fact, He can use them to do His bidding, even though they know Him not. St. Paul wrote about this in his letter to the Romans: “Let every person be subject to the governing authorities. For there is no authority except from God, and those that exist have been instituted by God” (Rom 13:1).

This truth explains why Jesus did not feel beholden to Pilate when He was being interrogated by him. When Jesus refused to answer Pilate’s question, he said to Him, “’You will not speak to me? Do You not know that I have power to release You, and power to crucify You?’ Jesus answered him, ‘You would have no power over Me unless it had been given you from above’” (Jn 19:10-11a). The rulers of this world exercise only delegated authority. Because Jesus knew this, the Pharisees’ trap was doomed to fail before it ever began.

Possible Response: Heavenly Father, help me remember that You are greater than any power on earth; none can thwart Your plan of love and goodness for us.

When Jesus told the Pharisees and Herodians to “repay…to God what belongs to God,” He was urging them to do what the psalmist does here: “Give the LORD glory and honor.” The psalmist proclaims God’s exalted place of honor and authority “among all the nations, among all the peoples.” Here, not only are nations and their rulers subservient to Him, but He makes “all the gods of the nations…things of nought.” There are kings who rule by God’s favor, but all should know that “The LORD is king; He governs the people with equity.” To embrace this truth is to protect ourselves from anxiety that can threaten us when we look around the world today and see the abuse of earthly power. Our rejoinder to that temporal fear is to sing with the psalmist: “Great is the LORD and highly to be praised; awesome is He, beyond all gods.”

When Jesus says in the Gospel, “repay…to God what belongs to God,” what is He asking of us? St. Paul answers this question in this epistle to the church of the Thessalonians. He had preached the Gospel of Jesus Christ there, and people had responded in their “work of faith and labor of love and endurance in hope.” Our works of faith, hope, and love are our repayment to God for all He has done for us. In a concrete way, this helps us to make the right response to Him, to give Him what He is due. Yes, we pay taxes to the government, but to God we give ourselves.

Possible response: Lord Jesus, please help me today to offer simple works of faith, hope, and love to the Father, to Whom these are surely due.

One thought on “Twenty-ninth Sunday in Ordinary Time, Year A–October 19, 2014”