Feast of the Exaltation of the Holy Cross, Year A—September 14, 2014 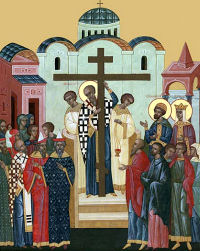 Today’s feast prompts us to marvel over how an instrument of shame, brutality, and defeat became the most glorious symbol in the cosmos.

Today, the Church calls us to celebrate the Exaltation of the Holy Cross. This means more than meditating on the meaning of the Cross for sinners like us, as fruitful as that would be. No, the idea today is to ponder the exaltation of the Cross, and there is a world of goodness for us as we answer this call.

St. John, in our Gospel, reports on the tail end of a conversation Jesus had with Nicodemus, a Pharisee (most of whom distrusted and opposed Jesus) and “ruler of the Jews.” It took place at night, probably because Nicodemus feared public association with the controversial Rabbi, although he was clearly quite impressed by what he had seen and heard from Him (read Jn 3:1-2). After startling Nicodemus with an explanation of the need to be “born anew” in order to see the kingdom of God, Jesus goes on to describe an event in His future that would be far more disturbing and unexpected than anything He has yet said.

We will understand this passage better if we examine our First Reading, because as He speaks to Nicodemus, Jesus draws on an Old Testament episode that would have been well known to him. We need to know it, too. Therefore, please read Num 21:4b-9 now.

As Moses traveled through the wilderness with the people of Israel, he had to listen to their constant complaining against God and himself. They accused him, and thus God, of bringing them out of Egypt only to destroy them in the desert. To punish them, God sent seraph serpents “which bit the people so that many of them died.” Think about this—God’s punishment on their complaining was often fatal. Doesn’t that seem extreme? They weren’t murdering, committing adultery, stealing, etc. They were only complaining. Why was the punishment so severe?

Recall in the Garden of Eden that God’s enemy appeared in the form of a serpent who made an insidious pitch to Adam and Eve. He suggested that they couldn’t really trust God, that He didn’t have their best interests at heart. It was that temptation to doubt God’s goodness that led to their tragic act of disobedience. When we understand this, we know how devilish this seemingly innocent complaining was. Although God had miraculously delivered them from horrific bondage in Egypt, they accused Him of wanting to kill them—a profound darkness.

Fortunately, the people realized their sin. Punishment is always supposed to lead to something better, to conversion. It is a lifeline to the sinner, calling him out of darkness and into God’s marvelous light. The people begged Moses to intercede for them, which he did. Do we wonder if the people expected God to simply heal their mortal wounds and get rid of the serpents? Isn’t that what we would want and expect? God’s remedy was radically different, however.

Moses had to make a bronze serpent, an image of the very creature that had killed so many, and mount it on a pole. Anyone bitten by a serpent had to look at the raised bronze serpent, an act requiring him to believe this was God’s outrageous remedy for the poison in his body that could kill him. If he looked at the exalted bronze serpent, “he lived.” What was God teaching His people through this strange event?

Their lessons were many. First, they learned not to doubt God’s goodness and love for them. That kind of doubt, as we know from Adam and Eve, strikes at the heart of the relationship God designed us to have with Him. When they looked at the serpent, surely it reminded them of the seriousness of their sin. Their complaining called forth God’s justice. It was a life and death matter. Then, they learned that the snakes were God’s creatures, even though they were full of deadly poison. The mounted serpent, although it looked like the enemy, was completely without poison, full of the gleaming metallic light of bronze. A wonderful transformation had occurred! The sting of death was now defeated by an act of faith in God’s ability to overcome the frightening power of the serpents. They were to look upon what had been feared and despised in order to receive new life into their bodies.

Perhaps now the conversation Jesus had with Nicodemus isn’t so mysterious. Our Lord tells him “so must the Son of Man be lifted up, so that everyone who believes in Him may have eternal life.” We have questions, of course. How is the lifting up of the Son of man like the lifting up of the bronze serpent? First, we know that we are like the people of Israel; we have been bitten by the deadly poison of our sin. We, too, must acknowledge this and cry out for God’s mercy. When we look at Christ dead on the Cross, or even just the instrument of His death, we get an indelible understanding of the gravity of our sin. It deserves death. Next, the remedy for our sin is not at all what we would expect. God asks us to gaze upon Christ crucified on the Cross—a Man who looks exactly like us but without the poison of sin in Him—and believe that seeing Him, in faith, heals our bodies from death into eternal life. Sin came into the world through a man, Adam (see Rom 5:12-14). We might think that looking at a helpless, beaten human being would be the last thing to save us from death, but a great transformation has occurred. The Man on the Cross, because He would also be “lifted up” out of death (the Resurrection) and “lifted up” to the right hand of God (the Ascension), has vanquished the Serpent and his poison of sin and death. God sent His Son into the world not to condemn but to save us. In the Cross, justice and mercy have met.

Every time we look upon the Cross now—over altars, on church steeples, in art and architecture, in our homes, on our bodies—we see the sign not of defeat but of the victory of life over death, health over sickness, joy over mourning. Most of us will remember that this Feast of the Exaltation of the Holy Cross fell just three days (yes, three days) after September 11, 2001. Recall how people packed Catholic churches that day (many not even Catholic) to be reminded that even the most vicious strikes of the Serpent have now, because of Jesus, lost their sting.

The psalmist gives us a haunting commentary on the contrast between God’s unfailing mercy and the faithless rebellion of His covenant people, Israel. Even though “they flattered Him with their mouths and lied to Him with their tongues,” God, “being merciful, forgave their sin and destroyed them not.” Over and over in Israel’s history we see a pattern in the people: “…their hearts were not steadfast toward Him, nor were they faithful to His covenant.” What explains His repeated willingness to turn “back His anger and let none of His wrath be roused”? St. John answered this in our Gospel: “For God so loved the world…”

How can God’s people repay this kind of love, we might ask. Our psalm response tells us: “Do not forget the works of the Lord!” Today’s feast helps u to remember, not forget, the mighty work of God in the Cross of Christ.

St. Paul now scoops us all of revelation, past and future, to describe why we are celebrating today’s feast. He tells us how Jesus emptied Himself and left heaven to become like one of us. He came to offer to God the perfect obedience that man never has nor ever could offer, apart from the mercy of the Incarnation. That obedience cost Christ Jesus everything, but through it “God greatly exalted Him and bestowed on Him the Name that is above every name.” Someday, all creation will confess that blessed Name, and when that happens, however it happens, the glory of God will finally be fully revealed in the triumphant Cross of Christ.

Possible response: “We adore You, O Christ, and we praise You, because by Your Holy Cross, You have redeemed the world.”

One thought on “Feast of the Exaltation of the Holy Cross, Year A—September 14, 2014”