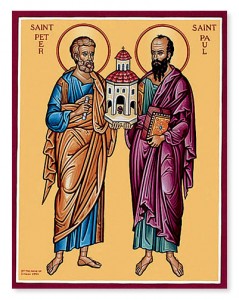 Today, the Church calls us to remember Sts Peter and Paul on this last Sunday before we return to the long season of Ordinary Time.   Why?

In an exchange that is very familiar to most of us, we read in our Gospel about Jesus asking questions of the apostles. Does it surprise us that He wanted to know, from them, what people thought about Him? Was it really the case that He didn’t know? Or did He perhaps have a deeper purpose in quizzing them? In answering, the apostles tell Him that people thought of Him as a very holy man, surely a prophet in the spirit of the great ones: John the Baptist, Elijah, Jeremiah. However, Jesus wants to know: “But who do you say that I am?” Here, the question is personal, as it should be. It is as if Jesus is saying, “Yes, I would expect outsiders to think of Me that way, but you have been with Me for quite awhile, you have heard and seen what they haven’t. Who do you say that I am?” As Erasmo Leiva-Merikakis writes in Fire of Mercy, Heart of the Word (Ignatius, pg 514), “Jesus’ question to the disciples is not so much an official examination at the end of a period of scholastic training as it is a hopeful query by a Lover who needs to know to what extent He is known, understood, and accepted in His deepest identity by those He loves, those to whom He has been at pains to manifest Himself.”

Simon Peter is the first to answer. “You are the Christ, the Son of the Living God.” Would all the other apostles have said the same answer if given the chance? We don’t know for sure, but we do know that when Simon makes this remarkable confession about Jesus, his life would never be the same. Jesus recognizes that God the Father has marked out Simon as the one upon whom Jesus will build His Church. Simon did not come up with this understanding through his own intelligence, piety, or radical devotion. The truth he uttered came as a revelation from God—a divine, infallible truth uttered through fallible human lips. Thus, it is a turning point in the future of the cosmos, because now Jesus, Who changes Simon’s name to Peter, Rock, has a solid human foundation upon which to establish His human/divine Church, His continuing Presence in the world He loved even unto death.

It is abundantly clear that Jesus is the One Who does the building; it is His Church. He is the One Who promises its power, even against death (“the gates of the netherworld”). He is the One Who holds the keys to His Kingdom and grants them to Peter, giving him authority to bind and loose (to forbid and to allow) in such a way that it represents heaven on earth. In other words, all the action is Christ’s, yet He chooses, together with the Father, to make His power visible in the human leadership of Peter. Would God choose one human being for such a role? Apparently! After the Incarnation, in which God took on flesh and blood, this plan to build a human/divine Church on earth is perhaps the most startling and unexpected thing God could possibly do. To give one man, Peter, “the keys of the kingdom” would be a terrifying idea if Jesus hadn’t been so clear in these verses that doing so would not—ever—put the trustworthiness of His Church in danger. The Church’s charism of truth and authority, although manifested in human beings, has its source in Heaven. As the Catechism teaches, “In order to preserve the Church in the purity of faith handed on by the apostles, Christ Who is the Truth willed to confer on her a share in His own infallibility” (CCC 889, emphasis added). Again, Leiva-Merikakis describes this well as he interprets Mt 16:18: “I am saying that you are Peter—Rock—and by declaring you to be such and giving you this new name, I am making you to be Rock, and upon the solidity provided by this choice and institution (and not so much by Peter’s personal faith) I will build My Church” (Fire of Mercy, Heart of the Word, pg 525; emphasis added).

The only question left to ask after the profound meaning of this passage settles into us is, “Did the early church actually work this way?” Our other readings help us think more about this. And because being Catholic means believing in the human/divine Church Jesus promised in our Gospel, we all have a stake in the answer to this question.

Possible response: Lord Jesus, thank You for not being as frightened of a human/divine Church as we sometimes are.

St. Luke tells us that Jewish opposition to the upstart Christian movement was immediate and severe: “King Herod laid hands upon some members of the church to harm them.” He had the apostle, James, killed; this got a favorable reaction from the Jews, so Herod “proceeded to arrest Peter also.” It is clear that Herod intended Peter to die, but he had to wait until after the Feast of Unleavened Bread. While Peter was in prison, “prayer by the Church was fervently being made to God on his behalf.”

An angel appeared in prison to deliver Peter, although it took him awhile to realize he wasn’t dreaming this episode. We might ask why St. Luke gives so many details about Peter’s escape from prison (and none about James’ execution). If we read this story in its context, however, we see that nearly the entire first half of the Book of Acts is devoted to showing up the importance of Peter’s role as leader of the infant Church. Episode after episode reveals the history of how Jesus’ commission to Peter in the Gospel was actually fulfilled. Even though all of the Twelve were granted apostolic authority, it was Peter who was their spokesman, their example, and, in the case of the Council of Jerusalem (see Acts 15), the final arbiter of dogmatic belief.

So, Jesus meant every word He spoke to Peter in our Gospel—every single word.

Possible response: Lord Jesus, Your promise to Peter is what gives life and longevity to Your Church. What a gift!

Our psalm reminds us that the angel’s deliverance of Peter from great danger in our First Reading is a mercy God extends to all those who fear Him: “When the poor one called out, the Lord heard, and from all his distress He saved him.” God has long delivered those who trust in Him in trying, difficult, scary times. We have every confidence to sing today: “The angel of the Lord will rescue those who fear Him.”

In our First Reading, we noted that the first half of the Book of Acts is largely about Peter. We might ask, “What about the rest of it?” The answer: It is almost entirely about St. Paul, the Church’s first great missionary. St. Paul was a convert to Jesus; he was an apostle, but he was not one of the Twelve. In a sense, he represents all those who are baptized and grafted into Jesus Body, the Church. We all have a vocation to live and spread the Gospel. We will not all have St. Paul’s specific calling to evangelize as a missionary, but we all do participate in the growth of the human/divine Church Jesus is building on earth. This is the reason why a Solemnity for Sts Peter and Paul is so fitting for us today as we turn into the season of Ordinary Time, the season for extending the Gospel by all our lives, in words and actions.

St. Paul’s great missionary accomplishments also help us understand that the apostolic authority Jesus granted to the Twelve was not going to remain only with them. They passed it on to people like St. Paul. Of course, his conversion came as a result of a unique direct revelation from Jesus, not through apostolic preaching, however he had to be baptized and commissioned through the laying on of hands in order to fulfill his special calling (see Acts 9:17-19).

Here we also see St. Paul writing at the very end of his life, shortly before his martyrdom in Rome. Look at how he describes his impending death: “I, Paul, am already being poured out like a libation.” A libation was the term used to describe the cultic liturgy of Israel, where daily drink offerings of wine were poured out at the base of the Temple altar (see Ex 29:38-40; Num 28:7). Evoking this imagery, St. Paul sees his martyrdom as an act of sacrifice and liturgical worship—the very same way we understand Christ’s death to be a sacrificial offering. St. Paul gives expression to the mystery of our initiation into Christ’s Body. In Him, our own human lives become a pleasing offering to the Father.

St. Paul has confidence that soon he will receive “the crown of righteousness” from the Lord. We should remember that this confidence, at the very end of his life, is rooted in the fact that he has “competed well … finished the race … kept the faith,” after 30 years of ministry. He was not so confident when the race was still in progress, as he wrote in 1 Cor 9:26-27: “Well, I do not run aimlessly, I do not box as one beating the air; but I pommel my body and subdue it, lest after preaching to others I myself should be disqualified.” He is an example to us of perseverance and lack of presumption in our lives with God.

Through it all, St. Paul says “the Lord stood by me and gave me strength, so that through me the proclamation [of the Gospel] might be completed.” He, like the psalmist in our previous reading, had every expectation that “the Lord will deliver me from every evil threat and will bring me safe to His heavenly kingdom.” Surely this came from St. Paul’s trust in the promise Jesus made to Peter: “Upon this rock I will build My Church, and the gates of the netherworld shall not prevail against it.” Jesus is building His Church through people like Sts Peter and Paul—people like us.

With St. Paul we want to say, “To Him be glory forever and ever. Amen.”

Possible response: Sts Peter and Paul, pray that God will raise up leaders and laypeople in His Church for His glory and the salvation of the world.