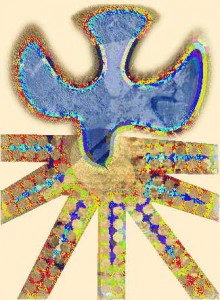 Today’s readings deepen our understanding of the mystery of Easter: Christ rose from the dead to live His life again in us.

Today we continue in Jesus’ Last Supper Discourse with the Twelve. He is speaking forthrightly to His friends about an imminent change in their three-year jaunt with the itinerant Teacher. Here we discover the dramatic difference between Jesus and all other teachers who came before or after Him. It is the singular distinction of Christianity, separating it from all the religions or philosophies the world has ever known. Jesus simply tells His apostles that Someone Else is coming.

“I will ask the Father, and He will give you another Advocate to be with you always, the Spirit of truth” (Jn 14:16-17). Why does this promise make Christianity unique?   When we grasp its meaning, we understand that Jesus came not only to reveal how to live a fully human life, in the image and likeness of God, but He also made it possible for His own life to be lived in us. With the coming of the Holy Spirit (the “Advocate”), believers will not simply be following an ethical system or a path to God. No, indeed. Jesus had something much more dynamic in store for those who believed in Him: “On that day you will realize that I am in My Father and you are in Me and I in you” (Jn 14:20). His plan was to send the Holy Spirit into the world to enlighten believers with the knowledge of how God wants us to live (for our own happiness), and to give them the power to actually live what they believe. Jesus, of course, assures His apostles that to love Him does mean to live as He had taught them: “Whoever has My commandments and observes them is the one who loves Me” (Jn 14:21). However, love for Jesus means not just a new way of living but a completely new life: “Whoever loves Me will be loved by My Father, and I will love him and reveal Myself to him” (Jn 14:21). What does this mean?

Followers of Jesus will receive in themselves, in their own bodies, the life we see in Him that so attracts us to Him. This will be possible because of the gift of the Holy Spirit, Whom Jesus promised to send, first to the apostles and then to all in His Church. This is why Christianity is different from every other formulation of how men should live, this personal life of Jesus in us, through the gift of His Spirit. Pope Emeritus Benedict XVI has summed this up well in Jesus of Nazareth: Holy Week (Ignatius Press):

This essential dynamic of gift, through which He now acts in us and our action becomes one with His, is seen with particular clarity in Jesus’ saying: ‘He who believes in Me will also do the works that I do; and greater works than these will he do, because I go to the Father’ (Jn 14:12). This expresses exactly what is meant by ‘I have given you an example’ from the account of the footwashing: Jesus’ action becomes ours, because He is acting in us.” (pg 62-63, emphasis added)

Being a Christian isn’t merely trying to be a good person, to live as we think Jesus would want. Being a Christian means Jesus lives His life in us. The other readings will help us explore how that happens.

Possible Response: Lord Jesus, thank You for Your promise to send Your Spirit to live in me. Please teach me how this works! It seems so mysterious right now.

This reading in Acts tells us what happened after the death of Stephen, a deacon who became the Church’s first martyr. A great persecution broke out against the believers in Jerusalem, and they fled the city. Instead of silencing the Good News (as the persecutors hoped), this scattering actually spread it. Philip, who had also been ordained a deacon, escaped to Samaria and “proclaimed Christ to them” (Acts 8:5). What enabled him to be fearless in doing the very thing that had gotten him run out of town in Jerusalem? He, along with Stephen and the others appointed as deacons, had been men “full of the Spirit and wisdom” (Acts 6:3). The Holy Spirit gave Philip the power to courageously do what Jesus had done: preach the Gospel without counting the cost.

Response to Philip’s ministry was dramatic. The people of Samaria saw him performing the same signs and wonders that had first been seen in Jesus. News of these conversions reached the apostles in Jerusalem (the Twelve were the only ones spared persecution, probably because of Gamaliel’s warning to the Sanhedrin to leave them alone; see Acts 5:38-39; 8:2). Peter and John went down to make sure the preaching and resulting conversions were consonant with the faith they had been charged to spread. Verifying that these were true believers, they laid hands on them so they could receive the Holy Spirit. Notice apostolic responsibility for continuity in the preaching that spread out away from their immediate oversight in Jerusalem (the kind of governance still practiced in the Church today). Notice something else, too. There was in the New Testament Church evidence of a two-step initiation into the life of Jesus: first, baptism, then the laying on of hands to receive the fullness of the Holy Spirit. Why did it develop this way?

We remember that when Jesus was at the Jordan River with John the Baptist, He first underwent baptism in water, and then the Holy Spirit descended upon Him like a dove. The two separate actions that began His public ministry were repeated first in the apostles. On Resurrection Day, Jesus appeared to them and breathed on them, saying, “Receive the Holy Spirit” (John 20:22).   Then, on the Day of Pentecost, the Holy Spirit fell on them dramatically, and they, too, began their public ministries. Thus, we should not be surprised to see that as the preaching of the Gospel began to spread out into Judea, Samaria, and the ends of the earth, initiation into the life of Christ involved two steps: baptism and the laying on off hands, or what we now call the sacrament of Confirmation. As the Church says, Confirmation “completes the grace of Baptism” and “…perpetuates the grace of Pentecost in the Church” (see CCC 1288 for a fuller explanation of the tradition of these two sacraments of initiation into the life of Christ). Here, then, is the pattern we are looking for: what happened in Jesus’ life (baptism, then anointing by the Holy Spirit) also happened in the apostles, then continued to happen in those who believed through their testimony, as in Samaria.

This is as clear a picture as we could want of the meaning of Jesus’ promise in the Gospel reading: “In a little while, the world will no longer see Me, but you will see Me; because I live and you will live” (Jn 14:19). The life of Jesus remains on earth in the lives of His believers, the Church.

Possible response: Lord Jesus, help us in Your Church today to continue proclaiming the Good News of life in Your Name. Forgive our complacency.

When it settles down over us that Jesus, in sending us the Holy Spirit, has given us His very own life, what might our response be? “Let all the earth cry out to God with joy” (Ps 66:1) seems reasonable, doesn’t it? The Holy Spirit, invisible to the world, does the unseen work of divinization in us—transforming and perfecting us so that one day, as St. John tells us, when Jesus appears “we shall be like Him, for we shall see Him as He is” (1 Jn 3:2b). Surely this truth loosens our tongue to sing God’s praises: “Come and see the works of God, His tremendous deeds among the children of Adam” (Ps 66:5).

In the epistle, Peter exhorts his Christian friends to live in the fullness of the truth we have seen promised in the Gospel and described in Acts. Because Jesus is living His life in us, we are always to “be ready to give an explanation to anyone who asks you for a reason for your hope” (1 Pet 3:15). Christians should be living in such a way that people are curious about what makes us tick. Now, if we were simply following a code of conduct, all that would be important would be to communicate its salient features. However, we see that what matters to Peter is not only what we say as we explain the Christian faith, but how we say it. We must say it “with gentleness and reverence, keeping your conscience clear” (1 Pet. 3:15). This is important because as Jesus lives His life in us, He wants to continue His great love for sinners. His life in us will want to keep us innocent of judgment or bad conduct of any kind. He will want our behavior, when we explain our faith, to be pure, so that if we are “defamed,” it will be the same kind of persecution Jesus experienced—“the righteous for the sake of the unrighteous” (1 Pet 3:18). That is how He led us to God; that is how He will lead others to God through us. Peter reminds us that Jesus was “put to death in the flesh, He was brought to life in the Spirit” (1 Pet 3:18). That very same Spirit now animates us, so that as Jesus was in the world, willing to “suffer for doing good” (1Pet 3:17), we are to be, too.

Possible response: Lord Jesus, I truly want to welcome You to live Your life in my own body today. Make my tongue ready to declare Your Name to others and my heart ready to love them as You do.