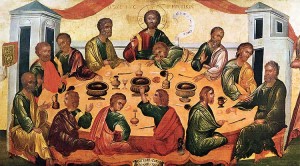 In today’s Gospel, we see the apostles as dense as they can possibly be, yet Jesus promises: “You will do the works that I do…and greater ones.” Really?

Today’s reading comes in the context of the Last Supper Discourse (Jn 13-17), when Jesus speaks to the Twelve more directly than we have yet seen. His hour has almost arrived; the time for parables is over. The apostles understand that one of them will betray Jesus. They are deeply disturbed. Twice in the preceding chapter Jesus unsettles them with these words: “Where I am going, you cannot come” (Jn 13:33, 36). Now, Jesus seeks to comfort them.

“Do not let your hearts be troubled. You have faith in God; have faith also in Me” (Jn 14:1). Jesus does not want His experience of betrayal, denial, and departure to rob His friends of their peace. He is going to leave them, but He tells them He is going to prepare a place for them so that He can return to take them with Him. So far, so good. Surely these words brought the Twelve some kind of comfort. Then came the twist: “Where I am going you know the way” (Jn 14:4).

What? The apostles were completely lost. Thomas speaks up for them: “Master, we do not know where You are going; how can we know the way?” (Jn 14:5). Imagine how frustrating this must have been for men who were increasingly aware that trouble was approaching. They were looking for details, a named destination, and a plan to get there. Jesus confounds them with this strange statement. Perhaps they found His answer even more mysterious: “I am the way and the truth and the life. No one comes to the Father except through Me” (Jn 14:6). How can a Person be both a destination and the path to reach it? Jesus gives the confused apostles the answer to this question, but, alas, they are too dense to grasp it. “If you know Me, then you will also know My Father. From now on, you do know Him and have seen Him” (Jn 14:7). The home Jesus would prepare for His followers was a dwelling place with God, and the “way” to that dwelling place was being revealed in Jesus: all His words, signs, wonders, and, definitively, His death and Resurrection would make it clear that God was in Christ, reconciling the world to Himself. To live and to die in Christ is the way home.

Philip makes clear that all this fell on deaf ears: “Master, show us the Father, and that will be enough for us” (Jn 14:8). Even Jesus was surprised by this density: “Have I been with you so long a time and you still do not know Me, Philip?” (Jn 14:9). The apostles had not yet fully grasped Jesus’ relationship with the Father. It was going to take the Resurrection, Ascension, and descent of the Holy Spirit before they could understand these weighty words. Nevertheless, while they were still embarrassingly dim, Jesus makes an astonishing promise to them: “I say, whoever believes in Me will do the works that I do, and will do greater ones than these because I go to the Father” (Jn 14:12). Remarkable! We can feel the human weakness of the apostles—always thinking about the wrong thing, missing the point entirely. Yet, because Jesus is the Way (showing us how to live as men in the image and likeness of God), the Truth (teaching us what is true about God and man), and the Life (pouring His own glorified life into ours through the sacraments), it is He Who guarantees the future of His Church. Can it really be that, through His followers, He will do even greater works than He did while He was on earth? To get there from today’s Gospel, we will need to see a breathtaking transformation of some sort in the other readings. Will we?

Possible response: Lord, I think sometimes You could say to me: “Have I been with you so long and you still do not know Me?” Please help me know You as You are.

This passage in Acts describes an event that could have caused a damaging split in the apostolic Church. The “Hellenists” (Greek-speaking Jewish widows who had previously lived in various parts of the Roman empire) felt slighted in food distribution (widows were utterly dependent on care by others) in favor of the “Hebrews” (Aramaic-speaking Jews native to Palestine).  See how the Twelve react to this problem with wisdom, compassion, and clarity of mission. Are these not also the traits we first saw in Jesus? In just these few verses, we can see men very different from the ones we left confused and uncertain in the Gospel reading. We know what happened in between, of course. Jesus accomplished His work of Redemption, and these men are showing its fruit. Their first concern is “prayer and the ministry of the word” (Acts 6:4), the same priorities of their Master when He lived among them. However, they recognized their responsibility, as leaders of the Church, to prevent a break in the fellowship of believers. They confidently directed the election of the first deacons (all Greek-speaking men, apparently, insuring justice for the Hellenist widows), and, with this rift laid to rest, “the word of God continued to spread” (Acts 6:7), greatly increasing the number of disciples. “Even a large number of priests were becoming obedient to the faith” (Acts 6:7). Did we see Jewish priests following Jesus in His day? When we recognize this kind expansion of the Church in Jerusalem, we start to understand what Jesus meant by His promise of “greater works” to the apostles. His own ministry was limited in time and space. The global spread of the Gospel was going to happen through His followers. This is the wonder of the Mystical Body of Christ, the Church.

Possible response: Jesus, I am thankful to be part of the Church that has continued Your work for 2000 years. Let me never grow tired of doing it!

Recall that in the Gospel, Jesus comforted His apostles, who were about to undergo a terrible trial, with a simple exhortation: “…you have faith in God; have faith also in Me…Believe Me” (Jn 14:1, 11). It was a call to trust. They persevered, with some bumps, and became the men we read about in the first reading. The psalmist gives voice to all who have the experience of trusting in Jesus’ words, even when they seem to promise the impossible (as they did to the Twelve in the Gospel): “Upright is the word of the LORD, and all His works are trustworthy” (Ps 33:4). This psalm is a song of praise from people who have learned that trusting the LORD is their best hope for happiness and peace: “See, the eyes of the LORD are upon those who fear Him, upon those who hope for His kindness” (Ps 33:18). The apostles were the first to trust in this way, and they have fearlessly taught us to do the same: “LORD, let your mercy be on us, as we place our trust in you.”

In the epistle, Peter helps us understand more clearly how it can be that Jesus’ followers will do greater works than Jesus did in His earthly life. He describes Jesus as “a living stone” (1 Pet 2:4), making use of several Old Testament references to explain that Jesus is God’s New Temple (a Person, not a building). Temple worship in the Old Covenant was meant to foreshadow the true worship of heaven, in spirit and in truth. It was this claim by Jesus that was rejected by many Jews, thus becoming a stumbling stone to them. The dramatic surprise in God’s plan, however, is that we, too, are “living stones” in this New Temple: “…let yourselves be built into a spiritual house to be a holy priesthood to offer spiritual sacrifices acceptable to God through Jesus Christ” (1 Pet 2:5). By virtue of our baptism, all believers can participate with Christ in the salvation of the world. Friends, human language falls short to explain the implications of this incredible truth. However, the Catechism cannot be outdone in its formulation, and it is worth a lengthy quote:

Hence the laity, dedicated as they are to Christ and anointed by the Holy Spirit, are marvelously called and prepared so that even richer fruits of the Spirit maybe produced in them. For all their works, prayers, and apostolic undertakings, family and married life, daily work, relaxation of mind and body, if they are accomplished in the Spirit – indeed even the hardships of life if patiently born – all these become spiritual sacrifices acceptable to God through Jesus Christ. In the celebration of the Eucharist these may most fittingly be offered to the Father along with the body of the Lord. And so, worshipping everywhere by their holy actions, the laity consecrate the world itself to God, everywhere offering worship by the holiness of their lives. (CCC 901)

When the meaning of this paragraph sinks in, our lives are forever changed. The saving works of Jesus are not confined to thirty-three years in Palestine.  Even in our very ordinary lives, He continues that work.

Let St. Augustine have the last word on this dazzling truth, in his commentary on John’s Gospel: “It is not that he who believes in Me will be greater than Me, but only that I shall then do greater works than now; greater, by him who believes in Me, than I now do by Myself without him” (In Ioann, Evang., 721).

Possible response: Lord Jesus, I know that all parts of my life can become spiritual sacrifices to save the part of the world that only I experience. Help me never to forget this.