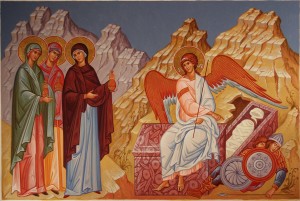 Today’s Gospel describes an absence that confounds the disciples, preparing them for the Presence their hearts desire.

On Palm Sunday, the narrative of our Lord’s Passion ended with these words:  “So they [the chief priests and Pharisees] went and secured the tomb by fixing a seal to the stone and setting the guard” (Mt 27:66).  Jesus’ dead Body had been quickly prepared for burial (because the Sabbath sundown approached), and He was laid in the fresh tomb of a rich man.  Then, for His followers, there was silence and utter desolation.  We can only imagine how much “rest” they got on what must have been the longest Sabbath day of their lives.

Today, St. John tells us, “On the first day of the week, Mary of Magdala came to the tomb early in the morning, while it was still dark” (Jn 20:1).  Now that the Sabbath was over, she was coming to finish the burial anointing.  Why did she arrive so early, before dawn?  Anyone who has grieved over the death of a loved one knows the answer to this question.  The finality of death, even for those prepared for its arrival, is literally un-believable.  We cannot bear the thought of not seeing this dear one again.  Mary had the opportunity to be near Jesus once more, to see and touch Him.  Even in death, He drew her to Him with an irresistible force.

Mary saw that the stone had been removed from the tomb.  Shock!  We can feel her eagerness to be with Jesus again, yet He was not in the tomb.  St. John wants us to see that the followers of Jesus were slow to understand what He had told them many times:  He would rise from the dead.  Mary believed that someone had taken the Lord and put Him elsewhere.  Imagine this for a moment:  profound grief was compounded by profound horror.  For Mary, the empty tomb was not a source of joy.  It was an agonizing twist in what was becoming a nightmare.

Peter and John (“the other disciple whom Jesus loved”) ran to the tomb with Mary’s news.  They, too, were drawn to the Lord in this energetic race.  John arrived first, but notice his deference to Peter, the Lord’s own appointed leader of the apostles.  Once inside, they quickly realized that grave robbers were not responsible for the absence of Jesus.  The burial cloths (fine, expensive linen) would never have been left behind by robbers this way.   No, something big was underway.  St. John tells us that when he entered the tomb and saw the burial cloths, “…he believed” (Jn 20:8).  What did he believe?  Only that Jesus was really gone from the tomb—itself a great mystery.  He goes on to make that clear:  “For they did not yet understand the Scripture that He had to rise from the dead” (Jn 20:9).

So, on Easter Sunday, the Gospel reading leaves us with only clues.  How interesting!  There is not, as we might expect, the boundless joy of the disciples seeing Jesus alive again.  Instead, we spend time with His followers in their longing, anxiety, sadness, and utter confusion.  We, of course, know what’s going on, but they don’t as yet.  St. John wants us to linger for a spell in the very human reactions to an astounding miracle.  He helps us feel deeply the question that boggled the disciples:  What has happened to Jesus?  It is only by entering fully into this human dilemma that we are truly prepared for the answer:  Jesus has conquered Death.  The worst thing that has ever happened in human history (men killed the “Author of life,” Acts 3:15) has become the best thing that has ever happened in human history, and man’s history has been changed forever.

Possible response:  Lord Jesus, sometimes I am shocked that You don’t seem to be where I expect You.  Help me believe that what I feel is Your absence will always lead to Your Presence.

Lord Jesus, what have I heard many times from You and not yet understood?

If we think about what we have seen of Peter in the readings for Holy Week, this passage from Acts might leave us asking a question:  What has happened to Peter?  We remember him on Palm Sunday, denying the Lord three times and fleeing when Jesus was crucified.  Today’s Gospel tells us that Mary Magdalene had to go fetch Peter with her news, because he and the other apostles were hiding “for fear of the Jews” (Jn 20:19).  Yet here we see him boldly preaching the Good News (to the same Jews who had terrified him) that death could not hold Jesus.  We see the effects in him of the Resurrection—more clues to its reality.   Peter testifies not only to “Jesus of Nazareth,” Who “went about doing good” (Acts 10:38), but also to the fact that he “ate and drank with Him after He rose from the dead” (Acts 10:41).   The commission he and the other apostles received from the Risen Jesus, confirmed by the anointing of the Holy Spirit at Pentecost, turned Peter inside out.  What a transformation from the befuddlement of the empty tomb!  Freed from his cowardice and fear, he wanted the world to know that Jesus is alive and that “everyone who believes in Him will receive forgiveness of sins through His Name” (Acts 10:43).

Possible response:  Lord, this Easter season, please loosen my tongue to bear witness to Your empty tomb and to the meal we still eat and drink with You in the Mass.

The psalmist announces:  “This is the day the LORD has made; let us rejoice and be glad.”  Great joy like this might make us wonder about its cause:  What has happened to the psalmist?  If we read the entire psalm, we see he describes a time of unthinkable reversal in his life, when he was in terrible distress, and his enemies surrounded him “like bees” that “blazed like a fire of thorns” (Ps 118:12).  He recounts that he was “pushed hard, so that I was falling, but the LORD helped me” (Ps 118:13).  In fact, the LORD’s deliverance sprung him from death:  “I shall not die but live, and declare the works of the LORD” (Ps 118:17).  Yet what really seems to fuel the psalmist’s elation is that “the stone which the builders rejected has become the cornerstone” (Ps 118:22).  The psalmist’s enemies had rejected him, but God upset their plans to be rid of him, and, instead, set him like a cornerstone, a rock of solid strength.  Now we understand the joy of the psalmist, and why we are using his words to rejoice on Resurrection Sunday.  The reversal he experienced from God’s mighty hand ignited his heart to sing God’s praises on the day of his deliverance and victory.  His words help us re-live this Day the exquisite joy of Jesus’ victory over sin and death, our most feared enemies.  When the meaning of the empty tomb washes over us, we will echo the psalmist’s awe:  “By the LORD has this been done; it is wonderful in our eyes!” (Ps 118:23)

In his epistle, St. Paul writes a most remarkable exhortation to his Christian friends (and to us):  “Think of what is above, not of what is on earth” (Col 3:2).  Why should we, earthbound creatures that we are, be seeking what is above?  What has happened to us?  St. Paul tells us that the death and Resurrection of Jesus, our focal point all during Holy Week, has happened to us, too.  In baptism, we died with Christ and rose again with Him into a brand new life.  The power that raised Jesus from the dead has seated us with Christ:  “Your life is hidden with Christ in God” (Col 3:3).  What a transformation for us!  The empty tomb of the first Easter has reverberated all the way out to us now, in the 21st century.  Its meaning is not only historical but personal.  In Christ, we are forgiven our sins, released from death, and destined for glory:  “When Christ your life appears, then you will appear with Him in glory” (Col 3:4).  Allelulia!

Possible response:  Father, forgive me when I try to make life on this earth my only goal.  Help me to set my mind on heaven.