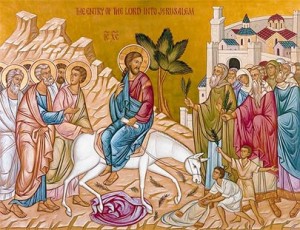 Palm Sunday’s Gospel is a drama that is at once both intensely human and profoundly supernatural—the mystery of Christ’s Passion.

On Palm Sunday, Catholics all over the globe, in every nation and time zone, in public and sometimes in secret, stand at attention to hear the longest Gospel narrative of the entire liturgical year.  This riveting episode needs no interpretation.  Young and old, male and female, educated and uneducated, sophisticated and simple—all of us are caught up in the story and understand it.  Why is it so universally accessible?  The answer must be because it is a truly human drama, with the kinds of characters, action, plots and subplots, emotions, twists and turns that all of us know, because we either have lived or are now living them.  Who among us has not experienced something of betrayal, fear, humiliation, misrepresentation, powerlessness, malice from others, remorse, and dark foreboding?  This Passion story is not one told in philosophical, theological, or metaphorical language.  No, this story is our story, full of the truths of life that no one ever has to teach us.

Because of its length and density of details, a comprehensive commentary is not possible here (see Jesus of Nazareth:  Holy Week by Pope Emeritus Benedict XVI for a truly glorious examination of all the Passion Scriptures).  Still, many of us can be helped to stay attentive (we need help because, alas, we are like the apostles who kept dozing while Jesus agonized in Gethsemane) as it is read at Mass by pondering beforehand one of the story’s most fascinating themes:  irony.

Ever since the Garden of Eden, when the serpent promised “opened eyes” to Adam and Eve and instead caused spiritual blindness, the human experience has been laced with irony (words or events that seem to mean one thing but actually mean something else).  We never grow tired of seeing it exposed, in others or in ourselves (that’s why we love it in literature, humor, and the daily newspaper).  This Gospel story, being very human, abounds in irony.  Let’s follow some of its threads:

At the Last Supper, all the apostles deny that they could possibly fail Jesus, yet all of them, except John, do (Mt 26:56).  Judas kisses Jesus, a sign of fraternal love, but the kiss was one of betrayal.  Those who arrest Jesus show up with swords and clubs, yet all they had ever seen Him do was sit peacefully in the Temple and teach.  Both Caiaphas and Pilate, who conspired to kill Jesus, confess Him with their own lips as “Christ, the Son of God” (Mt 26:63) and “the king of the Jews” (Mt 27:11), without Jesus having to say anything except, “You have said so.”  The man, Barabbas, whose name means “Son of God” and who was guilty of insurrection (sometimes translated as “robber”), is released from prison in exchange for the true “Son of God,” who paid the price for the release of all the rebellious “sons of God”—you and me.  The crowd crying out for Jesus’ crucifixion calls, “His blood be upon us and our children”—and it was.  However, His blood would not be the blood of guilt, as they supposed, but the blood of atonement, for their forgiveness.  With their own lips, they welcomed it.  Unthinkable irony!

And there’s more—the soldiers dress Jesus like a king with a robe, a crown, and a scepter.  They think this is for His humiliation and exposure as a fraud, but instead it acknowledges that He is the king of a kingdom not of this world.  Over His Cross, in a sign written in the three main languages of the Greco-Roman Empire, they unwittingly declare Jesus king of all nations. (Note:  the three languages declaring Jesus as king are still make appearances today in the Mass.  Kyrie is Greek; Alleulia is Hebrew; Sanctus is Latin.)   Finally, in an attempt to make sure that no one could possibly steal the body of Jesus and claim He had risen from the dead, they secure the tomb “by fixing a seal to the stone and setting the guard” (Mt 27:66), thus guaranteeing that the only explanation for the re-appearance of Jesus, should it happen, would be His Resurrection.  The “king” Who looks weak and impotent, dying at the hands of those who despised Him, would, by this very weakness and suffering, defeat Death, man’s most powerful enemy, the greatest ironic reversal of all time.

No wonder this is a story whose appeal will never be exhausted!

Possible response:  Jesus, what is there to say to You in gratitude for what You endured for me?  I owe You my life!

The prophet, Isaiah, because he lived during a time of great covenant unfaithfulness in God’s people (about the 8th century B.C.), had to deliver dire warnings of coming catastrophe unless the people repented.  He prophesied that judgment would inevitably fall, but Isaiah also spoke of a coming restoration, when their punishment would end, and the people would once again flourish in their land.  Remarkably, Isaiah’s prophecies included detailed descriptions of a Suffering Servant who would play a significant role in this restoration.  Through his innocent, willing suffering, the sin of the people would be forgiven.  Here, of course, we have an astounding Messianic prophecy of Jesus, the Innocent One Who suffered on behalf of all people, making our redemption possible.  There are several “songs” in Isaiah about this Suffering Servant.  Today’s reading highlights the determination of the Servant to stay the course set out for him, regardless of the physical violence and acts of degradation against him.  This prophecy was fulfilled in Jesus, Who “steadfastly set His face to go to Jerusalem” (Lk 9:51) and quietly endured contemptuous brutality, as we see in the Gospel reading.  Although Jesus wrestled in the Garden with His natural desire to avoid suffering, He rose from His agonized prayer to fulfill Isaiah’s words:  “I have not rebelled, have not turned back” (Isa 50:5).

Possible response:  LORD, I need the courage and perseverance of the Suffering Servant to do Your will when I face opposition.  Please grant me that grace in the Eucharist today.

We can’t read this psalm without being amazed at how accurately it describes some of the details of the Crucifixion.  That is why we understand it as a Messianic psalm, written by David, King of Israel, hundreds of years earlier.  David, like Jesus, was persecuted unjustly.  His enemies wanted to destroy him, and his suffering made him cry out, “My God, my God, why have you abandoned me?”  However, in a verse not included in our reading, David acknowledges that God has not forsaken him:  “For He has not despised or abhorred the affliction of the afflicted; and He has not hid His face from him, but has heard when he cried out to Him” (Ps 22:24).  This is the turning point of the psalm.  David goes on to see a time when he will be restored and be able to “proclaim Your Name to my brethren in the midst of the assembly” (Ps 2:25), even being able to “eat and be satisfied” (Ps 22:26).  In other words, David sees life after his suffering, something wonderful from God on the other side of it that will cause all Israel to “give glory to Him…revere Him” (Ps 22:23).  Is it any wonder, then, that this psalm was on the lips of Jesus as he was dying on the Cross?  The separation from God He experienced as He bore the full weight of all humanity’s sin made Him feel abandoned, as did David, but He had the hope of the psalmist, too:  “Posterity shall serve Him; men shall tell of the LORD to the coming generation, and proclaim His deliverance to a people yet unborn” (Ps 22:30).  We cannot doubt that this psalm, known so well to Jesus, gave Him courage as He drank His cup of suffering to its bitter end.

St. Paul gives us a summary of the Incarnation and, with it, a preview of what lies beyond the sober details of today’s Gospel narrative.  Jesus left His glory in heaven to become one of us, yet He became more “us” than we are ourselves!  God made us for obedience to Him, which would enable us to live in His “image and likeness” and be truly happy.  We, however, always choose disobedience, so, on our own, we never really reach who we actually are.  Jesus chose perfect obedience for us, even unto death.  Therefore, God gave Him the Name that will eventually cause every knee to bend and every tongue confess that “Jesus Christ is Lord.”  In all our other readings today, we see the Suffering Servant, stripped of power and glory, the very image of weakness and defeat.  In this epistle, we see King Jesus, exalted and glorified and worthy of praise—the perfect anticipation of the joy of Easter!

Possible response:  King Jesus, help me to believe that the way of humility and obedience is always the path to glory.