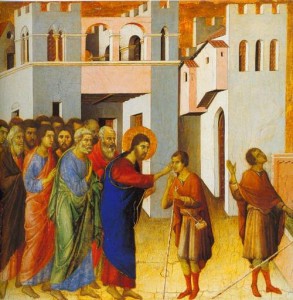 Today’s Gospel tells an engaging, sometimes humorous, story of a blind man who can see and men with vision who are blind.

In the Gospel we are immediately introduced to a contrast that appears in all four lectionary readings:  sight and blindness, darkness and light.  There are layers of meaning for us as we follow the action of this story; it is no surprise that we are given this passage as a meal from the Table of the Word during Lent.  There is much nourishment here.

“As Jesus passed by He saw a man blind from birth” (Jn 9:1).  In just these few words, we can understand we are about to hear a story about ourselves.  Ever since our first parents fell from grace in the Garden, each one of us has been “blind from birth.”  Recall the serpent’s tempting offer to Eve.  He encouraged her to eat the fruit because “…when you eat of it your eyes will be opened, and you will be like God…” (Gen. 3:5).  In fact, when Adam and Eve ate the forbidden fruit, a profound blindness settled over them.  The Church tells us that through their disobedience, they lost the supernatural grace in which they were created.  That grace was their lens on reality.  Without it, they could not see God, each other, or even themselves in truth.  All their descendants came into the world without the grace of clear vision.  We are all spiritually “blind from birth.”

The disciples assume the man’s physical blindness comes as a result of someone’s personal sin.  Jesus’ answer likely surprised them.  He suggests that the presence of this physical disability has been allowed by God in order to demonstrate His glory.  The original Fall of man brought down both God’s mercy and His justice.  He had a plan to counter and defeat His enemy in the Garden (“the woman and her seed”), but, in the meantime, suffering and death would be an ever-present reminder that this world and these sinful bodies are not as God created them to be.  Suffering will become our opportunity to “see” ourselves as we really are:  we are utterly, completely dependent on God.

Jesus tells His disciples that He is the “light of the world” (Jn 9:5b), then He demonstrates what that means.  He heals the man born blind with clay and water, which are full of sacramental symbolism for us.  Ordinary elements in nature become the supernatural means of healing for our congenital blindness caused by sin.  In the waters of baptism, Jesus restores our “sight.”  We reject the blindness offered by the serpent and instead choose the sight God always meant us to have.

The newly sighted blind man is hauled before the Pharisees; they help us to see what being blind from birth looks like.  Rather than seeing a miracle, the Pharisees see a miscreant—Jesus healed the man on the Sabbath. He is a lawbreaker and an outsider:  “We know that God spoke to Moses, but we do not know where this one is from” (Jn 9:29).

The story unfolds with a deepening of blindness in the Pharisees and a deepening of vision for the blind man, who first describes his Healer as “the man called Jesus” (Jn 9:11).  As Jesus seeks him out after his expulsion from the Pharisees, the man discovers Jesus is not just “a prophet” (Jn 9:17), but the “Son of Man” (Jn 9:36), and he worships Him.  The Pharisees, however, continue in their willed blindness, in spite of all the evidence and testimony about Jesus.  They completely reject their need for sight:  “Surely, we are not also blind, are we?” (Jn 9:40).  Sadly, Jesus tells them that in this refusal, their “sin remains” (Jn 9:41).

Possible response:  Jesus, please heal my eyesight so that I see You, others, and myself in truth.  Sometimes my vision is blurred.

The story of God’s choice of David to replace disobedient Saul as king of Israel reminds us why our natural vision needs to be healed.  The LORD sent Samuel, priest and last of the judges, to Jesse of Bethlehem.  The new king was to be chosen from among the sons of Jesse.  Samuel saw the first son, Eliab, and “thought surely the LORD’s anointed is here before Him “ (1 Sam. 16:6).  However, Eliab was not the LORD’s choice.  “Do not judge from his appearance or from his lofty stature, because I have rejected him.  Not as man sees does God see, because man sees the appearance, but the LORD looks on the heart” (1 Sam. 16:7).  Real vision is looking beyond appearances.  David, the youngest son of Jesse and a mere shepherd boy, was God’s choice.  The one who looked least like a king was going to lead God’s flock.  The blindness with which we are born—this penchant for seeing only appearances—explains why the Pharisees in the Gospel story couldn’t “see” Jesus.  The man whose sight was restored in the water could.  When the healed man tried to bear testimony to the Pharisees, what did they “see”?  Only the appearance of one “born totally in sin” (9:34) who had nothing to teach them.  They were blind, indeed.

Possible response:  Father, forgive me for the times I have judged by appearances.  Help me see as You do.

The psalmist elaborates on the paradox of a shepherd being chosen as king of Israel.  What kind of king can a shepherd be?  When He is God’s choice, He is the shepherd described in this psalm.  The Good Shepherd, because He is “the light of the world” (Jn 9:5b), enables the psalmist to “see” even in the dark:  “Even though I walk in the dark valley I fear no evil; for You are at my side with Your rod and Your staff that give me courage” (Ps. 23:4).  Wherever the Good Shepherd is, there is light, clarity, vision:   “The LORD is my shepherd; there is nothing I shall want.”

St. Paul describes the believer’s movement from darkness (sin) to light (holiness), just as we watched the blind man move from darkness to light in the Gospel.  In baptism, we were healed of our blindness to God and have now, as St. Paul says, become “children of light” (Eph. 5:8).  He exhorts us to “try to learn what is pleasing the Lord” (Eph. 5:10) in this new life.  That life of blindness to God (which is self-absorption, as we saw in the Pharisees) was like death.  St. Paul uses words that may have been from an ancient baptismal liturgy to call us to a life of true vision:  “Awake, O sleeper, and arise from the dead, and Christ will give you light” (Eph. 5:14).  We are to live as people who have nothing to hide.

Possible response:  Father, can I remember to live as a child of light?  I do want to learn what pleases You in this season of Lent.