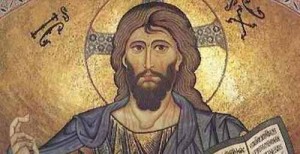 The story of the Samaritan woman at the well plants us deeply into the mystery of salvation—God’s great love for sinners.

The story of the Samaritan woman at the well plants us deeply into the mystery of salvation—God’s great love for sinners.  During Lent, we take special notice of ourselves as sinners, spending time and effort to recognize the seriousness of sin and to rejoice in Christ’s victory over it.  Our lectionary readings highlight both of these Lenten realities in a most wonderful way.

As the Gospel story begins, we see Jesus resting, in the heat of the day, at a well in Samaria.  A woman approaches, and Jesus starts a conversation with her.  In the Old Testament, wells were often the place where marriage betrothals began, because they were one of the few places where women appeared in public.  Drawing water was women’s work, and there were always lots of women around wells.  Two of Israel’s patriarchs, Isaac and Jacob, found their wives at wells, as did Moses.  So, when the Church looks at this story of Jesus meeting a woman at a well, she sees a romance—God in search of His bride, the Church.  Jesus expresses this desire in terms of His thirst:  “Give me a drink.”  God is thirsty for us, for sinners.   Even on the Cross, Jesus gasped this out:  “I thirst.”  What an important truth to understand!  Our sin can discourage us and lead us to despair without it.  As we see here, it is Jesus Who takes the initiative.  The Bridegroom seeks His lover.

The conversation that follows shows an eagerness in Jesus to reveal Himself as the Messiah to this woman that we don’t see in any other New Testament story.  He wants to give her the “living water” that comes from faith in Him.  He repeatedly directs her attention away from the water in the well to the thirst He knows she has in her soul.  What was it about this woman that moved Jesus to push so hard to make Himself known to her as the Messiah, when usually He wanted everyone to keep quiet about it and not say anything?

What better person could Jesus have chosen to show the world that he came for sinners?  The woman, representing all of us sinners, has nothing at all to offer Jesus except her own thirst for God.  She had questions, she had thirst.  Just as Jesus knew about the husbands, He knew about the thirst.  His thirst met her thirst, head-on.  “The woman said to Him, ‘I know that the Messiah is coming…when He comes, He will tell us everything.’  Jesus said to her, ‘I am He, the One speaking with you.’”

The woman got it!  She leaves her water jar at the well (not thinking about that kind of water anymore), and she goes into town to tell others (not thinking about her reputation anymore) about Jesus.  Her life would never be the same.  She has already started to taste the Living Water.

Look at what happens next in this story.  The disciples return and want Jesus to eat—they assume He is starving.  Is He?  “But He said to them, ‘I have food to eat of which you do not know.’”  The disciples are baffled by this, but we shouldn’t be.  It isn’t water and food that Jesus is looking for—He’s on the hunt for sinners who are, even without knowing it, looking for Him.  He is satiated by the exuberant faith of a helpless, outcast sinner.  The Bridegroom rejoices in the Bride

Jesus, You are always looking to give me what I often look elsewhere to get.  Help me quench my thirst with Your Living Water.

I am here today feeling the weight of my sin.  I need to remember that I am just the person you are looking for.

The reading in Exodus gives us the history of the first time God gave His people “living water.”  As Israel left Egypt and headed towards the Promised Land, they experienced the terrible thirst of traveling in the desert.  Look at their reaction to the lack of water.  They grumbled against Moses, God’s appointed leader, and accused him of wanting them dead.  In grumbling against Moses, of course, they were grumbling against God.  After all the miracles they had seen God do to deliver them from slavery, instead of humility and trust, they arrogantly wanted God to prove He was really there.  This kind of doubt about God’s character goes all the way back to the Garden, when the serpent convinced Adam and Eve that God wasn’t really looking out for their best interests.  No wonder Moses was exasperated with them!

Nevertheless, God gave these people water from a rock.  When Moses strikes the rock with his staff, water flows out.  In the New Testament, St. Paul looks back on this episode (read 1 Cor. 10:1-4) and sees the rock as a pre-figuring of Christ on the Cross, Whose side was struck by a soldier’s lance and both water (signifying the Holy Spirit) and blood (signifying the Eucharist) flowed out.  In the desert, at a well in Samaria, and on the Cross, God desires to give Living Water to sinners.

LORD, forgive me when I doubt that You know or care about my situation.  Thank You for being faithful even when I’m not.

Father, grumbling comes way too easily to me.  Help me change my grumbling to gratitude.

When we read the Exodus account of Israel’s grumbling and doubt about God, we are tempted to be repulsed and ask, “How could they be so ungrateful and obnoxious?”  Instead, it would be better for us to heed the psalmist’s exhortation:  “If today you hear His Voice, harden not your hearts.”  The story of Israel is our story.  What we see in their hearts lurks in ours, too.  As we follow Jesus, the New Moses, on our way home to Heaven, we will face trials, difficulties, and deprivations, just as Israel did.   We might be tempted to say to God, “Where ARE You?”  We might think He’s out to get us.  Trials should never lead us to say to God, “Prove You are here.”  Instead, our posture should be one of praise (“let us acclaim the Rock of our salvation”), worship (“let us kneel before the LORD Who made us”), and trust (“we are the people He shepherds, the flock He guides”).

Leave it to St. Paul to put all of this in graphic perspective for us.  Do we want to know how much God loves us?  We can ask ourselves a simple question:  Would I be willing to die for those ungrateful wretches in the wilderness, who grumbled against God and tested Him?  Well, I might be willing to die for someone as good as Moses, but for those folks?  Never!  God, however, proves His love for us in that “while we were yet sinners, Christ died for us” (Rom. 5:8).  Nothing—not even the worst we can dredge up from our hard, self-absorbed souls—can stop God’s love for us.  Nothing will quench His thirsty love for His creatures but the likewise thirsty creatures themselves.  This is why St. Paul confidently writes that, in Christ, we have “peace with God” and that He wants nothing more than to pour into our hearts the Living Water of the Holy Spirit.  Amazing!

Possible response:  Lord Jesus, will I ever understand how much You love me?  Will I ever be willing to love other sinners as much as You love me?