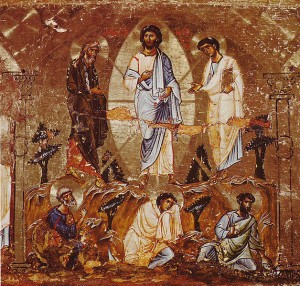 Jesus takes His closest friends up a mountain to pray, an action packed with meaning for Jews.  Why?

The meaning of today’s Gospel reading is greatly enriched if we understand the context in which it appears, both within Matthew’s Gospel and the larger story of salvation history.  Time spent on this will bear good fruit.

In Matthew 16, after Peter’s confession of Jesus as the Christ, the Son of God, the apostles get a nasty shock.  Jesus tells them that He is destined for suffering and death.  When Peter resists, Jesus sharply rebukes him (“Get behind Me, Satan!” in 16:23) for thinking as men do about suffering, not as God does.  To men, this kind of suffering for the powerful Son of God would mean weakness, impotence, and failure.  Jesus wants to teach the apostles that His suffering and death will be the path to glory.  He has even more disturbing news, too.  “If any man would come after Me, let him deny himself and take up his cross and follow Me” (16:24).  A call to discipleship is a call out of self to follow Jesus, to share His sufferings, no matter what the cost.  As disturbing as all this might be, Jesus assures the apostles that suffering and death won’t be the end.  “Truly, I say to you, there are some standing here who will not taste death before they see the Son of Man coming in His kingdom” (16:28).

Six days after this conversation, “Jesus took with Him Peter, James, and John his brother, and led them up a high mountain by themselves” (17:1).  Thus begins the episode in today’s reading, when these three apostles see Jesus as they have never seen Him before—radiating divine light and talking with Moses and Elijah, the only men in the Old Testament ever to talk with God on a mountain.  Interestingly, there were prophecies about the “reappearance” of both these men in the Scriptures (see Deut. 18:15; Malachi 4:5).  The apostles received a privileged revelation of Jesus’ divinity within His humanity, because both His face (divinity) and His garments (humanity) “shone like the sun.”  Here was the fulfillment of Jesus prophecy that “some standing here” would behold the glory of the Son of Man in His kingdom.  Here, too, was the proof that whatever suffering lay ahead for Jesus, it did not come out of weakness.  It was suffering He freely chose.

This revelation came in the context of a foundational event in Israel’s history—God’s covenant with His people on Mt. Sinai after their exodus from slavery in Egypt.  There He gave Moses and the people the Ten Commandments (or “Ten Words,” as they were often called in Israel), and He came down on the mountain and spoke to the people out of a fiery cloud of smoke.  His Voice terrified them so much that Moses had to reassure them:  “Do not fear, for God has come…that the fear of Him may be before your eyes, that you may not sin” (Ex. 20:20).  Why was sinning to be avoided?  It was a bondage worse than slavery in Egypt.  The “Ten Words” were a path out of sin for the people.  The fireworks on Mt. Sinai were a severe mercy to them, as Moses explained so well.  Later, Moses took three friends up the mountain with him to commune with God.  Moses spent so much time conversing with God in the fiery cloud that his face shone with light when he returned to the camp below.

None of this history was lost on Peter.  Why does he suggest building three tents (or “booths”)?  Luke’s Gospel tells us that Moses and Elijah were talking to Jesus about His departure (“exodus” in Greek).  The people of Israel remembered their exodus out of Egypt, as well as the giving of the Law on Sinai, in the Feast of Tabernacles (or “Booths”):  “You shall dwell in booths (tents) for seven days…that your generations may know that I made the people of Israel dwell in booths when I brought them out of the land of Egypt; I am the LORD your God” (Lev. 23:42-43).  No wonder that when Peter heard of Jesus’ exodus, he wanted to build tents and preserve this moment a little longer!

Jesus’ new exodus was not a departure from Jerusalem, however, nor was it to be restricted to the people of Israel.  He was to defeat God’s enemy, Satan (not Pharaoh), to lead all men out of bondage to sin (which is the bondage to self) and death, and to take them on a journey to their true home, Heaven.  God’s Voice from the cloud declared, “This is My Beloved Son, with whom I am well pleased; listen to Him.”  Jesus is the New Moses, as well as the new Law.  God’s “Ten Words” become His One Word:  Jesus.  We only hear God the Father speak twice in the whole New Testament, at Jesus’ baptism and here.  Both times He speaks only of Jesus.  God, the Father, says to us:  “Listen to Him” on this journey home.  Mary, His Mother, as she did at Cana, says to us:  “Do whatever He tells you” on this journey home.

When the apostles heard God speaking from the cloud, they were frightened and fell to the ground, always an appropriate response to God’s Voice.  Jesus touched them and said, “Rise, and do not be afraid.”  They had been told of the suffering that lay ahead, both for Jesus and themselves.  They had seen the glory that lay ahead, too, a glory they were destined to share, just as Moses and Elijah did.  They were humbled and brought low, but Jesus called them, with His touch, to begin their journey with Him without fear.  Their own transfiguration had begun.

Possible response:  Lord, help me this Lent to see that the glory Your suffering gained is meant for me, too—both the suffering and the glory.  I often try to get one without the other.

We might expect the Old Testament reading to be from the Book of Exodus, since the Transfiguration draws so heavily upon that history.  Instead, we go all the way back to Genesis, to the first “exodus” of God’s people.  When God called Abram, He said, “Go forth from the land of your kinsfolk and from your father’s house to a land I will show you.”  This is the first conversion in salvation history.  On the strength of God’s promise, Abram had to pack up his family and leave for a place he didn’t know.  This kind of leave-taking, or “exodus,” is always at the heart of conversion.  To make our journey home to heaven, we must always leave something behind for something better.  In this, Abram is our “father in faith.”  God’s promise to him was to bless “all the communities of the earth” through him, and that blessing comes through his descendant, Jesus, Who leads all nations back to God.

Possible response:  Lord, are you asking me today to “go forth,” letting go of something and holding on only to You?  Please help me to trust You as Abram did.

The psalm continues a theme of deliverance, of God’s promise to preserve all those who are will to obey His Voice:  “See, the eyes of the LORD are upon those who fear Him, upon those who hope for His kindness, to deliver them from death and preserve them in spite of famine.”  As we absorb the lessons from these passages and desire to answer Jesus’ call to rise and leave ourselves, to follow Him without fear, we will want to sing this song as we go:  “LORD, let Your mercy be on us, as we place our trust in You.”

In the epistle, St. Paul is writing to Timothy, who was the bishop of the Church in Ephesus.  See how he combines both the truths that Jesus wanted to teach the apostles in Matthew 16-17.  He exhorts Timothy to “bear your share of hardship for the Gospel with the strength that comes from God.”  There is no avoidance of suffering for followers of Jesus.  However, St. Paul assures Timothy that God has a plan to lead us to glory (as revealed in the Transfiguration), a plan that existed “before time began.”  Yes, there will be hardship, but, in Christ Jesus, we know there is also victory over death, “life and immortality.”

Possible response:  Lord, you have loved me from “before time began.”  Why do I worry so much?