Feast of the Presentation of the Lord—February 2, 2014 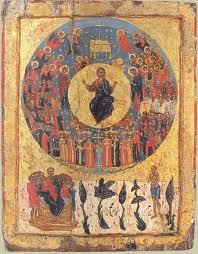 When Joseph and Mary took the infant Jesus to the Temple to fulfill Jewish law, they also fulfilled a treasured a Messianic prophecy.  How?

About a month after Jesus was born, His parents took Him to the Temple in Jerusalem to fulfill the law of Moses concerning firstborns (see Ex 13:1-3).  What was that law?  During the time of Israel’s deliverance from bondage in Egypt, God gave to His people, through Moses, an ordinance requiring that every firstborn child born to Hebrew parents must be “dedicated” to the Lord.  This requirement would constantly remind the Israelites of how all their firstborn children were spared from death by the blood of the Passover lambs on their doorposts.  They owed their existence as a nation to God’s supernatural protection of them.  The firstborn could be dedicated to God to serve as a priest or could be bought back with a modest redemption offering.

When Joseph and Mary arrived at the Temple, they were “amazed” at what greeted them there.  Simeon and Anna, a man and a woman who represented all the “righteous and devout” people of Israel were there actively, faithfully “awaiting the consolation of Israel.”  They recognized Jesus as the fulfillment of all their Messianic hope.  The Holy Spirit revealed to both of them that this ordinary-looking infant was anything but ordinary.  Simeon swept Jesus into his arms and spoke directly to God:  “Now, Master, You may let Your servant go in peace, according to Your word, for my eyes have seen Your salvation.”  God had promised this faithful man “that he should not see death before he had seen the Christ of the Lord.”  With the prompting of the Spirit, Simeon knew God had kept His promise in this Child.  He went on to prophetically describe the Child’s future.  Jesus would be both “a light for revelation to the Gentiles, and glory for [God’s] people, Israel.”

Then, speaking directly to Mary, Simeon describes a shadow that would accompany this Child’s life:  “Behold, this Child is destined for the fall and rise of many in Israel, and to be a sign that will be contradicted.”  The Child’s mission would stir up trouble and call for decisions that would create division and opposition.  What mother wants to hear that?  There was more, of course:  “You yourself a sword will pierce so that the thoughts of many hearts may be revealed.”  How difficult this must have been for a new mother, in her first public maternal action, to learn!  Suffering for both her Son and herself lay ahead.  In fact, Simeon was bringing together many Messianic prophecies in this amazing benediction over Jesus and His mother.  God’s long-promised salvation for the whole world was right here, lying as an infant in his arms, and Simeon says He will grow up to become the Suffering Servant of Isaiah’s majestic prophecies in the Old Testament. God had said even at the dawn of time in Eden, after the Fall, that a “woman” and her “seed” would take up the definitive battle against His primordial enemy, the devil (see Gn 3:15).  Simeon knew, in fulfillment of all that God had earlier revealed, that great pain and great glory lay ahead.

The prophetess, Anna, whom St. Luke identifies as “of the tribe of Asher,” is also prompted by the Spirit, after a faithful life of prayer and fasting, to recognize the Child as the One for whom “all who were waiting the redemption of Jerusalem” sought.  The tribe of Asher had been one of the ten northern tribes that were “lost” when the Assyrians conquered them in God’s just judgment against their covenant unfaithfulness.  She represents God’s intention to recover all that was lost to Him through sin.  Both Simeon and Anna saw in a tiny, newborn baby the hope of the whole world.

It is fitting that these prophetic announcements about Jesus were made in the Temple.  This was the place intended by God for the most intimate contact between Himself and His people.  It was the holiest place on earth, because it was where God visited His people on the Day of Atonement every year, in the liturgical work of the high priest.  Long before His earthly life unfolded, Jesus’ work as both priest and victim were foreshadowed in this Temple visit.  Jesus would return to the Temple, of course, at the beginning of His manhood and during the course of His public ministry.  Eventually, He would prophesy its utter destruction.  Why would that happen?  He was born to become the New and living Temple where, for all eternity, God and man would meet.

So many signs, so many wonders were present in this simple action by devout parents to obey God’s law for family life.  This gives us much to ponder, doesn’t it?

Possible response:  St. Joseph and St. Mary, please pray for parents today to be faithful in raising their children according to God’s Word.

Here is a dramatic prophecy from the very last of the Old Testament prophetic books.  When we read it, we can perhaps understand why devout Jews in Jesus’ day, like Simeon and Anna in our Gospel, spent so much time in the Jerusalem Temple.  God says, through His prophet, “Lo, I am sending My Messenger to prepare the way before Me; and suddenly there will come to the Temple the Lord whom you desire.”  This amazing prophecy goes on to say that when God’s “Messenger” appears, His work of “refining” and “purifying” God’s people means that “the sacrifice of Judah and Jerusalem will please the Lord, as in the days of old, as in years gone by.”  Jesus became the perfect sacrifice for sin, a sacrifice pleasing to God, because He offered Himself sinless, with a pure heart, out of love for sinners.

No wonder Simeon and Anna were waiting and hoping to see this “Messenger” with their own eyes.

Possible response:  Heavenly Father, thank You for sending Jesus to refine and purify Your people.  May the gratitude and joy of Simeon and Anna for this gift be ours today, too.

This psalm is traditionally ascribed to King David, written to celebrate the entrance of Israel’s recovered Ark of the Covenant to Jerusalem.  At that time, the Ark contained the stone tablets of the Ten Commandments, written by God’s own finger.  (By Jesus’ day, the Ark of the Covenant had been lost.)  King David recognized the presence of the true King of Israel in those tablets and the Ark itself.  Even though the Temple did not exist at this time (it was built later by David’s son, Solomon), the liturgy of the Day of Atonement, which included the sacrifice of one animal and the exile of the “scapegoat” to atone for the sins of the people, was celebrated in the presence of this Ark.  Its “mercy seat” served as the altar upon which the animal’s blood was placed.  So, as the Ark entered Jerusalem, David wanted to sing at the city gates, “Lift up, O gates, your lintels; reach up, you ancient portals, that the king of glory may come in!”  Today, because we know that Jesus is the New Temple, the Word of God in flesh and blood, not stone tablets, we can sing, “Who is this king of glory?  It is the Lord!”  Interestingly, on the day of Jesus’ Presentation in the Temple, not only did the New Temple visit His people but the New Ark of the Covenant, the one who carried God’s living Word in her womb, did, too.

Possible response:  The psalm is, itself, a response to our other readings.  Read it again carefully to make it your own.

Our epistle reading touches on so many themes we have already seen in our others readings.  Jesus, God’s flesh and blood “Messenger,” came to destroy the devil, who held all mankind in bondage to the fear of death.  This reminds us of Simeon’s prophecy of future suffering in store for the Child in his arms.  The “woman” and her “seed” were destined to do battle against God’s enemy.  Jesus took on our human nature and lived a human life like ours, made present in our Gospel when His parents, in simple human obedience to their religion, took Him to the Temple.  Jesus came to be the expiation of our sins, so that in Him we can now offer God a pure and pleasing sacrifice.  Lastly, Jesus is “able to help those who are being tested.”  He is not a Savior remote from us but One Who loves us, hears us, helps us.  This is why He is a “light” to the Gentiles and “the glory” of His people, Israel.

The baby of the Presentation grew up to be the King of all creation.  “Who is this king of glory?  It is the Lord!”

Possible response:  Lord Jesus, Simeon and Anna welcomed Your nearness in Your first Temple visit.  You are always near Your people.  Help us to live in the peace You want to give us.

One thought on “Feast of the Presentation of the Lord—February 2, 2014”