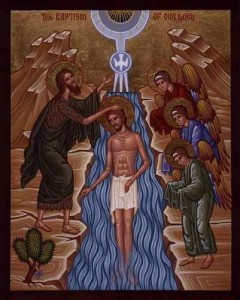 We know from the Gospel accounts that John the Baptist raised many Messianic expectations when he preached a baptism of repentance at the Jordan River.  Because of an Old Testament prophecy in the Book of Daniel, in which the angel Gabriel revealed a kind of “timetable” for the coming of the Messiah (see Dan 9), the people in Jesus’ day, knowing that the prophecy’s date had come due, were on high alert.  John’s charismatic presence and his clear prophetic vocation aroused suspicion that he might be the Lord’s “Anointed.”  John corrected them:  “I am baptizing you with water, but One mightier than I is coming” (Mt 3:11).  Why was John baptizing “with water”?  It was a long-standing element in Jewish purification rituals, for obvious reasons.  Water cleanses and purifies; it also sustains life.  Going all the way back to the Flood, the Jews knew that water figured prominently in salvation history.  By John’s day, going down into water and rising up out of it represented a sinner’s desire to turn from sin, be cleansed from its effects, and start fresh.  When Jesus appeared one day at the Jordan, why then did He take His place in line and submit to John’s baptism?  Why would God’s Son need to participate in a ritual like this?  Even the Baptist balked at this idea:  “John tried to prevent Him.”

In a most dramatic way, Jesus demonstrated that He did not come only to be human like us.  That was accomplished in the Incarnation.  No, He became flesh and blood so that He could step into the place of sinners and accomplish what John’s baptism only symbolized.  Water, all of its own, can’t wash away the ocean of human sin!  That could only happen with the death of sin itself, represented in baptism by the penitent’s disappearance under the surface of the water.  Sin’s consequences mean death; man’s rebellion against his Creator requires a just punishment.  When that requirement is satisfied, the penitent is free.  Jesus got baptized as His first public act of identification with man’s sin and His first step to defeat it, releasing all those held captive by it.  That, of course, would require Him to be submerged into death, into the grave, into the netherworld—the Cross.  His victory over those would be accomplished by His Resurrection; here it is symbolized by the opening of heaven and the descent of the Holy Spirit.  In the old order, death meant the end, a dissolution.  In the new order Jesus came to bring, death in the water of baptism means new life, a re-birth, a truly new and eternal start.

God spoke on the day of Jesus’ baptism:  “This is My beloved Son, with Whom I am well-pleased.”  All those re-born in the waters of baptism that Jesus has given to His Church receive this same expression of love and delight from our Father.  Jesus makes it possible for all of us to be born again into the relationship God originally intended for man and woman, blurred and distorted now by sin.  His baptism is not only with water but with “the Holy Spirit and fire.”  It wipes away sin and implants divine life in us.  John the Baptist knew his baptism could not accomplish that!  In humility, he acknowledges this:  “I need to be baptized by You, and yet You are coming to me?”  Still, God allowed him to participate in the first public act of the Messiah for Whom he worked so tirelessly to prepare.  What a blessed day that must have been for him.

Possible response:  Lord Jesus, thank You for being willing to identify with my sins and failures.  Help me to live each day in the newness of life You have made possible in baptism.

God, through the prophet, Isaiah, foretold that someday His “servant … My chosen one with Whom I am well-pleased” would appear within human history.  The description of this Servant was fulfilled most wonderfully in Jesus, Who began His public ministry on the day of his Baptism.  He was tender and caring with those on the fringes of Jewish society (the bruised reeds and the smoldering wicks), whether because of illness, poverty, or sin.  He worked to be a light to the blind of all nations, not just the Jews.  It was a quiet work, often done in out-of-the-way places, in homes, on the side of a hill, or from a boat.  It was most fitting that on the day of His Baptism, God used the words of this prophecy (“My chosen One with Whom I am well-pleased”) to confirm that Jesus was the long-expected Messiah, Who would “bring forth justice to the nations.”  He came to set the prisoners free.

Possible response:  Heavenly Father, thank You for sending Your Servant, Jesus, to rescue all of us from sin.  Teach me to listen for His quiet voice today.

The psalmist calls us to “give the Lord glory and praise.”  When we think about the work Jesus came to do for us, beginning with His Baptism, that’s exactly what we want to do!  We know that because Jesus was willing to die for sinners, “The Lord will bless His people with peace.”  See how the psalmist says, “The voice of the Lord is over the waters.”  We know that at Creation, the Spirit of God hovered over the face of the waters as God spoke the earth and its inhabitants into being (see Gen 1:2).  Our Gospel tells us that God spoke over the waters of Jesus’ Baptism; once again the Spirit moved “over the water,” this time to bring forth new life for man through Jesus, to be administered through our own baptism.  This should move us to sing with the psalmist, “Give to the Lord the glory due His Name.

Here we have an account of the sermon St. Peter preached to the Gentile, Cornelius, and “all those gathered in the house of Cornelius.”  By a vision and with angelic direction, St. Peter was sent to this God-fearing non-Jew in order to begin to fulfill the long-standing prophecies that the Messiah would be a light to “all the nations.”  St. Peter declares that “God shows no partiality.”  As St. Peter describes the ministry of Jesus to Cornelius and the others, we see that he locates the beginning of this work on the day we are celebrating liturgically today, the Baptism of the Lord, when “God anointed Jesus of Nazareth with the Holy Spirit and with power.”  As of that day, “He went about doing good and healing all those oppressed by the devil, for God was with Him.”  Through baptism in the Name of the Father, the Son, and the Holy Spirit (all three of Whom are mentioned here), the Church has offered this same liberation for over 2000 years.  God is still proclaiming “peace through Jesus.”  He is still welcoming all those re-born in the waters of baptism as His beloved children with whom He is “well-pleased.”

Possible response:  Heavenly Father, please help me to live as a child with whom You are “well-pleased,” trusting Your Son and accepting His gift of salvation.