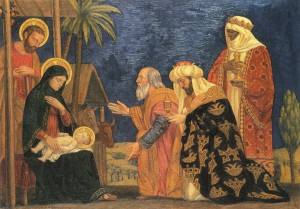 In today’s Gospel, magi “from the east” ask, “Where is the newborn king of the Jews?”  Just by asking this question, they herald the New Light that has dawned on all men.

Today, St. Matthew tells us that after Jesus’ birth, an event loaded with significance for the whole world took place.  “Magi from the east arrived in Jerusalem,” looking for a king who had been recently born, the “king of the Jews.”  Who were these men, and why did they ask this question?

The “magi” were likely astrologers, considered at that time to be “wise men” because of their lifelong commitment to studying the skies and finding meaning in the cosmos.  They probably came from Persia, and they possibly were part of a school of wise men over which the Jewish prophet, Daniel, had been given authority hundreds of years earlier.  Daniel, as a young man, had been carried off by the Babylonians into exile, along with all the other Jews.   This was the punishment God meted out to Judah for her covenant infidelity in the sixth century B.C.  In that strange, pagan land, Daniel resolutely kept the faith of Israel, trusting in God as his only king and refusing to participate in the rampant idolatry.  God called Daniel to be His prophet there, and He also gave him an extraordinary gift of interpreting dreams and visions.  Daniel interpreted one of King Nebuchadnezzar’s dreams that no one else in the realm could understand.  In gratitude, the king made Daniel “chief prefect over all the wise men of Babylon” (read Dan 2:48).  If this school of wise men endured through the centuries (Daniel never returned to Judah), it was still in existence at the time of our story, although Babylon had long ago been conquered by the Persians.  The school would likely have preserved a certain Jewish prophecy that would have been well-known to Daniel and of great interest to astrologers.  Why?

During the Exodus (about 1500 B.C.), as Israel was making her way back to the Promised Land from bondage in Egypt, one of the kings who felt threatened by their advance commissioned a “seer” to pronounce a curse on the Israelites.  Instead, he was moved by God to bless them, and he was given “the vision of the Almighty,” as well as this prophecy:  “I see Him, but not now; I behold Him, but not nigh:  a star shall come forth out of Jacob, and a scepter shall rise out of Israel” (read Num 24:17).  Here we have a Gentile prophet moved by God’s Spirit to foretell the rise of a great king in Israel, but “not now.”  Every Jew knew this prophecy.  Every Jew also knew that, of Jacob’s twelve sons, the one who would rule with a “scepter” would be Judah:  “The scepter shall not depart from Judah, nor the ruler’s staff from between his feet, until he comes to whom it belongs, and to him shall be the obedience of all the peoples” (read Gen 49:10, emphasis added).

We have to wonder if Daniel, the fearless, faithful Jewish prophet and wise man in Babylon, made sure to preserve these prophecies in the school over which he presided, because their fulfillment would affect not only Israel but “all the peoples.”  If so, hundreds of years after Daniel lived, the magi from the east, upon seeing an unusually bright star in the night sky, knew they needed to make the long trek to Jerusalem.  They wanted to pay homage to their newborn king.

See how disturbed Herod was by all this.  Surely that is because another part of the prophecy about the rising star was that “Edom will be dispossessed” (Num 24:18).  Herod was a non-Jew, an Edomite usurper to the throne in Jerusalem.  No wonder he was worried!  The wise men of Judah, when consulted by Herod concerning the place of the king’s birth, knew where to find him:  Bethlehem.  This, too, had been prophesied long ago (read Micah 5:2).  The magi made their way there, following the star.  It appeared to “stop” over one particular house, so they entered and saw “the Child with Mary, His mother.”  They saw the fulfillment of the promise God had made to all people, not just the Jews, in the Garden of Eden.  There He promised that “the woman” and her “seed” would take up, definitively, the battle waged against mankind by His enemy, the Serpent.  The magi “prostrated themselves and did Him homage.”

Of course they did!

Possible response:  Lord Jesus, the magi brought You wonderful gifts in their adoration for You.  What can I give You today that is worthy to do the same?

The prophet, Isaiah, had to preach God’s judgment against Judah for her disobedience to Him, but he also preached great comfort to them as well.  Here he speaks of a future glory in Jerusalem:  “Rise up in splendor, Jerusalem!  Your light has come, the glory of the LORD shines upon you.”  We see that the “light” is the LORD Himself, and, to announce its coming, Isaiah says to the city:  “Upon you the LORD shines, and over you appears His glory.”  Such was the light of the star seen and followed by the magi.  Isaiah also foresees a time when “the wealth of the nations shall be brought” to Jerusalem; men from outside Judah shall “come bearing gold and frankincense and proclaiming the praises of the LORD.”  Israel’s vocation had always been to serve as a “kingdom of priests” (read Ex 19:6).  He chose them for the work of declaring His glory to all the nations on earth.  Their constant disobedience prevented them from fulfilling this calling for much of their history, but Isaiah sees a time when Jerusalem “shall be radiant at what you see, your heart shall throb and overflow.”  Surely this description perfectly fits what must have happened in that house in Bethlehem when the magi, under the star’s great brightness over it, entered and presented theirs gifts to their infant King.  God’s restoration of Jerusalem, promised through Isaiah 700 years earlier, was now being fulfilled.

“Rise up in splendor, Jerusalem.  Your light has come.”

Possible response:  Lord Jesus, grant me the perseverance of the magi to search out and follow Your light when darkness surrounds me.

The psalmist writes about, prophetically, the consummate King of Israel.  King David was the man God chose to establish an enduring throne in Jerusalem.  David was “a man after God’s own heart,” but although he led Israel to a kind of golden age in its history, he was only a foreshadowing of the king described in this psalm.  This king is one who rules in justice and peace, who rescues the poor and has pity on the lowly.  This king will receive tributes from other nations and “all kings shall pay him homage.”

The magi, representing all the nations and kings outside Judah, found this king in Bethlehem.  This king would preside over an eternal kingdom “not of this world.”  This king rules now over His kingdom, the Church, which includes people from every nation and tongue.  Someday, when this king returns, what we say in our responsorial today will find its perfect fulfillment:  “LORD, every nation on earth will adore You.”

St. Paul speaks of what, in his day, was truly a “mystery” to his people, the Jews.  In Israel’s long history, she had been so weak in the face of the temptation to the idolatry practiced by Gentiles that those who desired to remain faithful to God kept strict separation from them.  Even though Israel’s vocation had always been to mediate as priests between God and all other peoples, by St. Paul’s day, the Gentiles seemed like their enemies.  However, with the coming of Jesus, all that changed.  With their true king on His throne, salvation went out to all men everywhere, and St. Paul preached this Good News with gusto:  “The Gentiles are coheirs, members of the same body, and copartners in Christ Jesus through the Gospel.”

The magi in Bethlehem, as they adored their new king, were the first Gentiles to experience the unfolding of this great mystery, and St. Paul, many years later, became its first great evangelist.

Possible response:  Heavenly Father, thank You for Your love for all people everywhere, even those who seem like Your enemies.  Help me love them, too.