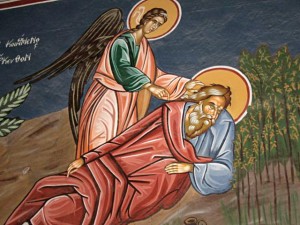 On this last Sunday of Advent, our Gospel calls us to reflect on Joseph, not Mary or Jesus.  Why?

As our time of preparation and waiting in Advent draws to a close, we find ourselves listening to St. Matthew’s account of how Joseph became an important part of the first Advent.  In some ways, the example of Joseph is the perfect pivot point as move from anticipation to reality in the Incarnation, celebrated all through the liturgical season of Christmas.  How?

St. Matthew tells us that “Mary was betrothed to Joseph, but before they lived together, she was found with child through the Holy Spirit.”  There is so much we would like to know about how this came about!  Did Mary try to explain to Joseph the impossible story of the Annunciation?  Or did she, instead, keep the  explanation to herself and simply acknowledge to Joseph that she was “with child”?  We don’t know for sure.  What we do know is that Mary’s pregnancy presented a challenge to Joseph, her betrothed husband.  In that day, betrothal was a binding legal relationship, like marriage, even before the couple lived together to consummate it.  A betrothal could only be ended by death or divorce.  Joseph was a “righteous man.”  He decided to “divorce her quietly” so that she would be spared public exposure.  Why did Joseph believe he had to divorce Mary?  One possibility is that although Joseph thought this mysterious pregnancy meant Mary had been unfaithful, he still loved her too much to cause her humiliation.  Another possibility is that Joseph understood that the mysterious pregnancy of his devout betrothed (remember, even an archangel addressed her as “full of grace”) made it highly unsuitable for him to marry her.  Even if Mary had not explained the cause of her pregnancy at all, her devout life would have convinced Joseph that something very magnificent was underway in her.  For that reason, he would not be able to take her into his home, out of simple reverence, but he must do all that he could to spare her any shame.  This latter scenario fits the details we do have better, but, either way, what a dilemma!

Joseph was not left alone to work this out:  “The angel of the Lord appeared to him in a dream.”  Now we see that as the Incarnation began with an angelic visit, it would now proceed with another one.   The angel addresses Joseph as, “Son of David.” At the Annunciation, the angel’s greeting to Mary was full of prophetic meaning; this greeting, too, brings into focus the glorious promise of God that the Messiah would be of the house of David.  Joseph stood in this line of kings, very distant by his own day.  As the angel continues, it is clear that Joseph is meant to father the Child in Mary’s womb:  “Do not be afraid to take Mary into your home.”  Again, we aren’t entirely sure why Joseph feared to continue with their betrothal.  Either he suspected Mary and her story, or he so respected her that he thought she should be God’s spouse alone and that he was not worthy to take her in marriage.  The angel assures him there is no need for fear, because Joseph has a role to fulfill in God’s ancient plan for man’s salvation.  We don’t know precisely what caused Joseph’s fear, but we know he had to resist it and welcome the Child and His Mother into his home, bestowing on Him the royal lineage of David.  Joseph would be charged with naming the boy, a traditional privilege of fatherhood.  His willingness to do this would help fulfill what God had said long ago through the prophet, Isaiah:  “Behold, the virgin shall conceive a son, and they shall name Him Emmanuel” (emphasis added).

When Joseph awoke, was he thinking about this Scripture from Isaiah, which he had undoubtedly heard many times in his life?  Did he think about how the prophecy described a virgin giving birth but “they” would name him?  Did he start to understand that his obedience of faith would bring the “they” (and not just “she”) to pass?  Was there an awful lot he just didn’t understand?  Nevertheless, in spite of any misgivings he might have had, “he did as the angel of the Lord had commanded him.”  By faith, he received the Child and His Mother and became part of their family.

Perhaps this is why it is Joseph we meet on the last Sunday in Advent.  Aren’t we, too, now asked to receive the Child and His Mother in a fresh and loving way?  Aren’t we, too, asked to give the obedience of faith to believe that no matter what our misgivings might be, or how they arise, we are meant to join that Family?

St. Joseph, pray for us.

Possible response:  Heavenly Father, St. Joseph’s willingness to do something that must have seemed quite difficult is exactly the kind of example I need nearly every hour in my life with You.

We turn now from Joseph’s example of the obedience of faith to King Ahaz’s example of the disobedience of lack of faith that took place about 700 B.C.  In this episode, the very weak Ahaz, king of Judah, had been plotting to form an alliance with pagan nations to protect against military conquest.  God told him not to do this—God never wanted His people to look for help from pagan nations.  They needed to call upon Him alone.  The Lord sent Isaiah to Ahaz with a command:  “Ask for a sign from the Lord your God; let it be as deep as the nether world, or high as the sky.”  In other words, God told Ahaz to ask for such an otherworldly sign to prove God’s instruction against alliances was the one to follow that, when granted, it would demonstrate beyond a shadow of a doubt that He was trustworthy.  Unfortunately, the crafty Ahaz didn’t want to be convinced that God’s plan was the right path for him; he liked his own plan.  So, in false piety, he declines to ask for that kind of sign:  “I will not tempt the Lord.”  We can just about see Isaiah rolling his eyes at this point:  “Is it not enough for you to weary people, must you also weary my God?”  Isaiah knew what was behind this coy sham.

Not to be thwarted by Ahaz, the Lord Himself gave a sign, and what a sign it was!  We are still celebrating it:  “The virgin shall conceive, and bear a son, and shall name him Emmanuel.”  This will be the sign that our salvation, our victory over our enemies (sin, death, the devil) will come through God alone.  “Emmanuel” means “God is with us.”  This name is actually a description of the Incarnation.  The name, Jesus, given to both Joseph and Mary to be the Name of God’s Son, means “Savior.”  How appropriate!  Ahaz resisted the obedience of faith to try to save himself and his people.  Joseph and Mary gave God the obedience of faith and welcomed the only Savior men will ever know—God-with-us, Emmanuel.

Possible response:  Heavenly Father, thank You for making and keeping this promise to show us that our help—our salvation—is in You alone.

This psalm helps us get ready to leave Advent and welcome Christmas.  It sings of the glory of God’s possession of “the earth and its fullness, the world and those who dwell in it.”  God and man were always meant to dwell together (remember the Garden of Eden), but disobedience that comes from lack of faith separated them:  “Who can ascend the mountain of the Lord or who may stand in His holy place?  One whose hands are sinless, whose heart is clean.”  This is our Jesus!  Soon, He comes to show “the face of God” to those who seek Him, and that would be us.  After our Advent preparation, we are ready to sing, “Let the Lord enter; He is king of glory.”

St. Paul, in writing to the Church in Rome, scoops together many of the themes we have seen in our other readings.  He acknowledges that Jesus, Son of David, is the fulfillment of God’s promises made so long ago.  He knows that because of what Jesus has done for us, there is Good News, the Gospel, to be preached throughout the world.  See how St. Paul’s apostleship, a grace from God, commissioned him to call Jews and Gentiles alike (in other words, everyone) to the “obedience of faith.”  We, too, are “called to be holy,” as were Mary and Joseph.  Jesus comes to make that possible.  He brings us “grace” and “peace.”

Has Advent made us willing to offer to our God the obedience of faith with renewed vigor in this new liturgical year?

Possible response:  Heavenly Father, I know the greatest and only gift I can give You is my faith.  Help me live that faith better in the year ahead.