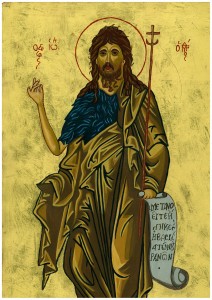 John the Baptist prepared the Jews for the first Advent of Jesus by baptizing at the Jordan River.  Today, we find him yelling out, “You brood of vipers!” to some who came to see him.  How indelicate!

Our Advent Gospel reminds us that repentance and the fruit that comes from a changed life are vital to our preparation for the Lord’s coming.  John the Baptist fulfilled Isaiah’s ancient prophecy that “the voice of one crying out in the desert” would “prepare the way of the Lord” (Isa 40:3).  The preparation consisted of one word:  “Repent!”  People flocked to hear John—from “Jerusalem, all Judea, and the whole region around the Jordan.”  When they heard his fierce preaching, they “acknowledged their sins” and were baptized.  St. Matthew tells us that “many of the Pharisees and Sadducees” came to his baptism.  These were the religious elites among the clergy and Temple officials (the Sadducees), as well as the laity (the Pharisees), in Jerusalem.  We might expect John to give them a warm welcome.

Not so.  He called out, “You brood of vipers!  Who warned you to flee from the coming wrath?”  Why was John so provoked by their appearance at the river?  We know, from the rest of the Gospel story, that these religious elites were Jesus’ harshest critics.  They were also very suspicious of John; they stubbornly resisted acknowledging that he was a prophet sent from God.  How did they get to be this way?  They had so perverted the religion of the Jews with their hypocrisy and power-mongering that their hearts were very hard.  They provoked Jesus, too, when He once lashed out at them:  “You serpents, you brood of vipers, how are you to escape being sentenced to hell?” (Mt 23:33)  At the Jordan River, John warned them against cheap religion (“produce good fruit as evidence of your repentance”) and presumption (“do not … say to yourselves, ‘We have Abraham as our father’”).  John told them that the One for Whom he was preparing, the One Who was coming after him, would baptize with “the Holy Spirit and with fire.”  The fire of God’s love, the Holy Spirit, would be unleashed by Jesus on the earth.  To the repentant, He is the fire of purification and, ultimately, glory.  To the hard-hearted, He is the fire that burns up the chaff and destroys it.  It is worth noting that even though the religious elites were in great danger, John did not think they were beyond saving, but they did need the strong medicine of his strong words.

Is this really a message we need to hear today?  Is John’s call to the Jews of his day to true repentance, with the good fruit it produces, still relevant to us?  Advent reminds the whole Church that we are still waiting for another coming of Jesus.   His first Advent is recorded in Scripture for us so that we will know what to do with ourselves as we await His second Advent.  Those of us who take our religious lives seriously, both clergy and laity, should be very attentive to the unique temptations we face in this time of waiting:  hypocrisy, power-mongering, presumption.  We can never hear the call to prepare for the Lord too often.

Possible response:  Lord Jesus, I often think of this time before Christmas as jolly and festive.  Help me remember that Advent’s liturgical color of purple means it’s a time for repentance and preparation, too.

In our Gospel, John the Baptist spoke of the “One Who is coming after me” as so mighty that he thought himself “not worthy to carry His sandals.”  Here, Isaiah’s prophecy helps us understand why John, who knew Isaiah’s words inside and out, described Jesus that way.  Isaiah looks forward to a day when “a shoot shall sprout from the stump of Jesse, and from his roots a bud shall blossom.”  Jesse was the father of King David, and, as we know, Jesus was the Son of David.  Isaiah goes on to give us beautifully vivid details about this “shoot from the stump of Jesse.”  We recognize Jesus in all these marvelous images.  In them, we understand that Jesus will reign over a kingdom of peace, harmony, and justice.  This promise of future glory is summed up when God says, through Isaiah, “There shall be no harm or ruin on all My holy mountain; for the earth shall be filled with knowledge of the Lord.”  Isaiah also foresaw that the “root of Jesse” would rule over a kingdom that far exceeded the physical boundaries of Israel, for He would be “a signal for the nations” that even “the Gentiles shall seek out.”

Jesus began His reign over this kingdom when He ascended to His throne in heaven after His Resurrection.  His kingdom is firmly planted in this world, although it is not of this world.  We are now, as Advent reminds us, waiting for the return of our King.  That being so, our best preparation is to be people of peace, harmony, and justice—in our relationship with God and others—right now, today.  If we do this with energy, we can face down deadly temptation to hypocrisy, power-mongering, and presumption.

Possible response:  Heavenly Father, if I concentrated just on being a person of peace, harmony, and justice during this Advent, I would have a lot to think about and even more to change in me.

During Advent, it is good to sing a psalm like this one, because it is so full of praise for the glorious kingdom Jesus has established already, in His Church, and for its manifestation to all at His Second Coming, for which we wait.  Just as Isaiah prophesied, in this kingdom, “Justice shall flourish in His time, and fullness of peace for ever.”  We can see that in this kingdom, it is not the powerful or the presumptuous who are saved; rather, it is “the poor when he cries out, and the afflicted when he has no one to help him.  He shall have pity for the lowly and the poor; the lives of the poor He shall save.”

Recall that in our Gospel, we might have wondered if John the Baptist’s insistence on true repentance as preparation for the Advent of Jesus is still relevant.  St. Paul answers that question for us:  “Whatever was written previously was written for our instruction, that by endurance and by the encouragement of the Scriptures, we might have hope.”  So, the answer to our question is, “yes!”  John the Baptist can help us, today, prepare for the coming of the One for Whom we all long.  See that St. Paul understood that the kingdom Jesus came to establish has already taken root:  “Think in harmony with one another … welcome one another … as Christ welcome you.”  His is a kingdom of peace and harmony.  St. Paul knows Jesus’ kingdom of justice, showing no partiality, is meant for all mankind:  “Christ became a minister of the circumcised to show God’s truthfulness, to confirm the promises to the patriarchs, but so the Gentiles might glorify God for His mercy.”

All God’s promises, no matter how long ago they were made, are being fulfilled.  Jesus does, indeed, intend to come back to this world in His Second Advent.  Therefore, as St. Paul urges, let us “with one voice glorify the God and Father of our Lord Jesus Christ,” and let us be prepared.

Possible response:  St. Paul, pray for the Church on earth to manifest the beautiful signs of the kingdom Jesus won for us—peace, harmony, justice—so that those now in the kingdom of darkness will seek its light.