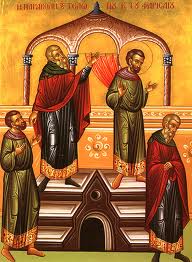 Today, Jesus tells a story about two men praying in the Temple; one is seriously religious, the other a serious sinner.  What can they teach us?

St. Luke, in reporting one of Jesus’ parables, explains its meaning before we actually read it:  “Jesus addressed this parable to those who were convinced of their own righteousness and despised everyone else.”  So, we know this will be a story about human pride and how it can lead to contempt for others.  This sounds like a terribly ugly affliction.  We may already start to think of people we know to whom it might apply.  Yet, there are some surprises in this parable, and we would do well to give it our close attention.

One of the men praying in the Temple was a Pharisee.  Who were the Pharisees?  The Ignatius Catholic Study Bible can help us understand them better (pg 69):

“Although not Israel’s official teachers or leaders, the Pharisees were popular and held great sway with the masses.  They were deeply concerned with the cultural and religious crisis of the day:  How does one live as a faithful Jew in a land that is ruled and occupied by pagans (Romans)?  The Pharisees’ answer:  Israel must separate itself from all Gentile impurity and defilement, since only in this way will God rescue His people from the clutches of Rome.  Even their name, which means “separated ones,” underscores their national agenda.  The Pharisees gave considerable attention to ritual purity, insisting that even laymen should maintain a high level of priest-like holiness in their personal lives.  Scrupulous observance of Jewish laws (circumcision, the Sabbath day, food laws, tithing, etc.) meant the Pharisees could proudly assert their identity in the midst of their Gentile neighbors.  This background inevitably led to a clash between the Pharisees and Jesus.  They tried to insulate Israel from the Gentiles, while Jesus was reaching out to embrace all the nations with God’s mercy.  The Pharisees were religious isolationists; Jesus’ proclamation of God’s kingdom was open and inclusive.”

How does this seriously religious man pray in the Temple—a man devoted to preserving the ritual purity of God’s covenant people?  First, Jesus tells us that he prayed “to himself.”  How odd!  His visit to the Temple to pray was not meant to actually address God, although it began with the words, “O God.”  He did not make any kind of appeal to God.  Even when he expressed gratitude (“I thank You”), it was not thanksgiving for anything in or from God.  Instead, the Pharisee was thankful that he was “not like the rest of humanity.”  He was not “greedy, dishonest, or adulterous.”  In other words, he practiced virtue, not like “this tax collector.”  He went on to describe his impressive religious observances—fasting twice a week and paying tithes on his whole income.  This is sobering, isn’t it?  Here is a religious man who cares deeply about the rules God had given His people, practicing them without fail, but to what has all that led?  In his own eyes, he is perfect; he is not a sinner “like the rest of humanity.”

What about the tax collector, the serious sinner?  The Pharisees despised tax collectors for several reasons:  (1) Collecting revenue involved frequent contact with Gentile sinners (2) Since taxes were collected for the Romans, Jewish tax collectors were branded as traitors (3) Collectors were often guilty of extorting personal commissions above the tax amount.  No wonder the “tax collector stood off at a distance.”  He was truly an outcast among his people, but he went to the Temple anyway.  Why would he be willing to subject himself to the contempt he was sure to face there?  This sinner braved it because he wanted to talk to God.  No matter what others might think of him, all he cared about was what God thought of him.  We can tell by his body language what was in his mind and heart, before we hear his prayer:  “[He] would not even raise his eyes to heaven but beat his breast.”  Here is a man convinced of his sin and his great need of God’s mercy:   “O God, be merciful to me a sinner.”  His prayer was much shorter than the Pharisee’s prayer.  Which one was most effective?

Jesus tells us the tax collector went home “justified” (his sins were forgiven), not the Pharisee.  Why was the outcast the one who experienced God’s mercy and not the religious man?  Jesus explains:  “Whoever exalts himself will be humbled, and the one who humbles himself will be exalted.”  The warning against self-exaltation is a constant theme in Jesus’ teaching (see Mt 18:4, 23:12; Lk 14:11; 1 Pet 5:6).  The tax collector asked for God’s mercy and got it; the Pharisee didn’t think he needed it, so he didn’t bother to ask.

The paradoxical, uncomfortable truth is that we religious people are highly susceptible to self-exaltation, especially in our own day.  Many of us believe ourselves to be involved in a “culture war” similar to the one the Pharisees struggled against.  Sometimes in our campaigns to preserve morality in our laws and societal norms, we can become self-righteous.  We despise sinners, forgetting that we, too, are sinners in great need of God’s mercy.  This parable serves as a warning to people like us, who are conscientious enough in our religious lives to write or read commentary on lectionary readings.  In our prayers, our pious practices, and our participation in Mass, are we more aware of the sins of others than our own?  Do we make the sinners around us feel ostracized and judged?  Are we willing to beat our breasts and cry out for God’s mercy, knowing how needy we are?  Whose prayer sounds most like ours—the Pharisee’s or the tax collector’s?

Possible response:  Lord Jesus, forgive me for the times I have looked down on those whose sins are more obvious than my own.

This reading from Sirach helps us understand why the prayer of the tax collector in our Gospel resulted in his justification, while the Pharisee left the Temple unchanged:  “The Lord is a God of justice, Who knows no favorites.”  Although the religious man had much about which to brag, it was the tax collector’s heartfelt cry for mercy that was heard in Heaven:  “The prayer of the lowly pierces the clouds; it does not rest till it teaches its goal, nor will it withdraw till the Most High responds.”  We can never be the judge of other people’s hearts, but only of our own, confident that God “judges justly and affirms the right.”

Possible response:  Heavenly Father, I thank You that You always hear the prayers of the humble, of those who know You are our only hope in life.

There is great comfort for us in this psalm, if we keep ourselves in the posture of lowliness.  We are reminded of the Blessed Virgin Mary’s response to being chosen as the mother of God’s Son (a reason to brag if ever there was one):  “[God] has looked with favor on His lowly servant” (Lk 1:48).  The psalm assures us that when we count ourselves as lowly, brokenhearted, or crushed in spirit (this was the tax collector’s prayer posture in the Temple), God hears, and from all our distress He rescues us.  How much better it is for us to think of ourselves as poor in spirit, as described by Jesus in the beatitudes.  When we pray from this kind of poverty, we can affirm, with joy and gratitude, “The Lord hears the cry of the poor.”

In this reading, we have an interesting interplay between what could, at first glance, look like the spiritual pride of the Pharisee in our Gospel, and the humility of the tax collector, all in one person—St. Paul.  This letter was probably written during St. Paul’s final imprisonment, right before his martyrdom, when he was “poured out like a libation,” or sacrifice, for his testimony to Jesus.  He tells St. Timothy, “I have competed well; I have finished the race; I have kept the faith.”  Is this the same kind of bragging we saw in the Pharisee?  It might be, if we didn’t read on.  We can see St. Paul’s utter dependence on the Lord, at the very end of his life, to give him “the crown of righteousness” that is destined for “all who have longed for His appearance.”  St. Paul does not single himself out for special treatment; the crown he anticipates isn’t a crown for his own righteousness.  All who hope in Jesus will receive God’s own righteousness as reward for their faith and faithfulness.  In addition, we see that when others, his Christian friends, deserted him during his trial before a Roman court, he begged that it “not be held against them.”  In this, he shows the mercy Jesus showed to the sinners who crucified Him.  There is no contempt for sinners here.  St. Paul acknowledges that it was God’s work in and through him that made all the difference.  It is this humility—believing that anything good in us comes from God, not ourselves—that enables God, in the end, to exalt us and bring us “safe to His heavenly kingdom.”  So, St. Paul, filled with this kind of humility, ends his epistle with these words:  “To Him be glory forever and ever.  Amen.”  Yes, St. Paul, amen.

Possible response:  St. Paul, please pray for me to remember that anything good in me comes from the Father.  I have no reason to boast.

One thought on “Thirtieth Sunday in Ordinary Time—October 27, 2013”