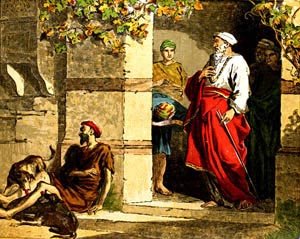 Last Sunday’s Gospel ended with a warning from Jesus:  “You cannot serve both God and mammon.”   Today we read about a man who thought he could.

St. Luke told us in last Sunday’s reading that Jesus had some bracing words to say about money to the Pharisees who gathered to hear Him.  However, St. Luke tells us “The Pharisees, who were lovers of money, … scoffed at Him” (16:14).  Perhaps because of this hardness of heart, Jesus tells them yet another story.  He gives them another opportunity to hear the truth.

Jesus begins His story with, “There was a rich man.”  There can be no missing that this parable is intended for men who were “lovers of money.”  They should be all ears.  The rich man lived like a king, with fine clothing and sumptuous feasting “every day.”  We should remember that in Jesus’ day, the Jews thought that wealth was a sign of God’s blessing; likewise, poverty and adversity must be a sign of God’s disapproval.  There was a poor, sick man, Lazarus, who lay at the rich man’s door.  Why was he lying there?  Was he too sick and weak to do anything else?  Was he hoping that by positioning himself in such an obvious spot—the door—he would stand a much better chance of being seen by the rich man and receiving some help from him?

It is worth noting that this poor, sick man has a name—Lazarus.  He is the only person in any of Jesus’ parables to be named.  In Hebrew, his name means “God is my help.”  What a name!  He is poor and sick, but he has the dignity of a name.  He is an icon of all the poor of human history who have chosen to put their faith in God.   They trust Him to save them even in all their terrible adversity.  Perhaps this is why Lazarus is described as one “who would gladly have eaten his fill of the scraps that fell from the rich man’s table.”  We do not find him bitterly ranting against the rich man.  There is no resentful demand for justice and redistribution of wealth.  No, Lazarus knew that God was his true help in life, and He could be trusted.  His fate did not depend on this indifferent rich man.

“When the poor man died, he was carried away by the angels to the bosom of Abraham.”  His faith in God, Who was his help, was well rewarded.  The rich man died, too, but he went to the netherworld, a place of torment.  How surprised the Pharisees listening to Jesus must have been to hear this reversal in the story.  The rich man, seeing Abraham and Lazarus by his side, cried out for the kind of mercy he had never been willing to show the poor man on his doorstep.  Abraham reminded him that he had “received what was good” in his lifetime (and had never shared it).  Lazarus had received “what was bad” (and had never lost his faith in God).  Now, the tables are turned.  Of course, this kind of reversal is one of the bedrock truths about human existence that Jesus taught the crowds who followed Him at the very beginning of His ministry.  Recall that the Sermon on the Mount begins with the beatitudes (see Mt 5:1-12).  In each of them, Jesus makes clear how foolish it is to live for only what we can see and grasp in this life; our time here is really a preparation for eternity (i.e., “Blessed are the poor in spirit, for theirs is the kingdom of heaven”).  The rich man found himself in Hades, not because he was rich, but because he had lost this perspective.

Abraham explains why he can’t grant the rich man’s request for help:  “Between us and you a great chasm is established to prevent anyone from crossing who might wish to go from our side to yours or from your side to ours.”  What does this mean?  A note from the Ignatius Catholic Study Bible (pgs 138-139) will help:

“Hades (the netherworld or realm of the dead) refers to a waiting place where the deceased souls of the wicked are retained until the Last Judgment (Rev 20:13).  Here it stands opposite Abraham’s presence, where the righteous souls of the Old Testament era waited patiently for Christ to open the gates of heaven (Eph. 4:8-10).  The sinners languish in the grip of torment.  It is separated from the abode of the righteous by a permanent, unbridgeable gulf that permits no traffic to pass between them (see CCC 633).”

The rich man then pleads for Lazarus to warn his brothers to avoid “this place of torment.”  Because the rich man is in the place of the wicked, we must presume that this request doesn’t come from mercy, because he had none.  Most likely it was pride in his family’s name and reputation that made him want his brothers to avoid torment.  Notice that his concern was not that his brothers learn to love God and live charitably with their neighbors, as instructed by the Law of Moses.  It was only that they avoid torment.

Abraham wisely answered:  “They have Moses and the prophets.  Let them listen to them.”  Had the rich man simply lived the law of love of God and neighbor, the heart of the covenant God had made with His people through Moses and preached by all the prophets sent to them when they didn’t, he would have found himself in the bosom of Abraham, too.  He had, sadly, been deaf to that law.  Now, however, he is convinced that “if someone from the dead goes to them, they will repent.”  Abraham knew better:  “If they will not listen to Moses and the prophets, neither will they be persuaded if someone should rise from the dead.”  These are prophetic words, of course.  In the first instance, when Jesus raised another man named Lazarus, from the dead, it only further hardened the hearts of those who had rejected Jesus as Israel’s Messiah.  The religious elites sought to put both Jesus and Lazarus to death as a result (see Jn 11:45-53; 12:9-11).  After Jesus’ Resurrection, the apostles preached the Gospel to the Jews in Jerusalem, Judea, and Samaria.  Again, the religious elites rejected it.  Even the miracle of resurrection cannot change a heart that has fully hardened itself against listening to God.

The message Jesus had for the “lovers of money” was simple:  Don’t let money blind you to those in need.  Use your gift of wealth to love God will all your heart and your neighbor as yourself.  What we choose in this life will be what we receive in the next.  If we choose ourselves, we get only ourselves.  If we choose to believe that “God is my help,” we get Him!

Possible response:  Lord Jesus, help me keep my eyes open to see my neighbor who might need my help today.

Amos was a prophet who lived in the 8th century B.C.  He was sent by God to warn the rich and disobedient in Israel, the ten northern tribes that had broken away from the royal throne of David.  In vivid language he describes their self-indulgence, yet “they are not made ill by the collapse of Joseph.”  In other words, they were completely indifferent to the fact that they and their fellow Jews had lost the faith, violated the covenant, and stood on the brink of destruction.  Their luxuries had blinded them to the tragic spiritual state of their souls and their nation.  They lived only for themselves.  Consequently, the Lord vowed that “they shall be the first to go into exile, and their wanton revelry shall be done away with.”  They would, in God’s just judgment, lose everything but themselves—the very definition of hell.

Possible response:  Heavenly Father, I live in a culture that loves luxury and self-indulgence.  Strengthen me against its taint.

This psalm reveals the meaning of the name “Lazarus”—“God is my help.”  It describes in detail the confidence of those who trust in the Lord to liberate, heal, lift up those bowed down, protect strangers, and sustain the needy.  The one who lives this faith, like Lazarus in our Gospel, is “blessed.”  He “secures justice for the oppressed, gives food to the hungry.”  Those who trust in God’s generosity show generosity to others themselves.  The rich man in the parable should have known, from this psalm, as well as from the writings of Amos and all the prophets, that this is the way a faithful Jew lives the covenant God made with His people.  He had chosen a different way, the way of the wicked, which God “thwarts.” The way Lazarus chose is the way that sings, “Praise the Lord, my soul!”

We need to know the context of our epistle reading to understand its full force.  In verses not included today (see 6:6-10), St. Paul writes to St. Timothy, the young bishop of Ephesus, about how to best serve as a shepherd to the flock entrusted to him.  The whole epistle gives a wide variety of instructions about how to be a good pastor.  In this, St. Paul touches on the subject of money:  “Those who desire to be rich fall into temptation, into a snare, into many senseless and hurtful desires that plunge men into ruin.”  This is exactly the kind of teaching we would expect from an apostle charged with communicating Jesus’ Gospel to the world.  St. Paul goes on with another sober warning:  “For the love of money is the root of all evils; it is through this craving that some have wandered away from the faith and pierced their hearts with many pangs.”

Now begins our reading:  “But you, man of God, pursue righteousness.”  Our passage contains the antidote to love of money, which is love of virtue.  Here, St. Paul urges St. Timothy to “lay hold of eternal life.”  This is the heavenly perspective that will keep love of money in check.  This is the life the rich man in the Gospel ignored, the life of “righteousness, devotion, faith, love, patience, and gentleness.”

Why should we be willing to live this way?  Because we know that “God is [our] help,” as the name “Lazarus” says, and that we are awaiting “the appearance of our Lord Jesus Christ…To Him be honor and eternal power.  Amen.”

Possible response:  St. Paul, pray that I can mortify love of money in me whenever it appears; help me protect my heart from its “many pangs.”

One thought on “Twenty-sixth Sunday in Ordinary Time—September 29, 2013”