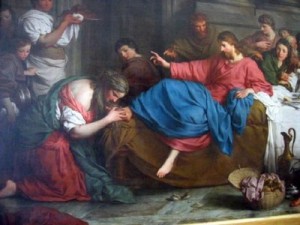 Jesus attends a dinner party; it turns into a lesson about forgiveness.  How?

St. Luke includes in his Gospel several references to Jesus dining with Pharisees (see Lk 11:37; 14:1).  On this occasion, there was a party crasher.  “A sinful woman in the city learned that [Jesus] was at table in the house of the Pharisee.”  Because of the action that follows, we understand that the woman must have had previous contact with Jesus.  She was quite probably a known prostitute or adulteress, a woman with a reputation.  Had she been in the crowds who watched Jesus work miracles?  Had she approached Him about her own need for healing and a new way of life?  Whatever the details, this woman had become a devoted follower.  Her gratitude for the change He made in her overwhelmed her.  Why else would a known sinner barge into the home of a respectable Pharisee to lavishly display her love for Him?  She risked being sharply rebuked and even tossed out of the house.  No matter.  She was determined to go to Jesus and express her love and appreciation for what He had done for her.  She would not be stopped.

Simon, the host, watches this surprising interruption unfold, and it fills him with cynicism about Jesus.  “If this man were a prophet, he would know what sort of woman this is.”  Jesus reads his thoughts and presents him with a quiz.  If there are two debtors, one with a huge debt and the other with a small one, and both are forgiven, “which of them will love more?”  Simon acknowledges that great forgiveness leads to great love.  So far, so good.

Jesus then turns the tables on Simon with a provocative question:  “Do you see this woman?”  It is the same kind of question he had silently asked himself about Jesus.  He thought surely a prophet would “see” the sinful woman and refuse contact with her.  Jesus, however, questions whether Simon has properly seen her, or even himself, for that matter.  The sinful woman has given Jesus the welcome that Simon, his host, failed to offer.  This helps us “see” Simon’s hypocrisy in inviting Jesus to his home.  Obviously, the invitation was meant only as a test for Jesus’ prophetic credentials.  There was no warmth of friendship in it.  The woman, however, fearlessly pours out her love on Jesus, using her whole body to anoint Him, even in the face of the criticism this was bound to stir up among righteous Jews.  Jesus explains that she loves this way because “her many sins have been forgiven.”  So, Jesus passed Simon’s test after all.  He did know “what sort of woman this is.”  She was a forgiven sinner who honored Jesus as a prophet because of His great compassion to her.  Simon, on the other hand, had shown little love.  Surely he had not been forgiven much because he hadn’t asked for forgiveness.  He didn’t know how needy he was; he didn’t think he was a sinner like the woman.

Jesus then speaks to the woman, who has not said a word during this encounter.  “Your sins are forgiven…your faith has saved you; go in peace.”  Jesus doesn’t forgive her sins because of her act of love;  she loves because He has already forgiven her (see CCC 2712).  The “others at table said to themselves, ‘Who is this Who even forgives sins?’”  Jesus has made explicit the relationship He has with the woman.  He has explained her outrageous behavior to everyone.  The risk she took upon entering the house was well worth it.  Jesus was able to demonstrate the difference between a hard heart that does not comprehend how needy it is, thus judging others harshly, and a heart of flesh, full of gratitude for being forgiven of sin, ready to return love for Love.

It’s a good lesson for us all.

Possible response:  Lord Jesus, this story gives such clarity to what You deserve from me for forgiving my many sins.  Please help me remember it.

We read here of God’s response to the terrible sin of King David, when he plotted adultery and murder for the sake of his own lust.  We can feel, in God’s words through the prophet, Nathan, the sorrow that enters into what had been such a wonderful relationship between them.  The Lord had given David everything, yet he “spurned” Him, like an adulterer does to a spouse.  This evil would have to be punished, of course.  David does not object:  “I have sinned against the LORD.”  His confession brings forgiveness:  “The LORD, for His part, has forgiven your sin; you shall not die.”  Temporal punishment for the king, who had gravely sinned, would be necessary because of his place of primacy in Israel.  The people would need to know that trouble begets trouble.  Yet because David confessed his sin, he would know God’s mercy, too.

When we see the importance of confession of sin in this story, it helps us imagine what had transpired between the sinful woman and Jesus in our Gospel story before she showed up at Simon’s house.  Had she poured out to Him her story of sin and rebellion against God’s law?  Had she heard from Jesus the mercy that David heard from the LORD?  Is that what had melted her heart?

Possible response:  Heavenly Father, thank You that Scripture is full of Your promise of mercy to those who acknowledge their sin

As we begin to think about the relationship between confessing our sins and receiving God’s mercy, we will find our psalm particularly appropriate today.  The psalmist says, “I acknowledged my sin to You, my guilt I covered not.”  He assures us that the one who confesses this way is blessed:  “Blessed is he whose fault is taken away, whose sin is covered.”  If repentance is the path for us to blessing and joy, let us sing with conviction today:  “Lord, forgive the wrong I have done.”

Possible response:  The psalm is, itself, a response to our other readings.  Read it again prayerfully to make it your won.

St. Paul helps us understand, in a theological way, the difference between the hard heart of the Pharisee and the loving heart of the sinful woman in our Gospel.  What was Simon’s problem?  He thought that by keeping all the rules of the Jewish law, he would be righteous (or “justified”).  The woman, on the other hand, knew that if justification is a result of keeping the law, she was lost.  Jesus came into the world to reveal the high standard of God’s law (that’s what the Sermon on the Mount was all about), making it clear that no one perfectly keeps that law.  We need a Savior!  Jesus loved us enough to be that Savior.  The sinful woman recognized this gracious gift and adored Him as a result.

See that St. Paul writes about this same truth:  “by works of the law no one will be justified.”  The law requires death for those who break it; Jesus died that death for us.  Our baptism joins us to that death:  “I have been crucified with Christ.”  A sinner who understands this gift of God’s love in the personal way St. Paul does (“the Son of God…has loved me and given Himself up for me”) will want only one thing:  to “live by faith in the Son of God.”  That’s what the sinful woman in the Gospel understood; now, so do we.

Possible response:  Lord Jesus, You love me enough to die for me.  Will I ever fully comprehend this?