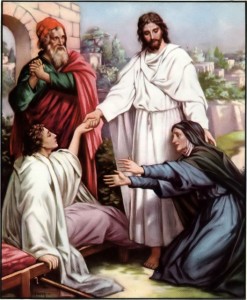 A weeping widow tells us a profound story.

The message left on the phone was terse and professionally uninformative:  “This is Chandler Regional Hospital.  Your son is here.  You will need to come over.”  Another message right after it, from my son’s roommate, gave me a few more details.  “Gary spent all night vomiting, and this morning he was deaf.  I had to take him to the ER.”  I couldn’t drum up any more information with the frantic calls I made before dashing out of the house.  On the ride to the hospital, I reviewed all the possible causes of such a strange situation—food poisoning, a mysterious bacterial assault, a tumor somewhere.  It stuns me now to think that the most obvious reason for Gary’s condition never crossed my mind at the time.  For the last five years, my son had struggled with drug addiction.  It began in high school, and it has haunted his life ever since.  Why didn’t I think of drugs when I got the message that all parents dread?  I suppose it’s because at the time, Gary had been sober for four months, attending AA regularly, living with a sober friend, and acting for all the world like a guy who has gotten his life back on track.  It has regularly been my mistake, during times of Gary’s sobriety, to believe that he’s been “fixed.”  I didn’t think about drugs because I thought that part of his life was over.  Again.

When I got to the hospital, I found that Gary had overdosed on heroin.  The drug had been mixed with lasix, a diuretic, which was causing his severe dehydration and deafness.   He was in the early stages of renal failure.  The doctor was not sure if Gary’s kidneys would stabilize.  He was put into intensive care, so I made quick calls to my husband and our priest.  That night Gary received the Sacrament of Anointing.  I had never heard the words of this sacrament before.  They were shafts of light in what had become nearly complete darkness for me.  Their comfort somehow penetrated my numbness.  I thought to myself, “These prayers can accompany the dead into eternity.  They surround a sinner with the victory of the Cross.”  I desperately needed this kind of comfort, because Gary had not practiced his Catholic faith for a long time.  He was the prodigal who still thought the pigsty might be more fun than his Father’s house.

Gary pulled through that night, but because he came so close to death in the midst of hideously unredeemed circumstances, I have had some occasion to think about that kind of death.  I have been sometimes comforted by the gospel story of the widow of Nain (Luke 7:11-17).  When we see Jesus there, He simply happens to come across a tragic scene–a weeping widow who has lost her only son.  She is deep in her grief, asking and expecting nothing of Jesus.  Yet Jesus, moved by her tears, does the unthinkable.  With a word, He raises the son to life (was the mother’s grief, for Him, a foreshadowing of the sword’s painful piercing of His own mother’s soul that lay ahead?).  I have often wondered about that son.  What sort of person was he before he died?  He could have been a good son, but he also could have been a wild rebel, a profligate, a crook, cantankerous, stubborn, and hell-bent on destruction.  It’s impossible to tell.  The mother’s tears don’t tell us anything but her grief.  It is beautiful beyond telling to see that Jesus’ pity for the woman meant life for her son.  I am always stirred by this.  “So, this is what Jesus is really like?  He’s touched by our own grief and tears?”  This gives me profound hope for those who leave this life accompanied only by our tears, prayers, and love.  I don’t think I could face each day, which holds within it the possibility of this kind of death for my son, if I didn’t believe what we see at work in this simple story.  It’s not that I expect my son to be saved by my tears, for each man must make his own choice of heaven or hell.  I do see, from the widow of Nain, that Jesus is moved by our love for sinners. So many of the miracles of healing and resuscitation He worked came as the result of the request of someone else.  Crying out for mercy on behalf of others lies at the heart of Jesus’ own work in the world.  Is He moved when He sees it in us, too?

At his bedside, I watched my son fade in and out as the priest gave him the Sacrament.  I knew he couldn’t hear us; I thought he might die that night.  What if I didn’t see any visible sign of grace at work in his life?  What if he passed into eternity as an overdosed heroin addict?  I had to count on the loving mercy of Jesus.  Because of the widow of Nain, this was not a long shot that night.  I have taught the bible for many years; I know so well that some of the greatest moments in redemption history have come when men are sound asleep.  In the Old Testament, Adam was asleep when God solved his only problem in the Garden, the need of a wife.  Abraham was asleep when God made His first covenant with him for the Promised Land.  Jacob was asleep when God renewed the covenant with him.  Joseph was asleep when he saw his future in Jacob’s family.  In the New Testament, Joseph was asleep when he was told to be Mary’s husband, father to Jesus.  The apostles were asleep when Jesus wrestled in the Gethsemane.  Who knows what the mercy of God can do in a person’s life when he is on the edge of the sleep of death, eyes closed and no longer able to communicate, but not dead yet?  Could we hope for the unimaginable, that Jesus could appear to the one for whom we’ve prayed in that sleeping state to call for the decision of heaven or hell?  Would anyone, seeing Him in that way, refuse His loving call to “arise” (Luke 7:14)?   Ask the widow of Nain.

Possible response:  Lord Jesus, thank You for teaching me this lesson from the story of the widow of Nain.  I have never forgotten it; it is with me always.

Here is another story of a mother’s grief turned to joy when her son is raised from the dead.  Elijah, the prophet, was staying in the home of a Gentile woman (he had been shunned by his own people in Israel).  The woman’s son gets ill and dies; the woman assumes this has happened as God’s punishment on her sin:  “Have you come to me to call attention to my guilt and kill my son?”  Sometimes people who do not know God well (remember, she’s a Gentile) believe that tragedies occur in this life to punish us.  Elijah will show her the real reason God allows tragedies to happen—they can open us up to see His power and glory.

Elijah prays for the life of the child.  He also expresses some exasperation with God”  “O Lord, my God, will you afflict even the widow with whom I am staying by killing her son?”  This is tinged with some of Elijah’s own frustration with his prophetic work.  Trouble dogged him wherever he went.  Who wouldn’t be grumpy with God?  However, even in his frustration, he did his prophet’s work:  “O, Lord, my God, let the life breath return to the body of this child.”

God answered Elijah’s prayer; he was able to give the son back to the mother:  “See!  Your son is alive!”  This miraculous reversal was enough to prove to the woman that Elijah was God’s man and thus able to do His glorious work:  “The word of the Lord comes truly from your mouth.”  She was a new convert to faith in Israel’s God.  He turned the woman’s mourning to joy, just as Jesus did for the widow of Nain and for the whole world.  The grief of a mother over the death of her only son represents all the grief of all the hearts that have ever been broken over physical or emotional death in a loved one.  Through our tears, can we see that there is hope and no need to weep?

Possible response:  Heavenly Father, You have proved Your love for us by raising Your Son from death and giving Him back to the world as Savior.  Joy!

If, because of our readings, we are thinking deeply about God’s promise to reverse the great grief in our lives, then we will love singing this psalm today.  It reminds us that although tragedies come to us, they do not have the last word:  “At nightfall, weeping enters in, but with dawn rejoicing.”  When our difficulties and losses lead us to cry out to God, we know He pities us and wants to help.  We can remember the widows of Zarephath and Nain, who could both say:  “You changed my mourning into dancing.”  Can we believe this about God?  If that’s a struggle, perhaps we should sing all the more loudly today:  “I will praise You, Lord, for You have rescued me.”

In this reading, St. Paul speaks of another kind of miraculous reversal—not from mourning to joy, but from unbelief and antagonism against the Gospel to faith.  In all the reversals of our readings today, we see that the power that generates them comes from God.  He does the unthinkable by raising dead sons to life and by converting a persecutor of the Church to apostleship.  The readings should focus our attention on this central reality.  God is able to step in and totally alter a situation, beyond our wildest imaginings.  We can count on this to be true in our lives; we will always be able to say with St. Paul that God, in all our difficulties, is “pleased to reveal His Son to me.”

Possible response:  Heavenly Father, help me remember that when I bog down in anxiety or sadness, it is always Your desire to reveal Jesus to me in my circumstances.  Help me look for Him.