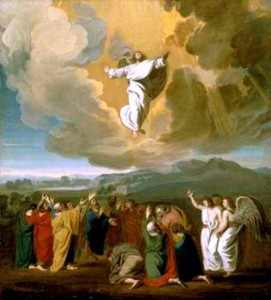 On Ascension Day, Jesus gives His apostles, a group of men singularly lacking in influence, a worldwide mission.  How would they be able to pull this off?

St. Luke tells us that as Jesus prepares to depart from His disciples and be taken up to heaven, He reminds them that God has always had a plan to save the world.  It was, over the course of centuries, written in the Old Testament Scriptures.  Much of it was fulfilled in Jesus’ time on earth, but not all of it.  What remained was for God to send His Spirit to renew the earth, long promised in passages like Isa 44:3, Ezek 36:26, and Joel 2:28-29.  Jesus had earlier, before His Passion, told the disciples that it would be good for Him to leave them because then He could send the Holy Spirit, the “Counselor,” to them, enabling them to be His witnesses (see Jn 16:17).  It had been the vocation of Israel to be God’s witness to the nations ever since He formed them as His own people.  They were to be a holy nation, a kingdom of priests (see Ex 19:6) to mediate the knowledge of God’s goodness to those who didn’t know Him.  Jesus renews that priestly vocation for His followers, with the specific Good News that “repentance for the forgiveness of sins” could now be preached in His Name to the whole world.  For this work, the disciples would need to “stay in the city until [they were] clothed with power from on high.”

We should recall how often Jesus spoke about things that were yet to happen to His apostles without them understanding what He said.  However, after the Resurrection, their confidence began to build that even what was mysterious or seemingly impossible in Jesus’ words had great significance.  Earlier Jesus had told them that the “Advocate” would come to them as the Spirit of truth.  Now, He tells them that this Spirit is also going to empower them to speak boldly of Him to all who would listen.  As Jews, the apostles would have known of the work of the Spirit in the Old Testament, who fell upon the prophets and made them God’s instruments (see Ezek 2:1-2).  Because Jesus had confirmed all that He had told them about His Death and Resurrection, they could now trust that His promise of the Spirit would most certainly be fulfilled.

The apostles go out to Bethany with Jesus (about two miles east of Jerusalem).  He gives them a priestly blessing before He departs (just as, in the person of the priest, He continues to give us His blessing as we depart from the Mass).  We see something new in their response to Him:  “They did Him homage.”  Before the Resurrection, we never see the apostles worship Jesus.  However, even on the very day of the Resurrection, when Jesus appeared to the women at His tomb, His followers understood that He was now to be worshipped in acknowledgement of His Divinity (see Mt 28:9).  Far from being in despair over Jesus’ disappearance from them, the disciples “returned to Jerusalem with great joy, and they were continually in the Temple praising God.”  They knew the story of Jesus was not over; in some ways, it was just beginning.

Possible response:  Lord Jesus, when I doubt You can use me to spread Your kingdom, help me remember that You started with just eleven disciples.

The first verse of this reading tells us that its author, St. Luke, wants to continue a story he began in his “first book,” the Gospel of St. Luke.  That book was devoted to a careful account of “all that Jesus did and taught until the day He was taken up” (Acts 1:1).  This book (Acts) will show us how Jesus could both depart from and yet remain with His followers.  The lesson begins with today’s reading.

We remember that even before His Passion and Resurrection, Jesus promised the apostles that Someone Else was coming.  Now He tells them explicitly not to try to get started on their mission to “all nations” right away.  They must wait for that Someone Else:  “John baptized with water, but in a few days you will be baptized with the Holy Spirit” (Acts 1:5).  The apostles’ first question about this event revealed them to be focused on the wrong thing (again):  “Lord, are You at this time going to restore the kingdom to Israel?” (Acts 1:6).  It was not unreasonable for the apostles to be curious about the restoration of the kingdom to Israel, as this was a Messianic hope of long-standing for the Jews.  Notice that Jesus doesn’t rebuke them for their interest in David’s kingdom, but rather for their desire to know when it will happen.  Jesus wants them instead to focus on their own work of being His witnesses:  “You will receive power when the Holy Spirit comes upon you, and you will be My witnesses in Jerusalem, through Judea and Samaria, and to the ends of the earth” (Acts 1:8).  Ironically, this work He gives them will actually bring about the restoration and fulfillment of the kingdom they earnestly seek.  In due time, they will learn that this kingdom, as Jesus had told them earlier, is not of this world.  The kingdom Jesus rules is not ethinc; it is not confined to the borders of Israel.  Through the preaching of the Gospel, Jews of all the tribes of Israel would find their way to it, as would Gentiles.  His kingdom is the universal Church, spread out everywhere, “to the ends of the earth.”

Then, as the apostles were “looking on, He was lifted up, and a cloud took Him from their sight” (Acts 1:9).  What does this mean?  It helps to understand the symbolic significance of the “cloud” Jesus entered.  It reminds us of the Transfiguration, when we get a glimpse of the glorified Jesus.  It reminds us, too, of the “overshadowing” cloud of God’s presence in the worship of the Old Testament Tabernacle, filling the Holy of Holies as God and man met.  That same cloud of God’s presence led the people of Israel to the Promised Land.  As Pope Benedict XVI tells us,

This reference to the cloud is unambiguously theological language.  It represents Jesus’ departure not as a journey to the stars, but as His entry into the mystery of God.  It evokes an entirely different order of magnitude, a different dimension of being… He enters into communion of power and life with the living God, into God’s dominion over space.  Hence, He has not gone away, but now and forever by God’s own power He is present with us and for us.  (Jesus of Nazareth:  Holy Week, Ignatius Press, pgs 282-283, emphasis added)

Now we get it!  Jesus’ departure has only been a departure from our mode of existence.  It is not cosmic but metaphysical.  That is how He can be gone and yet still with us.  In promising the apostles to send the Holy Spirit, He promises not only this new kind of presence with us but also a share in the great power of which He spoke in the Gospel reading.  Did the apostles grasp this?

Not exactly.  We see them staring off into space, probably trying to take it all in.  Two angels caution them against “standing there looking at the sky” (Acts 1:11).  Jesus has ascended into His rightful power and authority, having finished His earthly work for our Redemption.  The apostles will not have to stare at the sky to see Him return in power (the meaning of the “cloud”).  They will see Him return in power very soon—on the Day of Pentecost.

Jesus reigns on His throne now!

Possible response:  Lord Jesus, it is a mystery to me how You can be gone and yet entirely present to me always.  Help me believe it.

It is impossible to read through this psalm without wanting to “clap your hands, shout to God with cries of gladness.”  When it was written, it rejoiced over God’s exalted reign over all His creation.  Now, it expresses the jubilant praise of God’s people for the victory won by Jesus and His ascent to His rightful place of power and authority at God’s right hand.  Ascension Sunday is the day for us to celebrate our God’s reign over all creation.  The challenge for us now, of course, is to believe this is true.  When we look around us, sometimes it is hard to see that Jesus, the King, is now establishing, expanding, and strengthening His kingdom on earth.  Believe it!  Let this psalm be our antidote to doubt.  We should sing out the response with all our hearts on this day:  “God mounts His throne to shouts of joy:  a blare of trumpets for the Lord!”

Read these verses carefully, and feel St. Paul straining to find language adequate to explain the dramatic, superabundant implications of our Lord’s Ascension into heaven.  This is actually St. Paul’s prayer for his convert friends in Ephesus (and for us, too).  What does he most desire for them?  He wants them to ponder deeply, with the help of God, “the hope that belongs to [God’s] call, what are the riches of His glory in His inheritance among the holy ones, and what is the surpassing greatness of his power for us who believe” (Eph 1:18).  This is exactly what we need on Ascension Day!  We need to feel St. Paul’s urgency over the difference it makes for our daily lives that Jesus is now seated on His throne, ruling over the world through His Church, “which is His Body, the fullness of the One Who fills all things in every way” (Eph 1:23).  St. Paul will not allow us to think of the Ascension as simply a line in the Creed we recite at Mass.  In every way he knows how, he wants to point us toward the hope, the riches, and the power that belong to us now because of the Ascension.  May his prayer for us become our own, for us and for all the Church, today and always.

Possible response:  Father, please grant me the understanding for which St. Paul prayed.  My problems seem much smaller when I remember that Jesus is on His throne.