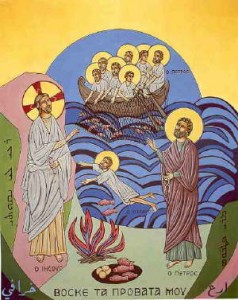 During Christ’s Passion, Peter stood near the warmth of a charcoal fire and denied knowing Him.  Today, Jesus and Peter meet again near a charcoal fire.  Why?

St. John tells us that an appearance of Jesus at the Sea of Tiberius (also called the Sea of Galilee) was “the third time Jesus was revealed to His disciples after being raised from the dead.”  As is always the case in St. John’s Gospel, there are layers of symbolism in the simple action described.  The disciples have already seen the Risen Lord, but they have not yet been commissioned by Him to make disciples of all nations (see Mt 28:15-20), nor have they received the promised Holy Spirit for the power they will need for this work (see Acts 1:4).  For now, they are still fishermen.  Surely they wondered what would come next.  With time on their hands and a living to earn, they decide to go fishing, which was usually done at night on that sea.

It was a fruitless night of work; they caught nothing.  At dawn, “Jesus was standing on the shore, but the disciples did not realize” that it was Him.  This is a common theme of Jesus’ post-Resurrection appearances.  The apostles have trouble recognizing Him (as we still do in the Eucharist, veiled as He is there).  See that He calls out to them with the term, “Children.”  By this first word of His address to them, He places the meaning of this episode within the context of the Kingdom His Father sent Him to build (recall that He taught the disciples to call God “Our Father” in prayer).  When they tell Him they have caught nothing, He directs them to cast their net in another direction, which results in a huge haul of fish.  Recall that at the outset of Jesus’ call to His disciples, it was a very similar action that drove Peter to his knees in recognition of his sin and Jesus’ holiness (see Lk 5:1-11).  John, who calls himself in this Gospel “the disciple whom Jesus loved,” knows instantly that the Man on the shore (the place of stability, as opposed to the frequent and unpredictable turbulence of the sea) is Jesus.  Peter immediately jumps into the water and swims toward Him, while the others get the boat and the full net back to shore.  Jesus has already set up a charcoal fire and is cooking fish and bread on it, but He wants some of the fish the disciples had caught.  This breakfast, then, is to be a combined effort of Jesus and His friends.  Peter drags up the net with one hundred fifty-three fish in it.  We have to wonder who counted them and why.  It is the kind of detail in St. John’s writing that usually has a deeper meaning.  St. Jerome tells us that at that time, Greek zoologists had counted one hundred fifty-three different kinds of fish.  This suggests that the full net represents the people the disciples would “catch”—all kinds of different people, from all nations, representing the whole of mankind, in the “net” of the Church that won’t break apart under Peter’s handling.

Jesus then cooks the fish and bread and feeds the disciples with it, calling to mind the feeding of the five thousand in Jn 6:1-14, these being the only two meals in the Gospel eaten by the Sea of Galilee and the only two where fish and bread are served.  However, Jesus had more on His mind than feeding His friends as He gathered them around the charcoal fire.  He wants to have a conversation with Peter, who had three times denied Him by the light of a similar fire (see Jn 18:18).  He repented with just one look from Jesus, crying tears of contrition and grief.  Jesus gives Peter three opportunities to confess his love for the Lord Whom he had denied; each confession brings a specific command to Peter to care for the flock entrusted to his care.  Jesus, the Good Shepherd (see Jn 10:1-21; Ezek 34), is about to depart.  We know He established Peter as the rock of the Church, entrusting him with the keys of the kingdom (see Mt 16:19).  By this charcoal fire, three times Jesus assures Peter that his denial has not disqualified him from his work of caring for God’s flock.  Jesus asks him to confess his love for Him, not his potential for heroics.  Peter now knows well his own weakness, and so does Jesus (“Lord, You know everything”).  In meekness and humility, he vows his love and nothing else.  Ironically, although Peter had once foolishly boasted about his willingness to die (see Jn 13:37-38), Jesus now describes the martyr’s death that awaits Peter.  He has learned that martyrdom for the sake of Jesus is a grace given by God, not something to be grasped in man’s own bravado, a difficult but necessary lesson.  Now, when Peter hears the same words he had heard three years earlier from Jesus, “Follow Me” (see Mk 1:17), he knows exactly what they mean.

Possible response:  Lord Jesus, help me remember that You seek my love above all else, a love expressed in obedience.

Here we see the apostles in a setting radically different from the seaside in the Gospel.  They had disobeyed orders from the Sanhedrim not to preach in Jesus’ Name.  Peter speaks out boldly to explain their actions:  “We must obey God rather than men.”  He simply declares that they have been witnesses to the miracle of the Resurrection and have no choice but to announce this Good News to the people of Israel, who had long awaited their Messiah, regardless of the consequences.

Ordered again to keep quiet, they were dismissed.  Rather than shrink in fear or flare out in aggression, “they left… rejoicing that they had been found worthy to suffer dishonor for the sake of the Name.”  Although the disciples were not setting out to be heroes—they only wanted to share the glory of the Gospel with others—it was granted them to follow in the footsteps of Jesus and become heroic in their suffering.

For Peter, this time, there was no boasting—only joy.

Possible response:  Lord Jesus, help me be willing to be a witness to the miraculous truth I know about You.

Here is a song of praise for deliverance from enemies, from the netherworld, from weeping and mourning.  Its words would be appropriate on the lips of Jesus, of course, as well as on the disciples’ lips.  In fact, Jesus and all who trust in Him (people like us) can sing today:  “I will praise You, Lord, for You have rescued me.”

Here we see Jesus in a setting radically different from the seaside in the Gospel.  St. John tells us of a vision of heaven given to him in which he sees “countless living creatures” crying out to sing praise to “the One Who sits on the throne and to the Lamb.”  This is the Jesus Who now reigns over His Church.  Jesus is conquering all His enemies; He is waiting for the day He will return to this world, finish His work, and celebrate with His Bride, the Church, into eternity.  Before the Sanhedrin, Peter and the apostles had confidence that the scene described here is actually true.  It gave them the courage to obey Jesus’ simple command to follow Him, given to them at the seaside and in every age to all people everywhere through the Church they built.

Will this obedience cost us anything?  Yes, it will, but if we remember that “worthy is the Lamb,” we will only rejoice if we are found worthy in this life to suffer for Him.

Possible response:  Lord Jesus, I need to remember this vision of Your glory and victory when my obedience to You costs me having my own way.