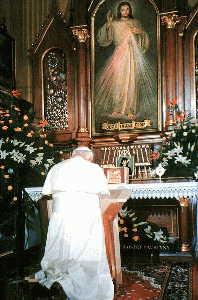 Today’s Gospel records a post-Resurrection appearance of Jesus in which His mercy to sinners begins to flow.  Watch out!  There is no stopping it.

The celebration of our Lord’s Resurrection on Easter Sunday usually focuses on the sheer ecstasy of His victory over death.  All during Holy Week, we are absorbed with the details of His horrific Passion.  When we reach Easter, our hearts nearly burst with joy that Jesus is alive and vindicated as God’s Son.  In other words, it’s easy to dwell on the fact of the Resurrection and be so dazzled by it that we do not think much beyond that.  The mercy of Divine Mercy Sunday (yes, intended pun) is that now we begin to meditate on the meaning of the Resurrection.  Today’s Gospel gets us started.

When Jesus miraculously appears among the apostles, we find they are locked in a room “for fear of the Jews.”  These fellows have not lately impressed us, have they?  His closest friends (Peter, James, and John) slept instead of keeping watch and praying in Gethsemane.  All the apostles except John fled the Crucifixion, and they were all reluctant to believe the witness of the women to whom Jesus first appeared.  Yet the word Jesus speaks to them is, “Peace.”  Then He commissions them to continue the work the Father sent Him to do.  If the Gospel reading stopped right here, we would still have enough information to knock us over backwards with joy:  Jesus loves sinners!  These men were often feckless and self-absorbed, yet when He goes to them, He gives them peace and joy.  Can any scene in the Gospels demonstrate more clearly than this one the meaning of Easter?

Jesus then does something truly astounding.  “He breathed on them and said to them, ‘Receive the Holy Spirit.  Whose sins you forgive are forgiven them, and whose sins you retain are retained.’”  What??  Are we prepared to see this in the story?  Jesus breathed His own breath on the very people who failed Him in His hour of need.  This action reminds us of God breathing into Adam’s nostrils His own breath at Creation, confirming him in “the image and likeness of God.”  Jesus establishes the apostles as those who will continue His divine work on earth.  In them, God will forgive or retain sin.  What can explain Jesus building a Church that is both human and divine other than the boundless mercy of God?

We find that one of the apostles, Thomas, was missing from this momentous occasion.  When he gets the report of it, he refuses to believe it.  He must see and touch the wounds of Jesus to be convinced.  We don’t know why Thomas doubted the men with whom he’d spent the last three years and who, along with himself, had been chosen as Jesus’ closest intimates.  His refusal to believe makes us uncomfortable, doesn’t it?   His doubt and cynicism don’t seem to come from a good place, yet Jesus appears and gives him precisely what he needs for faith.  Mercy!  This river of mercy is starting to gain momentum.  Jesus then helps us to understand where the river is headed:  “Have you come to believe because you have seen Me?  Blessed are those who have not seen and believed.”  This happy river is coming our way.    It will flow out to everyone, everywhere, in all times.  Those who believe in Jesus without ever seeing Him are going to be swept up in the torrent of God’s mercy for sinners.

If we have been slow on the uptake, St. John puts it all together for us:  “These [signs of the Risen Jesus] are written that you may come to believe that Jesus is the Christ, the Son of God, and that through this belief, you might have life in His Name”.  The meaning of the Resurrection is the triumph of mercy and new life for sinners.  Isn’t this a great Day?

Possible response:  Lord Jesus, I know myself to be as weak, fickle, and hard-hearted as the apostles sometimes were; thank You for the mercy You offered to them and to me.

In the Gospel, Jesus told the apostles, “As the Father has sent Me, so I send you.”  We can see from this reading that He meant what He said.  Many “signs and wonders were done among the people at the hands of the apostles.”  The miracles, of course, led to conversions:  “Yet more than ever, believers in the Lord, great numbers of men and women, were added to them.”  Just as people had sought mercy from Jesus by touching the hem of His garment, so they “carried the sick out into the streets” in the hope that “when Peter came by, at least his shadow might fall on one or another of them.”  As He promised, Jesus continued to do His work on earth through the men He had chosen and commissioned to be His witnesses.  His plan for spreading His mercy to all people through His church worked.

Possible response:  Lord Jesus, thank You for two thousand years’ worth of Your mercy pouring into human history through Your Church.

Today, the psalmist simply cannot stop praising the mercy of God.  How appropriate that this should be our liturgical response on Divine Mercy Sunday.   The psalmist explains the cause of his joy in very few words:  “I was hard pressed and was falling, but the Lord helped me.”  Don’t these words describe the plight of all mankind, from Adam to us?  Ever since the Fall, we have staggered and tripped in our sin, completely unable to help ourselves.  Even the apostles, when Jesus most needed them, caved into fear and self-preservation.  Nevertheless, Jesus died for them and for us:  “By the Lord has this been done; it is wonderful in our eyes.”

Of course it is!  That is why our responsorial today calls us to “Give thanks to the LORD, for He is good; His love is everlasting.”

St. John shows us how Jesus’ river of mercy, which flowed immediately to the world through His Church, will not stop there.  St. John writes that he was “on the island of Patmos because I proclaimed God’s word and gave testimony to Jesus.”  He was in exile on a small island used by the Romans as a penal colony for criminals, persecuted as was Jesus.  However, he was “caught up in the spirit on the Lord’s day” and was given a vision of heaven.  In it, he saw “seven gold lampstands, and in the midst of the lampstands one like a son of man.”  This is a beautiful reference to the Presence of Jesus in the midst of His Church.  The lampstands probably refer to the “seven churches” to whom John’s vision is addressed (see Rev 1:4).  This appearance of Jesus to John was different from His post-Resurrection appearances, when the apostles were startled and confounded.  This appearance caused John to fall “down at His feet as though dead.”  Yet Jesus’ response to John is so familiar:  “Do not be afraid.”  In His mercy, He desires to give to His Church instruction as it experiences “distress” and is in need of “endurance.”  He wants it written down so that His Church will know that He has all power and authority on earth.  Divine Mercy reveals “what is happening and what will happen afterwards.”  In this revelation, Jesus tells us how our story will end as we struggle to be His people now.  The river of His mercy will flow into eternity, for He is “the first and the last” and is “alive forever and ever.”  Alleluia!

Possible response:  Lord Jesus, help me remember to not be afraid in the distresses we live through in Your Church.  Our future is secure because of You.