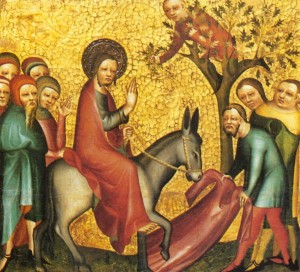 “Hosanna to the Son of David; blessed is He who comes in the Name of the Lord, the King of Israel.  Hosanna in the highest!” (Mt 21:9)

On Palm Sunday, Catholics all over the globe, in every nation and time zone, in public and sometimes in secret, stand at attention to hear the longest Gospel narrative of the entire liturgical year.  This riveting episode needs no interpretation.  Young and old, male and female, educated and uneducated, sophisticated and simple—all of us are caught up in the story and understand it.  Why is it so universally accessible?  The answer must be because it is a truly human drama, with the kinds of characters, action, plots and subplots, emotions, twists and turns that all of us know.  Who among us has not experienced something of betrayal, fear, humiliation, misrepresentation, powerlessness, malice from others, remorse, and dark foreboding?  This Passion story is not one told in philosophical, theological, or metaphorical language.  No, this story is our story, full of the truths of life that no one ever has to teach us.

Because of its length and density of details, a comprehensive commentary is not possible here (see Jesus of Nazareth:  Holy Week by Pope Emeritus Benedict XVI for a truly glorious examination of all the Passion Scriptures).  Still, many of us can be helped to stay attentive (we need help because, alas, we are like the apostles who kept dozing while Jesus agonized in Gethsemane) as it is read at Mass by pondering beforehand several of the story’s most fascinating themes:  isolation, innocence, and irony.

Isolation:  Although Jesus was nearly always surrounded by people in the various Passion scenes, we see how increasingly isolated He became, perhaps most startlingly even when He’s with His friends.  At the Last Supper, although Jesus told the apostles He eagerly “desired to eat this Passover meal with you before I suffer,” they were so unfocused and self-centered that “an argument broke out among them about which of them should be regarded as the greatest.”  How far away from Him they were in their hearts and minds!  Jesus knew this, of course.  When Peter vowed that he was ready to die with the Lord, Jesus warned him that before the morning arrived, he would three times deny even knowing Him.  It wasn’t only Peter, either.  The apostles completely misunderstood Jesus’ instructions about preparing themselves to continue His mission without Him and to be ready for long and arduous spiritual battle.  They thought He wanted them to take up arms and fight for Him with swords.  As He prayed in His agony on the Mount of Olives, His friends could not stay awake with Him.  His betrayal was by one of His own; a kiss that should have meant friendship meant death instead.  When Jesus had to carry His cross to “the place called the Skull,” a stranger, Simon of Cyrene, had to be pressed into service to help Him, so far were His friends from Him.  In death, His isolation was complete.  We know from other Gospel accounts that Jesus felt utterly, completely forsaken.

Innocence:  There is no avoiding the repeated testimonies, from all sorts of people, that Jesus was innocent of any crime.  He was the first to profess it, saying to those who arrested Him, “Have you come out against a robber, with swords and clubs?”  When Pilate interrogated Him, he told the crowd three times, “I found Him guilty of no capital crime.”  Herod, too, acquitted Him.  Even in His dying moments, one of the criminals hanging next to Jesus recognized that “this man has done nothing criminal.”  Finally, a Roman centurion who had “witnessed what had happened” proclaimed, “This man was innocent beyond doubt.”  The Son of God, the Son of Perfect Justice, became the willing victim of supreme injustice.

Irony:  By the time we get to the Passion narratives in the Gospels, we ought to be used to seeing irony (words or events that seem to mean one thing but actually mean something else) aplenty in our salvation story.  We know that Peter believed himself ready to go to prison and die for Jesus.  Yet, as Pope Emeritus Benedict XVI has suggested, it was Peter’s “heroism” that caused his downfall:

“But [Peter] must learn that even martyrdom is no heroic achievement:  rather, it is a grace to be able to suffer for Jesus… His desire to rush in—his heroism—leads to his denial.  In order to secure his place by the fire in the forecourt of the high priest’s palace, and in order to keep abreast of every development in Jesus’ destiny as it happens, he claims not to know Him.  His heroism falls to pieces in a small-minded tactic… He must learn the way of the disciple in order to be led, when his hour comes, to the place where he does not want to go (cf. Jn 21:18) and to receive the grace of martyrdom.” (Jesus of Nazareth, Part II, pg 71-72).

The crowd before Pilate clamored for Barabbas, a rebel murderer, to be freed instead of Jesus.  So, the guilty “son of the father” (the meaning of his name) was set free by the Divine Son of the Father, an ironic playing out of the meaning of the Crucifixion.  Finally, what Herod, the usurper king of the Jews, did in mockery as he put Jesus in “resplendent garb,” and what the Romans, likewise in mockery, wrote on His Cross, “The King of the Jews,” actually presented Jesus to the world as He really is—the true King over a kingdom that can only be gained through humility.  The authorities (those with power) all ridiculed this King; only a dying criminal could see the truth:  “Jesus, remember me when You come into Your kingdom.”

As we make our way through Holy Week to the glory of Easter, let us resolve not to isolate Jesus by our lack of focus, our density, or our sloth; to remember that the Innocent One stepped in to redeem us, the guilty; to embrace all the ironies of living the Christian life, as baffling as they can sometimes be.

Possible response:  Lord Jesus, please keep Your eye fixed on me this week.  I have it in me to fail You.

The prophet, Isaiah, because he lived during a time of great covenant unfaithfulness in God’s people (about the 8th century B.C.), had to deliver dire warnings of coming catastrophe unless the people repented.  He prophesied that judgment would inevitably fall, but Isaiah also spoke of a coming restoration, when their punishment would end, and the people would once again flourish in their land.  Remarkably, Isaiah’s prophecies included detailed descriptions of a Suffering Servant who would play a significant role in this restoration.  Through his innocent, willing suffering, the sin of the people would be forgiven.  Here, of course, we have an astounding Messianic prophecy of Jesus, the Innocent One Who suffered on behalf of all people, making our redemption possible.  There are several “songs” in Isaiah about this Suffering Servant.  Today’s reading highlights the determination of the Servant to stay the course set out for him, regardless of the physical violence and acts of degradation against him.  This prophecy was fulfilled in Jesus, Who “steadfastly set His face to go to Jerusalem” (Lk 9:51) and quietly endured contemptuous brutality, as we see in the Gospel reading.  Although Jesus wrestled in the Garden with His natural desire to avoid suffering, He rose from His agonized prayer to fulfill Isaiah’s words:  “I have not rebelled, have not turned back” (Isa 50:5).

Possible response:  LORD, I need the courage and perseverance of the Suffering Servant to do Your will when I face opposition.  Please grant me that grace in the Eucharist today.

We can’t read this psalm without being amazed at how accurately it describes some of the details of the Crucifixion.  That is why we understand it as a Messianic psalm, written by David, King of Israel, hundreds of years earlier.  David, like Jesus, was persecuted unjustly.  His enemies wanted to destroy him, and his suffering made him cry out, “My God, my God, why have you abandoned me?”  However, in a verse not included in our reading, David acknowledges that God has not forsaken him:  “For He has not despised or abhorred the affliction of the afflicted; and He has not hid His face from him, but has heard when he cried out to Him” (Ps 22:24).  This is the turning point of the psalm.  David goes on to see a time when he will be restored and be able to “proclaim Your Name to my brethren in the midst of the assembly” (Ps 2:25), even being able to “eat and be satisfied” (Ps 22:26).  In other words, David sees life after his suffering, something wonderful from God on the other side of it that will cause all Israel to “give glory to Him…revere Him” (Ps 22:23).  Is it any wonder, then, that this psalm was on the lips of Jesus as he was dying on the Cross?  The separation from God He experienced as He bore the full weight of all humanity’s sin made Him feel abandoned, as did David, but He had the hope of the psalmist, too:  “Posterity shall serve Him; men shall tell of the LORD to the coming generation, and proclaim His deliverance to a people yet unborn” (Ps 22:30).  We cannot doubt that this psalm, known so well to Jesus, gave Him courage as He drank His cup of suffering to its bitter end.

St. Paul gives us a summary of the Incarnation and, with it, a preview of what lies beyond the sober details of today’s Gospel narrative.  Jesus left His glory in heaven to become one of us, yet He became more “us” than we are ourselves!  God made us for obedience to Him, which would enable us to live in His “image and likeness” and be truly happy.  We, however, always choose disobedience, so, on our own, we never really reach who we actually are.  Jesus chose perfect obedience for us, even unto death.  Therefore, God gave Him the Name that will eventually cause every knee to bend and every tongue confess that “Jesus Christ is Lord.”  In all our other readings today, we see the Suffering Servant, stripped of power and glory, the very image of weakness and defeat.  In this epistle, we see King Jesus, exalted and glorified and worthy of praise—the perfect anticipation of the joy of Easter!

Possible response:  King Jesus, help me to believe that the way of humility and obedience is always the path to glory.