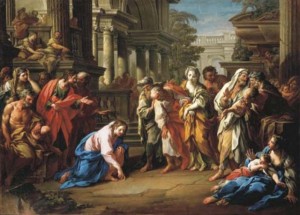 Today, Jesus is confronted by a trap.  It springs shut, but not on Him.  What happened?

St. John tells us about an incident that took place while Jesus was teaching in the Temple in Jerusalem.  “The scribes and the Pharisees brought a woman who had been caught in adultery and made her stand in the middle.”  They did this not because they were concerned about the woman’s morality but “to test Him.”  Why would this be a test?  Under Roman law, the Jews did not have authority to execute capital punishment, so if Jesus said they should stone her, He would be in trouble with the Romans.  In the Law of Moses, adultery was punishable by stoning, so if He forbade that, He would be breaking the Law of Moses.  His critics must have thought they had boxed Him into a corner.  They waited for the trap to close on Him.

At this point, it will help us if we know the context of our Gospel reading.  In the previous chapter (see Jn 7:37-53), Jesus proclaimed Himself to be the water for which men thirst:  “If anyone thirsts, let him come to Me and drink.  He who believes in Me, as the Scripture has said, ‘Out of his heart shall flow rivers of living water.’” (Jn 7:37-38)  This claim stirred up a big response.  Some people believed Him to be the Christ; others didn’t:  “So, there was a division among the people over Him; some of them wanted to arrest Him, but no one laid hands on Him.” (Jn 7:43-44)

A report of this was made to “the chief priests and the Pharisees.”  They were convinced Jesus was an impostor, even though the officers who had heard Him teaching in the Temple said, “No man ever spoke like this man!” (Jn 7:46)  The Pharisees would not be convinced.  Their hearts were set like stone against Him.  Out of this hostility came the trap we read about today.

The next thing that happens in this story surprises us:  “Jesus bent down and began to write on the ground with His finger.”  What?  Why would He do something that was seemingly so unrelated to the situation before Him?  Here, we find help from knowing a Scripture from the prophet, Jeremiah.  Hundreds of years earlier, Jeremiah had preached repentance to God’s hard-hearted people who had forsaken the covenant and resisted Him in every way.  Jeremiah wrote:

O Lord, the hope of Israel, all who forsake Thee shall be put to shame;  those who turn away from Thee shall be written in the earth, for they have forsaken the Lord, the fountain of living water.” (Jer 17:13; emphasis added)

Was Jesus thinking about this Scripture as He faced Jews who rejected Him as the Christ, who had reported Him to the authorities when He proclaimed Himself to be the fountain of living water?  Was He writing their names “in the earth,” as Jeremiah had prophesied?  His critics continued to badger Him, so He stood up and said, “Let the one among you who is without sin be the first to throw a stone at her.”  Then He resumed writing on the ground.  What had happened?

The trap laid by the Pharisees now sprang shut on them.  Certainly they thought of themselves as being “without sin.”  However, if they took up stones against the woman, they would bring down the wrath of Rome on themselves instead of on Jesus.  The oldest among them, the elders, were the first to realize that the tables had been turned; wisely, they and all the others left, one by one.  They had tried to trick Jesus into looking like a sinner who had no regard for Moses’ law.  Now, it was they, by their departure, who had to publicly assume the mantle of “sinner” in order to avoid a worse fate at the hands of the Romans.

With His critics gone, Jesus speaks to the woman who had been used by them in their plotting.  There was no one left to condemn her.  Imagine what it was like for her to hear His words:  “Neither do I condemn you.  Go, and from now on do not sin anymore.”  Jesus did not condemn the woman (which means He did not belittle, shame, or humiliate her), nor did He condone her sin.  He knew that her encounter with Him that day could change her life forever.  Her past was behind her.  She was ready for a new life, given to her so personally by Jesus.  He turned her most terrifying moment into her most magnificent one.

Possible response:  Lord Jesus, I know that I need not fear being honest with You about my sin.  Thank You.

Isaiah, the prophet, called God’s people to repentance during a time of great unfaithfulness.  He had to warn them of the discipline they would face if they didn’t repent.  However, God’s discipline of His people is always meant to rehabilitate them (see Heb 12:6).  Isaiah reminds them of how God once delivered them from slavery by opening “a way in the sea.”  The Red Sea became a source of “living water” for the Israelites as they fled the wrath of Pharaoh.  God, through Isaiah, promised to once again make a new life for His people, after their punishment in exile:  “See, I am doing something new!”  He vowed to “put water in the desert and rivers in the wasteland for My chosen people to drink.”  This promise was fulfilled in Jesus.  That is why, hundreds of years after this prophecy, Jesus stood up to proclaim, “If anyone thirsts, let him come to Me and drink” (Jn 7:37).  Those who drink from His “living waters” are able to “remember not the events of the past” (as the woman caught in adultery was able to do), because, in Jesus, God is “doing something new.”

Possible response:  Heavenly Father, please help me believe that no matter how many times I fall, You can always do “something new” in me.

This psalm wonderfully expresses the joy of people like us, sinners seeking reconciliation with God in Lent:  “The Lord has done great things for us; we are filled with joy.”  How often in our lives we are “those that sow in tears.”  We cry over our sins and the sins of others.  Yet, because Jesus is the “something new” of God, sorrow and mourning will not have the last word over us:  “Although they go forth weeping, carrying the seed to be sown, they shall come back rejoicing, carrying their sheaves.”  Jesus said this, too:  “Blessed are those who mourn, for they shall be comforted.”

If we truly understand and believe that “the Lord has done great things for us,” can we ever be the same?

St. Paul is someone who knew firsthand what it was like to encounter Jesus, as the woman caught in adultery did, and receive a completely new life.  His former life (as a righteous Pharisee and persecutor of the Church) he considered “so much rubbish” in order to “gain Christ and be found in Him.”  St. Paul knew that righteousness does not come from keeping the law perfectly; it comes “through faith in Christ.”  This righteousness from Christ puts us on the path to “something new.”  It enables us to forget “what lies behind” and to strain “forward to what lies ahead.”  Because we have “been taken possession of by Christ Jesus,” we can confidently pursue “the goal, the prize of God’s upward calling in Christ Jesus.”

When we put our faith in Christ, we can go and “not sin anymore.”

Possible response:  St. Paul, please pray for me this Lent to walk in confidence, as you did, that Christ has taken possession of me so that I can press on to “what lies ahead.”