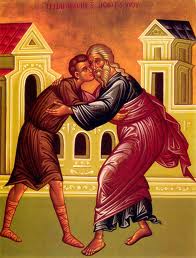 Today, Jesus’ critics level a charge against Him that unwittingly sums up the glory of salvation history.  What was it?

St. Luke tells us “tax collectors and sinners were all drawing near to listen to Jesus.”  Isn’t this a beautiful thought for us to ponder during Lent?  Now that we are well into this penitential season, we are no doubt uncomfortably familiar with our own weaknesses and our bent toward sin.  St. Luke wants us to know that as Jesus taught the great crowds that came to hear Him, He attracted those who were obviously not righteous, religious, respectable people.  Although Jesus called sinners to repentance, He did it in a way that drew those sinners to Him.  He must have spoken without shaming or humiliating them.  This became such a distinctive characteristic of His public ministry that the respectable “Pharisees and scribes” began to complain, saying:  “This man welcomes sinners and eats with them.”  Little did they realize that in this one criticism, they described exactly what Jesus had come to do.  All of the Old Covenant and all of the New Covenant tell this one magnificent story:  God, the Creator of all in heaven and on earth, welcomes sinners like us to share a meal with Him, now and into eternity.  The irony is mind-boggling!

This moment was not lost on Jesus.  Rather than defend Himself, He tells His critics a parable:  “A man had two sons… ”  We know this story as the Parable of the Prodigal Son.  It is, of course, a story about a wayward son who demands his inheritance from his father because, presumably, he wants to get very far away from him and so won’t be around when his father dies, but he doesn’t want to miss out on the money coming to him.  He has fun for awhile, but a famine strikes (a crisis out of his control and unforeseen, as crises usually are), and his “life of dissipation” catches up with him.  When he has lost everything, including his dignity, he comes to his senses.  As he fully experiences the consequences of all his foolish and self-serving decisions, he remembers his father, that good and righteous man who treated everyone, even his hired help, well.  He has a moment of repentance, rehearsing the words of his confession in his head:  “Father, I have sinned against heaven and against you.”  The humbled sinner recognizes that he has broken faith with God; he, a Jew, had physically and spiritually rejected the covenant into which he had been circumcised when he was an infant.  In addition, he had sinned against his father with his disrespect and greed.  He decides to go home, beg his father’s forgiveness, and work as a hired hand, forfeiting all rights to his familial relationship with his father.  This, of course, seems like a just arrangement as we listen to this story.  The son knows that he should no longer expect to live like a son in his father’s household.

At this point, the heads of the Pharisees and scribes were probably nodding in agreement.  “Serves him right to work as a slave.”  However, the story takes an unexpected twist.  The father is so exceedingly glad to see his repentant son that he treats him like royalty, dressing him in new clothes and throwing a party in his honor:  “Take the fattened calf and slaughter it.  Then let us celebrate with a feast, because this son of mine was dead and has come to life again; he was lost, and has been found.”  What did the Pharisees and scribes think of this?

We know exactly what they were thinking because of what happens next in the parable.  The older brother, who considers himself to have been an obedient son, is incensed at the father’s inordinate mercy to the younger brother who “swallowed up your property with prostitutes.”  The father, who has come out of the party to plead with his oldest son, reminds him that his reward, so to speak, for his obedience is that “you are here with me always; everything I have is yours.”  Had the older son been more than just dutiful in his relationship with his father—had he loved him with all his heart, strength, soul, and mind—he would also have rejoiced at his brother’s return from the dead.  Whatever made the father happy would have made him happy, too.  That’s how love works.

Jesus told his parable to remind His critics that God, the loving Father, has always wanted His beloved children to eat with Him—recall the Tree of Life in the Garden of Eden, the manna in the wilderness, the Bread of Presence in the Tabernacle and later in the Temple, the observance of the Passover throughout Israel’s history.  God has always desired to welcome repentant sinners, whose shame He has removed, to celebrate in a feast.  That is why Jesus instituted the Eucharist, which we will eat on our journey home until we arrive at the wedding feast of the Lamb.  Into eternity, we will be singing as praise what the Pharisees and scribes spat out in bitter criticism:  “This man welcomes sinners and eats with them.”

Possible response:  Lord Jesus, if You didn’t welcome sinners to Your table, where would that leave me?  Thank You.

In a powerful Old Testament foreshadowing of God’s redemption of us in Jesus Christ, “The Lord said to Joshua, ‘Today I have removed the reproach of Egypt from you.’”  What prompted God to say this to His people?  The Israelites, after many years of wandering (because of disobedience), had finally entered the Promised Land.  God had completely delivered them from the shame and helplessness (“the reproach”) of their bondage to slavery in Egypt.  Even in the wilderness, when the people returned to Egypt in their hearts by the idolatry they practiced, especially at Mt. Sinai with the golden calf, God forgave them and kept His promise to make them His own people in their own land.  When they entered Canaan, they observed Passover, the memorial sacrifice of their deliverance.  They slaughtered the Passover lamb and ate a meal of it.  At that time, they “ate of the yield of the land of Canaan.”  They no longer needed the miraculous manna God provided on their long journey home.

It is and will be the same for us.  In Christ, God has removed the reproach of our slavery to sin.  As His critics charged, Jesus “welcomes sinners and eats with them.”  For now, our meal with God is the Eucharist, but when we finally arrive home in heaven, we will no longer need the Eucharist.  A wedding feast is being prepared for us; we will sit at table with God Himself.  The celebration feast of our passing from death to life will be eternal.

Possible response:  Heavenly Father, thank You for removing the shame of my bondage to sin.  Please help me to live free.

It is fitting that our responsorial antiphon today is, “Taste and see the goodness of the Lord.”  A miraculous meal with God is evidence of His kindness and mercy to sinners.  In His generosity, He has made us “radiant with joy” and has removed our sin from us so that our “faces may not blush with shame.”  We have every reason to sing, “I will bless the Lord at all times; His praise shall be ever in my mouth.”

St. Paul sums up in a theological way what Jesus made clear in His parable:  “Whoever is in Christ is a new creation:  the old things have passed away; behold, the new things have come.”  As the father in the Gospel parable dressed his downtrodden, penniless, but repentant son in fine new clothes, so our Father, in baptism and confirmation, enables us to shed the old nature of sin and put on the new nature of virtue:  “For our sake He made Him to be sin Who did not know sin, so that we might become the righteousness of God in Him.”  God has always been working throughout human history to reconcile “the world to Himself in Christ.”  The apostles became ministers of that message of reconciliation.  Through apostolic succession, the bishops and priests of the Church continue to preach a truly life-changing message:  Jesus “welcomes sinners and eats with them.”  They “implore [us] on behalf of Christ, be reconciled to God.”  In Lent (and always), let us heed their call.

Possible response:  Heavenly Father, in Lent Your call to reconciliation with You is lovingly loud.  Give me ears to hear.