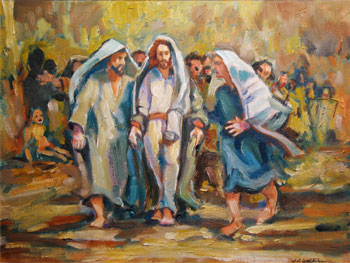 The people in Nazareth, Jesus’ hometown, wanted to kill Him after they heard Him speak in their synagogue.  How did familiarity breed such contempt?

St. Luke tells us that after Jesus read a Messianic prophecy from Isaiah in His hometown synagogue, He announced its fulfillment in the hearing of the congregation.  At first, “all spoke highly of Him and were amazed at the gracious words that came from His mouth.”  However, there apparently were some skeptics in the crowd.  They started to murmur among themselves:  “Isn’t this the son of Joseph?”  They had known Jesus all His life.  They knew His family.  They had seen Him every week in the synagogue.  Why was He claiming to be the Messiah?  This increasingly seemed outrageous to them.  Why should they believe Him?

Jesus understood the dynamic that was quickly developing among His fellow Nazarenes.  Instead of trying to explain Himself, He identified with the long-standing history of the prophets God had sent to His people:  “No prophet is accepted in his own native place.”  Then He poured oil on the fire by reminding the crowd that the Israelites to whom God had sent the prophets Elijah and Elisha were so closed off and resistant to their message that God finally sent them to the Gentiles, whom the Jews considered to be the worst of sinners, instead; they worked their miracles there rather than in Israel.  “When the people in the synagogue heard this, they were all filled with fury.”  Not only was the hometown boy claiming to be the Messiah, but He compared His fellow Jews to the hard-hearted people of the northern kingdom of Israel, destroyed hundreds of years earlier for their covenant unfaithfulness.  This was very insulting!  The people became convinced that Jesus had delusions of grandeur.  Mob rule took over.  They “drove Him out of the town” and managed to get Him to the brow of a hill, where they wanted to kill Him.  They must have believed Jesus deserved the Old Covenant punishment for being a false teacher (see Deut 13:10).  However, “Jesus passed through the midst of them and went away.”  His hour had not yet come.

Why were the people of Nazareth, who knew Jesus all of His life, so hard-hearted to Him?  We have to believe that His life prior to the start of His public ministry gave no indication whatsoever that He was the Messiah.  Even if Jesus was known to be remarkably virtuous and devout (very likely), the people who knew Him from childhood couldn’t believe that the Messiah would have such a lowly status.  A carpenter’s son as the Son of David, the king of Israel?  His claim that day in the synagogue seemed preposterous to them.  Their familiarity with Him convinced them He couldn’t possibly be the One for whom they were waiting.  His claims startled and then irritated them.

What Jesus saw in the synagogue crowd reminded Him of the many times in Israel’s history God had sent messengers to people who found reasons not to listen to them.  It did not surprise Him that He faced suspicion and opposition in His own hometown.  We wonder if His Mother, Mary, shared with Him how Simeon had described Him when His parents presented Him at the Temple:  “a light of revelation to the Gentiles and for glory to [God’s] people, Israel…this child is set for the fall and rising of many in Israel and for a sign that is spoken against” (see Lk 2:32, 34).

This prophecy, too, was fulfilled in the hearing of the Nazareth synagogue that day.

Possible response:  Lord Jesus, help me mortify the doubt in myself that can turn into hard-heartedness and drive You away from me.

Jeremiah tells the story of his calling to be a prophet by God, a calling that was certain before he was even born!  “Before I formed you in the womb, I knew you, before you were born I dedicated you, a prophet to the nations I appointed you.”  It was a calling that was to be full of pain and suffering for Jeremiah, because the people did not want to hear what he had to say.  He had to warn them that their covenant unfaithfulness would lead to utter destruction in Judah.  The Jews of his day thought it was ridiculous to think that God would allow the destruction of the beloved City of David, Jerusalem, or the “house of God,” the Temple.  They despised him and his message; he suffered great persecution.

God’s promise to him was sure:  “They will fight against you but not prevail over you, for I am with you to deliver you, says the Lord.”  We can see how Jeremiah was a foreshadowing of Jesus—a prophet also despised and rejected by His own people.  We can see, too, how God was with Him, as He promised to be with all His prophets.  In the Gospel, a murderous crowd was thwarted as Jesus simply walked away from death.  One day, the devil, too, would be thwarted that way.  Jesus, succumbing to death, rose up victorious and defeated it once for all.  Even death could not prevail over Him.

Possible response:  Heavenly Father, thank You for the courage of all the prophets, which came from their confidence in Your love and deliverance.

This psalm describes the comfort and protection God gives to those who are opposed by the wicked.  The response of the one who has put his trust in God from his youth is not to fight back but to take refuge in the Lord:  “Be my rock of refuge, a stronghold to give me safety, for You are my rock and my fortress.”  The love of God for those who trust Him in dire straits gives rock-like confidence, enabling them to sing:  “I will sing of Your salvation.”  That could be us today.

Many of us have heard this passage read at weddings.  It can become so familiar to us that we think we actually know it and thus close ourselves off to its power.  Familiarity with it means we can listen to it being read at Mass and not think there is anything there special for us.  Sound familiar?  We should be on guard against that kind of familiarity with Scripture readings, because it breeds a kind of hard-heartedness that spells danger, as we saw in the Gospel.

St. Paul describes not only the importance of love (it will outlast everything else), but also its definition.  Where in our lives are we most likely to let familiarity with people dull our need to love them like this?  Often, it is in our family life, with the ones closest to us.  As we read through and absorb these familiar words, let us ask for God’s help to let them be an antidote against hard-heartedness, wherever it wants to close us off from the good, the beautiful, and the true.

Possible response:  Heavenly Father, to love in the way St. Paul describes it will cost me my ego.  Help me be willing to pay that price today.